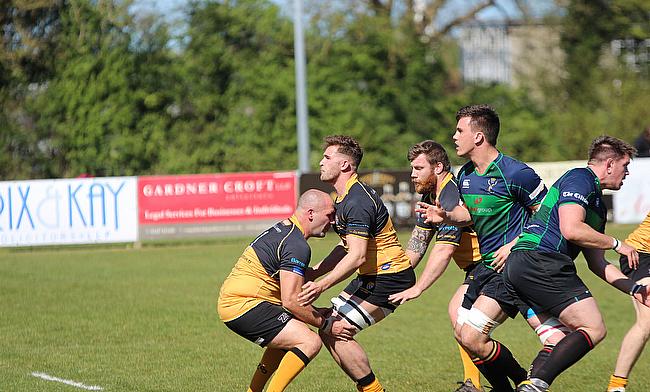 I don’t think there were many ‘shock’ results in National Two South from the opening weekend, but one certainly stood out.

‘You should never judge a book by its cover’ and Tonbridge Juddians smashed that stereotype into little pieces. If they were going to be in awe of this level, then they certainly didn’t show it last Saturday.

The newly promoted side ran riot against a now established National Two South side in Bury St Edmunds and they will be raring to go once again heading into Round Two.

The TJs are back in front of their own crowd this weekend as they host Canterbury while the only side ahead of them in the table right now, Redruth, take on Barnstaple.

Clifton will be aiming to build on an excellent draw against Chinnor when they go to Cinderford while, Taunton Titans travel to Old Redcliffians, Worthing visit Wimbledon and Redingensians host London Irish Wild Geese.

Elsewhere, it is an all Oxfordshire affair as Chinnor host Henley Hawks while Broadstreet open their home campaign against Bury St Edmunds.

Following a dramatic first season in National Two South, Barnstaple kicked off their second campaign at this level on a positive note. Steve Perry’s side claimed an excellent away win over newly promoted Wimbledon and they return to Pottington Road this Saturday aiming to build on a good start.

Barum won eight of their nine matches on home soil last season as they fended off relegation, but they will certainly have a tough test this weekend when Redruth take the long trip to Devon. The Reds are currently top of the league at this embryonic stage of the season following a ruthless display against Old Redcliffians in Pale Nonu’s first game in charge. Redruth sent out a strong message to the rest of the division six days ago and a win on their travels tomorrow would be a very neat and tidy start to the season for the men from The Recreation Ground.

Tonbridge Juddians certainly claimed the result of the opening weekend. A comprehensive 50-17 win over Bury St Edmunds was the perfect start to life in National Two South for the side that won the National Three London and South East title back in May. On their way to lifting the trophy, the Kent outfit lost just once and they welcome Canterbury to The Slade tomorrow having won 26 of their last 27 league matches.

The trip for Canterbury across Kent this weekend is about an hour and they’ll be hoping it will be a positive return journey especially after a tough defeat in Round One against Cinderford. The City Men were outclassed in the second period, but if they can reproduce their first half display this Saturday, then Andy Pratt’s men will be in with a great chance of claiming their maiden victory of the season.

The aforementioned Cinderford got their campaign off to a great start and will be aiming to continue that trend when they welcome Gloucestershire neighbours Clifton to Dockham Road. Paul Morris’ side got off to a slow start last term – which hampered their chances of seriously challenging for a return to National One – but after a year of adapting back to this level, they could be a serious force this term.

Cinderford won 10 of their 15 matches at home last season so this won’t be an easy task for Clifton tomorrow. Having said this, Darren Lloyd’s men may have thought the same when they hosted Chinnor last Saturday but they produced a performance of character and spirit to snatch a draw against the promotion hopefuls. The Lavender and Blacks certainly won’t roll over this weekend as they aim to avenge their 35-17 defeat in the corresponding fixture from last season.

It certainly wasn’t the dream opening weekend the Old Redcliffians would have hoped for. After waltzing to the National Three South-West title last season, the ORs were brought back down to earth by a rampant Redruth side last Saturday. Granted, Director of Rugby Kevin Coster and his coaching staff knew life at this level wasn’t going to be easy and it doesn’t get any simpler for the Brislington outfit as they host Taunton Titans in Round Two.

As we have seen over the last couple of years, Taunton Titans like to fly out of the blocks and in 2017/18, it seems like they aren’t about to stop that trend. Tony Yapp’s side saw out what was eventually a comfortable win over Broadstreet and they will be eyeing up new boys Old Redcliffians as their next victims. In fact, the Somerset side have only lost one of their last seven league matches.

Wimbledon’s first taste of National Two South rugby ended in defeat last weekend. The newly promoted side were beaten by Barnstaple on their own patch, but have the chance to clinch their maiden win at this level when they welcome Worthing Raiders to Barham Road on Saturday. Wimbledon lost just twice at home all season last term, and they will not want to repeat that feat as early as the second weekend of this campaign.

Worthing Raiders’ result against London Irish Wild Geese could prove vital as the season pans out, but it was the perfect start to the season for Jody Levett’s men. The Raiders and Wild Geese fought off relegation last term and in Worthing’s case, they will not want a third successive season fighting for survival. A third away win in 16 matches this weekend would certainly help put them on the right path.

Matt Williams and his side would have been disappointed after Round One. The men from Kingesy Road were leading by 14 points against Clifton heading into the final 15 minutes last Saturday, but saw their lead vanish and had to settle for a draw from their trip to Gloucestershire. It is the sort of game Chinnor ought to be seeing out if they are to challenge for promotion once again, but that frustration can be forgotten about with victory over Henley Hawks this weekend in the Oxfordshire derby.

In contrast, Henley Hawks were a side that profited from coming from behind last weekend. The Hawks overturned a deficit against Redingensians to clinch a 28-24 victory and now the men from Dry Leas face arguably their toughest test of the season. Chinnor were the only side across both National Two divisions not to lose a game at home last term and if Henley were to be the first side to beat them on their own turf since January 2016, then they may well be a side to watch out for this term.

Like Chinnor, Redingensians would have been kicking themselves on Saturday night. The Rams were excellent in the first half at Dry Leas, but allowed Henley to get back into the contest in the second period and they were made to pay the price. Now, Mike Tewksbury’s men must respond to that loss and aim for their first win of the season when they return to Old Bath Road to host London Irish Wild Geese.

Redingensians finished sixth last term so this won’t be an easy afternoon for the Wild Geese. They would have been hurting after being edged out by Worthing Raiders last weekend at Roundstone Lane, but they have another chance to clinch victory on the road this Saturday. The men from Hazelwood ended last season just a point outside the bottom three and won just twice on their travels, but their last win did come away from home against current table toppers Redruth, back in April.

After promotion from National Three Midlands last term, Broadstreet found out they would be plying their trade in National Two South rather than North. Their debut in this division was always going to be tough as they travelled 136 miles for their opening fixture, but against Taunton Titans, Broadstreet certainly performed well. They tailed off in the second half but there were positives to take into their first home fixture of the season against Bury St Edmunds.

In contrast, I am not sure if Ollie Smith and Kevin Maggs could take any plus points from Bury’s home defeat to Tonbridge Juddians last Saturday. In the club’s match report, they were complementary of TJs and rightly so, but the Suffolk side must now dust themselves down and go again this weekend in the Midlands. Bury ended last season with a win on the road against Clifton and they will be eager for a repeat of that this weekend at the Ivor Preece Fields.