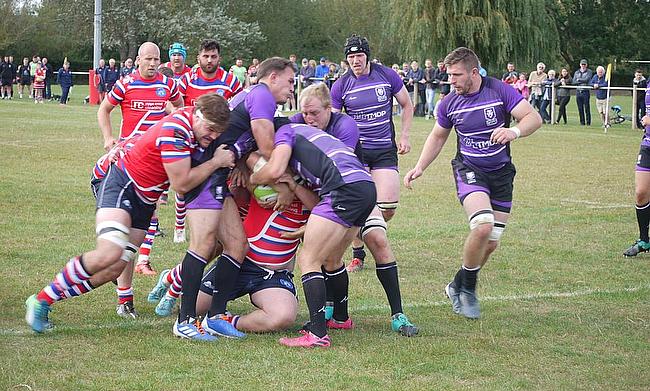 TJs beat Barnes away from home and Peter Dankert’s side now hold a one-point lead at the top as Henley Hawks moved into second-place following their hard-fought win at Dings Crusaders.

Clifton are very much part of this promotion race too as their fine form continued against Westcliff, who are now two points from safety at the wrong end of the table.

There was better news for rivals Sutton & Epsom who moved out of the relegation zone after securing a vital win against Bournemouth. This fixture was abandoned with less than 15 minutes to go due to a power cut, but S&E were awarded the win because they were 20-15 up and the game was in its latter stages.

Tonbridge Juddians have moved back to the top of National Two South following a bonus-point win at Barnes, who have slipped into the relegation places.

It took just six minutes for TJs to open the scoring as Rory McHugh dived over before Ryan Jackson touched down.

Myles Rawstron-Rudd responded for Barnes, but TJs still led 12-5 at the break.

Winger Murray Galbraith-Lowe touched down and Jackson grabbed his second, either side Josh Hammett’s consolation, as TJs regained pole position in this fascinating promotion battle.

Henley Hawks came from behind and held out Dings Crusaders in an enthralling contest at Shaftesbury Park.

Ewan Fenley scooted over for the visitors’ opening try, but Liam Appleton and then Gavin Curry hit back for Dings to give the home side the lead at the break.

However, the second period did belong to the aforementioned Fenley as the Hawks scrum-half scored on three more occasions in the space of five minutes to help Henley into a nine-point lead.

A try from Tom Anderson made it 24-20, but Henley were able to move clear of Dings as Tom Emery and Marcus Lowe both crossed on 69 and 73 minutes, respectively.

Josh Lloyd’s effort right at the death secured the Crusaders a well-earned bonus-point, but a scintillating response from Henley, and Fenley in particular, means the Hawks are just one point off the top.

The winger’s double, combined with some excellent defence in the second period, means the Lions have now won seven of their last eight matches and the Midlands club sit seven points off the top two.

Gary Kingdom kicked two penalties for Taunton on a frustrating afternoon for the Somerset club, but this will certainly not be the last twist in this compelling promotion race.

Henry Harper and Chris Levesley both scored twice as Clifton inflicted a nine-try defeat on Westcliff at Station Road.

Harper and Levesley continued their excellent recent form as the Lavender and Blacks concluded November with four straight wins.

9 tries! 😍
📸 Photos by Ian Clark. More online via our website

Westcliff replied with Sam Reynolds and Ewan Binneman both going over, but after last week’s high of beating Redruth, this was a harsh reality check for the visitors.

Redruth bounced back from their loss to Westcliff by beating Old Redcliffians at the Recreation Ground.

Redruth edged a scrappy first half thanks to Fraser Honey’s penalty and the attritional nature of the game continued in the second period.

Honey’s drop-goal doubled the tally for the hosts and Redruth’s work was ultimately done when Matt Shepherd crossed just before the hour.

Old Reds did try and salvage something from their trip to Cornwall, but the home side held out for the win.

[mpu-1] The hosts took an early 12-point lead thanks to scores from Cameron Gentles and James Booth, but they found themselves 20-12 down on 53 minutes as OAs roared back.

Harry Cavlan and Tom Bednall both dotted down, and combined with 10 points from the boot of Morgan Thompson, the visitors were now ahead in the contest.

However, it was Esher’s turn to take control and they took the game away from OAs in the final quarter as Matt Lowes, Booth and Tom Mitchell all crossed to secure a welcome win for Peter Winterbottom’s men.

Bury St Edmunds clinched a bonus-point win over Worthing Raiders in a pulsating clash in Suffolk.

Tries from Ethan Wilson and Alfie Garside, plus seven points from the boot of Kodie Drury-Hawkins, gave Bury a 17-5 lead at the interval.

Harry Forrest’s try for Worthing was matched by Garside, but Liam Perkins’ effort on 52 minutes brought the Raiders to within five points of their hosts.

However, Will Affleck and Dan Walsh touched down to take Bury clear once again before Perkins and Sam Boyland earned two bonus-points for the visitors with tries late on.

Sutton & Epsom have moved out of the relegation zone in National Two South following a vital win over rivals Bournemouth, but a floodlight failure caused the game to be suspended with less than 15 minutes remaining.

Bournemouth went in front via Grant Hancox’s penalty and the scrum-half kicked four more to give the visitors a 15-8 lead.

Sam Hurley had crossed for S&E and the momentum in this contest shifted just before half-time as Izaiha Moore-Aiono touched down to level the scores.

It was first blood to the hosts in the second period as Theo Skoumbourdis crossed and in the final quarter, a power cut hit Cheam and the referee had no option but to abandon the game.

With the match in its latter stages, Sutton were awarded the victory and it means they are now one point clear of the drop zone whilst Bournemouth sit nine points from safety.