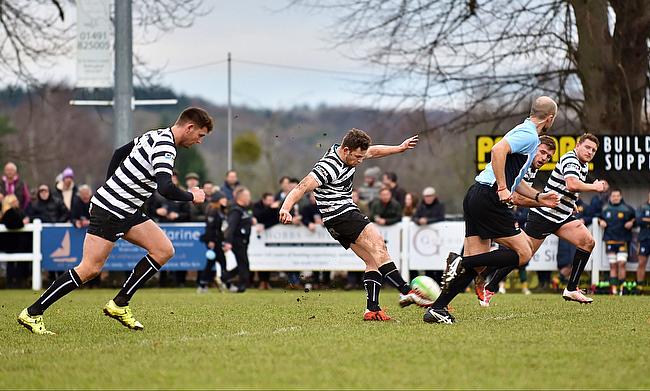 After a two week absence which contained just one fixture, National Two South is back this weekend with teams eager to get their campaigns back up and running.

Redingensians’ home clash with Wimbledon was the only match that went ahead last Saturday due to the severe weather and with the week off at the end February as well, it means a large bulk of these sides have not played for just under a month so they will be raring to return to action in Round 25.

At the top, Cinderford will be looking to edge closer to the National Two South title when they travel to Barnstaple this weekend whilst Chinnor aim to continue putting the pressure on the league leaders when they visit Wimbledon.

Speaking of the Dons, they are still fighting for survival in this division alongside the likes of Broadstreet, Old Redcliffians and Clifton while London Irish Wild Geese are also not clear of danger just yet.

Elsewhere, Redingensians will be hoping to hold on to third place when they take the trip to Redruth and it is all change at Bury St Edmunds as they prepare to host Henley Hawks.

“Cinderford are a club that should be in National One.” That is according to highly-rated centre Ed Bogue who was speaking to Gloucestershire Live  at the end of last month. The Foresters are currently leading the way in National Two South and they are 10 points clear at the summit with just seven matches in the season remaining.  Paul Morris’ side are also on a 17 match winning streak so it would take something remarkable for the men from Dockham Road not to gain promotion.

Next up for the table toppers on their quest to National One is a trip to Barnstaple. Barum head coach Steve Perry was pleased with his team’s performance against Redingensians last time out as they battled back to clinch two bonus-points in defeat. Perry told the club’s website that those points “do really count” at the end of the season and with the Devonshire outfit sitting 11 points clear of the drop zone, every point is vital at this stage of the campaign. That certainly applies to this weekend as Barnstaple aim for a positive result against the league leaders.

Recent triumphs have not been pretty for Chinnor, but at this stage of the season, any win is crucial no matter how big the margin of victory is. Matt Williams’ side are doing all they can to put pressure on league leaders Cinderford and also keep themselves in control of second spot in the table. Following their defeat to Paul Morris’ men at the end of January, the Oxfordshire side have battled hard to earn three straight victories.

Their recent results have kept them on track for a top two finish, but looking to scupper Chinnor’s progress will be Wimbledon as they continue to fight for survival in National Two South. Captain Dylan Flashman told us this week that his side are now becoming much more consistent and their recent results highlight his point. The side promoted from National Three last season won just one of their first 16 matches, but with key players returning from injury coupled together with more experience, the Dons have completely turned their season around. Despite their defeat to Redingensians last Saturday, Wimbledon have won five of their last eight games which leaves them five points off safety and with tough fixtures against Chinnor and Cinderford to come, the men from Barham Road will be hoping to still be in with a shout of survival by the beginning of April.

This week, Redingensians praised the efforts of Maidenhead RFC’s staff and volunteers after the Rams used their facilities to fulfil their National Two South fixture with Wimbledon last Saturday. The aforementioned clash was the only match that took place across the fourth tier of English rugby and Redingensians were doubly delighted as they clinched a 24-15 victory which lifted them to third in the table.

The Rams are now unbeaten in five games and head coach Seb Reynolds was pleased with his side’s cutting edge in tricky conditions. However, Redingensians will have to re-focus this weekend when they visit fifth placed Redruth. Last time out, an inspired performance from Alex Ducker helped the Reds secure a victory over Henley Hawks and while head coach Pale Nonu was happy with Ducker’s contribution, he was also proud of the way his team performed in a pulsating game at the Recreation Ground. That result saw Redruth consolidate fifth place in the table and also they extended their winning streak to three matches. They will be aiming to add to that run on their own turf this Saturday where they have lost just once this term.

With Taunton Titans not being in action last weekend due to ‘Storm Emma’, they slipped down to fourth place in table following Redingensians’ win over Wimbledon, but the Somerset side will be eager to respond when they host London Irish Wild Geese this Saturday. Head coach Tony Yapp was delighted that Taunton entered March on the front foot following a bonus-point win over Clifton last time out. The Titians were made to work hard to secure maximum points, but the result kept on course for a positive final two months of the term. Taunton have now won six of their last seven matches so they come into Round 25 full of confidence.

Whilst Taunton are currently experiencing a purple patch in form, their visitors this weekend are desperate for a result. After their excellent win over Barnstaple at the start of February, London Irish Wild Geese followed it up with a damaging defeat away at Wimbledon which means Lee Starling’s side are not out of the woods just yet. The men from Hazlewood are eight points clear of the relegation places and a run of just one win in six matches has seen them edge closer to danger. Wild Geese did pull off an excellent victory against Taunton earlier in the season so they will be hoping for a similar result at the Commsplus Stadium this weekend.

Bury St Edmunds have not had a game since February 17th and a lot has happened at the Haberden since then. Before their clash with Canterbury last month, Ollie Smith stepped down as head coach due to family commitments. The Wolfpack then went on to beat Canterbury that same week and they also announced Jon Curry as their new man at the helm. Added to that, Bury have recently announced six new signings for next season!

Here is the team named by Jon Curry for his first game in charge as the Wolfpack host @HenleyHawks tomorrow in round 25 of @nca_rugby #Nat2S. pic.twitter.com/C4rhknoYKh

But in terms of the management of the side, Smith has left Bury in a good place and Curry has already stated that he is aiming for a best ever finish for the club who currently sit sixth in the table. His first assignment as head coach is a home fixture with Henley Hawks who come into this clash after a February which they’d rather forget. Three straight defeats last month has just halted the Hawks’ progress up the table and they head into this encounter currently occupying seventh place. Pete Davies’ side have certainly made progress this season after finishing in the bottom half of the division last year and Henley will be keen to return to winning ways. A fifth away victory of the campaign would see them leapfrog Bury this weekend.

Last time out, Tonbridge Juddians came from behind to beat Worthing Raiders as Hugo Watson grabbed the headlines with a hat-trick of tries. It was another important win for the TJs as they moved back into the top half of the table to continue their brilliant season at this level. Across both National Two divisions, the men from the Slade are the best performers in terms of sides who were promoted from National Three last season and their excellent progress shows no signs of coming to an end.

TJs have lost just two of their last nine games and their opponents, Old Redcliffians, are also stringing together a sequence of positive results. The men from Scotland Lane are still battling to stay in this division and as things stand, they are just four points from safety as we enter the final two months of the season. Old Reds might have lost three of their last four games, but vitally, they have picked up bonus-points against Henley Hawks, Redingensians and Chinnor to allow them to keep chipping away at the teams above. A tough test awaits Old Reds this weekend, but their recent grit and determination could see them grind out a fifth home win of the campaign.

After their postponement against Canterbury, Worthing Raiders are on their travels this Saturday as they head north to face Broadstreet. This will be the Raiders’ first visit to the Midlands club so they will be hoping for a repeat of their 42-14 win at Roundstone Lane back in November. As things stand, Worthing are ninth in the table and they have already surpassed their points total from the last campaign so they may be aiming to finish this season in the top half.

Whilst Worthing set their sights on their best finish in three seasons, Broadstreet are staring at an immediate relegation. Currently, Street are bottom of the division and 14 points off safety with seven games remaining. Despite some spirited performances in recent weeks, time is running out for Paul Hurst’s side, but a result on their own patch this weekend could give them a glimmer of hope.

Canterbury host Clifton this weekend aiming to end this season on a positive note. It is now three weeks since the City Men last played and they come into this fixture on the back of a defeat. Andy Pratt’s side were well beaten by Bury St Edmunds which means they have won just one of their last five matches. The Kent outfit will need to improve upon on their form if they have ambitions of finishing in the top half and another side which is also desperate for a change in fortunes are Clifton.

After their last match on February 17th, Chairman Wyn Tingley stated he was very proud of Clifton’s showing in their narrow loss against Taunton Titans, but it was unfortunately another defeat for the Gloucestershire outfit. Clifton enter the final two months of the season just five points clear of the drop zone and they have also lost 13 of their last 16 matches. Granted, two of their triumphs in that run have come in their last six games, but with the teams below them all starting to pick up points, winning needs to become more of a habit for Clifton.