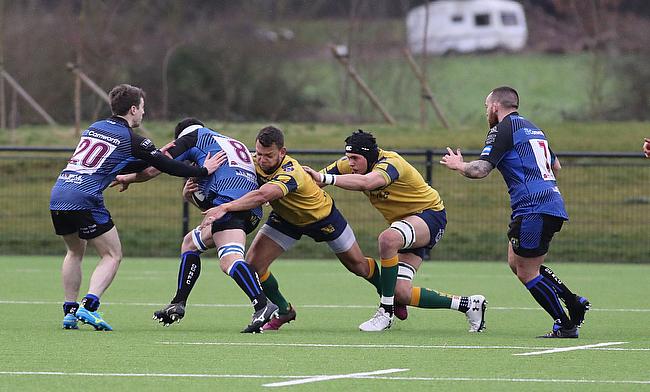 All five of the division’s newcomers tasted defeat on the opening weekend of the new National Two South season.Photo Credit: (Steve Karpa)

Promoted clubs Sutton and Epsom & Bournemouth suffered heavy defeats on the road against Henley Hawks and Taunton Titans, respectively, whilst Westcliff were left heartbroken as Dings Crusaders snatched a dramatic win in Essex.

Esher, who were relegated from National One, were beaten narrowly by Redruth whilst Leicester Lions lost to Tonbridge Juddians in their maiden campaign in National Two South.

Elsewhere in Round One, Old Albanian produced an assured display to beat Bury St Edmunds, Clifton left it late to defeat Barnes and Worthing Raiders came from behind to clinch a win against Old Redcliffians.

A strong first half performance saw Henley Hawks stroll to an opening weekend victory over newly-promoted Sutton and Epsom.

A hat-trick from Jack Robinson plus tries by Liam O’Neill, David Hyde and Sam Lunnon helped the Hawks to a commanding 34-0 lead at half-time.

Hyde grabbed a second after the interval before Perry Jansen crossed the line to get Sutton and Epsom off the mark.

However, Henley refused to take their foot off the pedal and wrapped up a convincing win through Ewan Fenley.

The home side ran in seven tries with Charlie Williams, Oliver Down, Brett Harvey and Julian Salvi all going over before the break.

Kingdom converted two of the tries and also landed two penalties during the first half as the hosts controlled proceedings.

The fly-half did miss the conversion for Harvey’s second effort following the interval, but pinged over the extras after Tom Popham and James Tait had both darted over.

For Bournemouth, they actually took the lead in this contest following a first minute-try from Fred Gleadowe, but Ben Roberts’ second-half effort was all they could muster up in Somerset.

Tonbridge Juddians kicked off the new National Two South season in style as they beat debutants Leicester Lions at the Slade.

The Lions have been moved into the south division for this campaign, but this was not an ideal start for Gareth Collins’ side.

Tout and Truman Sullivan added touchdowns in the second period, while Will Robinson kicked four conversions and a penalty.

The Lions’ points came in the shape of two Oli Taylor scores on a tough afternoon for the Midlands club.

Old Albanian got off to a winning start in National Two South as they defeated Bury St Edmunds at Woollams following an impressive performance.

Tries from Aaron White Martinez, Ned Warne, Joe Butler and Morgan Thompson put the OAs 24-7 up at half-time, with Ben Leng crossing close to the interval for Bury.

Scores via Nico Defeo and Dan Watt increased the margin to 38-7 before the away side hit back. Jack Harvey and Seb Dusi crossed for the Wolfpack, but they proved to be just consolations for Bury.

A try from Mike Uren with the game’s last move ensured Clifton snatched an opening day victory over Barnes in National Two South.

Uren’s effort came after 20 minutes of extra time as the Lavender and Blacks recovered to defeat Barnes at Station Road.

Tries from Alex Hind, Josh Davies, George Hunter and Cameron Ruddock looked to be enough for the visitors to leave Bristol with all five points.

But Fin Sharp, Luke Startford and Brad Barnes kept Clifton alive, before Uren dotted down after relentless pressure from the hosts.

Worthing Raiders overturned a half-time deficit to beat Old Redcliffians in Round One of the new National Two South season.

Old Reds led 15-11 at half-time, with tries by Aaron Rice and Dan Fry putting them in front at Roundstone Lane.

Henry Birch’s try and the boot of Matt McLean kept the contest in the balance, but the Raiders were able to pull clear in the second 40.

Three more McLean penalties combined with Sam Boyland’s effort put the hosts 27-15 ahead and even though Jermaine Jones darted over for Old Reds, Worthing were able to see the game out and secure an opening day victory.

Redruth registered an opening day win over recently relegated Esher thanks to a late try from Sam Stevens.

The Reds were ahead at the interval following Lewis Vinnicombe’s well worked try, but Esher hit back in the second half.

Gus Locke’s penalty and Delvin Hope’s try put the visitors 8-5 in front heading into the final quarter but as the game edged towards its conclusion, there was one final twist as Redruth’s determination allowed Stevens to power over right at the death.

Oliver Millner kept his nerve to kick Dings Crusaders to a victory against Westcliff on the first weekend of the new season.

The hosts led 19-3 at half-time time after a penalty from Millner was overshadowed by scores from James Smith, Greg Bannister and Kwame Kwassi.

Dings’ Tom Hargan and Westcliff’s Chris Bolton swapped scores after the break as the newly-promoted outfit maintained their lead, but the away side flipped the game on its head.

A second for Hargan and another penalty for Millner reduced the deficit to six points before the fly-half kept his cool to convert Alex Bilton’s last-gasp try which sealed a dramatic win for the Crusaders.