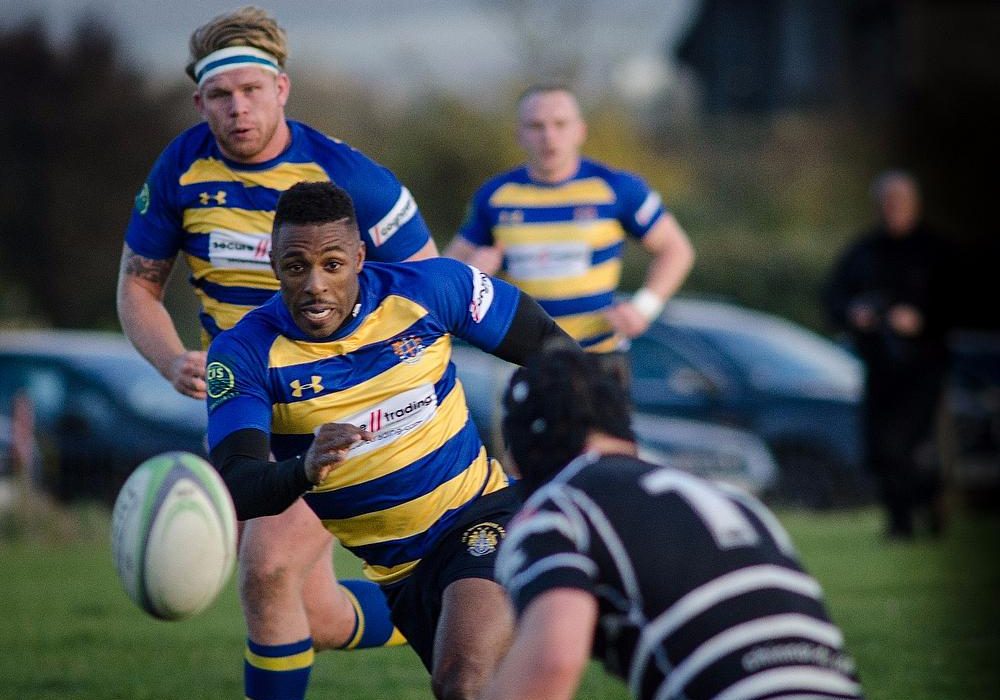 Old Elthamians secured a sensational win over Barnstaple to book their place in the National Two play-off next weekend against Sale FC at Heywood Road.

Gavin Lach’s side continued their superb performances of recent weeks as they thrashed Barnstaple to end an historic season with a chance of reaching National One.

At the wrong end of the table, the battle for relegation went down to the wire but it was Barnes who fell through the trapdoor despite a valiant performance against newly crowned champions Bishop’s Stortford.

That result at Silver Leys meant that the aforementioned Barnstaple as well as London Irish Wild Geese avoided relegation while a superb victory for Worthing Raiders against Exmouth kept them in the division.

Old Elthamians secured the play-off place in National Two South after a thumping 10-try win over Barnstaple, who avoided relegation despite this defeat at College Meadow.

Dom Lespierre produced an outstanding display as he notched up five tries while Max Wilkins grabbed a brace for OEs who have now scored 315 points in their last five matches.

George Messum, James Golledge and Hamish Barton also scored tries as OEs ran the Devonshire side ragged to set-up a play-off against Sale FC at Heywood Road next weekend.

Ryan Carter, Rob Dugard and Linford Brock crossed for Barnstaple in the second period, but Steve Perry’s side remain in this division after their first ever campaign at this level.

Chinnor ended their most successful season on a high as they beat London Irish Wild Geese, but Matt Williams’ men missed out on the play-off after Old Elthamians’ emphatic win.

The Oxfordshire side needed OEs to lose against Barnstaple and Chinnor had to pick up a bonus-point victory away at Wild Geese, but a rampant OEs gave Chinnor no chance of clinching second spot.

This was also a huge game for the home side as they were fighting to avoid relegation and despite a defeat, Wild Geese’s recent results were enough to keep them in this division.

First-half tries from Alex Bradley, Bevon Armtiage and Ali Bone put Chinnor 19-12 up after Wild Geese and pretty much matched their visitors in the opening 40 minutes with tries from Karl Gibson and Matt Killeen.

But Chinnor flew out of the blocks after the restart as Ben Manning and Henry Lamont both touched down to give the away side a 21-point advantage.

However, Geese rallied in the final 10 minutes to secure a bonus-point as Gibson grabbed his second try of the day before Scott Moore dotted down for the hosts.

Barnes performed valiantly against newly crowned champions Bishop’s Stortford, but defeat for the away side saw them relegated from National Two South.

The London outfit knew that they had to secure a victory at Silver Leys to stand any chance of beating the drop, but despite a spirited display, they will be playing National Three rugby next season.

Barnes fought back from 14 points down to level the match in the second half thanks to tries from David Butler and Robbie Martey, with Butler doubling his tally for the afternoon.

But Jimmy Rea’s try, adding to scores from Nick Hankin, Mark McCraith and Tom Coleman (in his final game for the club) handed Stortford the win.

Worthing Raiders ran in eight tries at they demolished Exmouth to avoid relegation on the final day of the National Two South season.

The Raiders knew they had to preferably secure a bonus-point win and they were also relying on other results to go in their favour, but it turned into the perfect afternoon for Jody Levett’s men.

Worthing managed to land five conversions, while Exmouth only managed a try through Mark Wathes.

Tries from Tom Vooght and Connor Corrigan as well as a Jacob Atkins penalty seemed to put Redingensians in control after a slow start which saw Freddie Fraser and Connor Harbison go over for the hosts, but Taunton replied with three scores after the break.

Arron Gibbs, Sam Prior and Fraser all crossed to leave Taunton 33-20 up before the Rams scored twice in the final 20 minutes to snatch two bonus-points from their trip to Somerset.

Redruth staged a spirited comeback on the final day of the season, but it wasn’t enough for them to clinch victory over Henley Hawks.

The Reds had a fourth place finish in their sights, but they trailed 20-7 at the break at Dry Leas thanks to tries from Tom Parton and Dave Hyde as well as 10 points from the boot of Joe Butler.

Redruth’s only score of the first period came on the stroke of half-time via Shaun Buzza, but they fell further behind as Parton grabbed his second try of the day eight minutes after the restart.

Then Redruth started to click into gear. A penalty try was swiftly followed by a score from Palepoi Nonu which reduced Henley’s lead to just eight points.

However, Alan Awcock’s try on 70 minutes ultimately won the contest for Henley because despite a second yellow card for Jake Albon, the hosts hung on even when Redruth’s Richard Brown crossed for a converted try five minutes from time.

Tom Best secured Canterbury a top eight finish in National Two South as his late penalty sealed the home side victory against a battling Cinderford.

James Moffat’s penalty in the final 10 minutes almost earned Cinderford a draw in a thrilling end of season finale in Kent.

Cinderford had led by four points in the second-half after tries by Alex Frame, Will Keenan and Harrison Yorke (2).

Winger Piers Richardson also grabbed a brace for Canterbury while Max Howard and Will Ferris were the other scorers for the hosts, but it was left to the boot of Best to clinch the win for the City Men.

Bury St Edmunds resisted a dramatic comeback by Clifton to end Gavin Hogg’s tenure at the club on a high as they clinched this narrow victory in Gloucestershire.

Clifton were 33-23 down with five minutes remaining at Station Road thanks to five tries from Bury scored by Dave Micklewaite, Ross Bailey-Kearney, Mat Selby, Harry Anderson-Brown and Darren Gillespie.

But Clifton fought back with a Mike Luxton try adding to scores from Dan Wells, Ian Clark and England Students’ Alex Giltrow to set up a grandstand finish.

However, despite the hosts exerting late pressure, their efforts were in vain as Bury held out for the win.