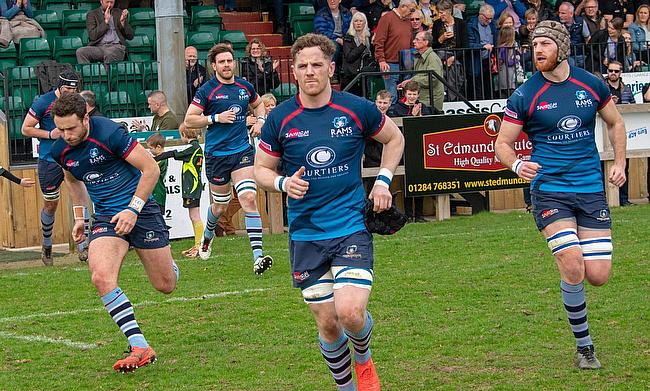 Seb Reynolds’ side were too good for the Bees and the league leaders are still 10 points clear of second-placed Canterbury.

The top five in National Two South all won in Round 15 while down at the bottom, Old Redcliffians’ upturn in form continued as they secured an excellent victory away at Redruth.

Rams RFC’s Ross Crame scored twice as the league leaders proved too strong for Birmingham and Solihull at Portway.

Crame snapped up his first try in the opening 40 minutes as Jamar Richardson, Alex Seers and Ben Henderson also crossed before half-time.

Conor Corrigan scored soon after the interval and further efforts from Crame, Greg Illingworth, Robbie Stapley, as well as a penalty try, completed the rout for the Rams who have now won their last 11 matches.

Second-placed Canterbury maintained their winning run in National Two South with a dominant victory over Barnes.

The City Man have now won eight games in a row and they set the tone in the first half as Ricky Mackintosh (2), Sam Sterling, Oli Best and Charlie Grimes put them 33-0 up.

Barnes prop Tom McArthur dotted down for the away side shortly after half-time, but Aiden Moss’ touchdown sealed victory for Canterbury.

Henley Hawks kept the pressure on Canterbury with a five-try win over Old Albanian at Dry Leas.

Leo Webb put the Hawks ahead, but Zaki Chamnaoui and Morgan Thompson scored as the visitors led 12-7 at the break.

The home side then produced a second-half blitz as Xavier Andre, George Griffiths, Samuel Randle and David Hyde all crossed to seal the result for Henley.

Brown claimed his first points after three minutes as he converted Nick Mason’s opener before Jacob Nash and Cory Teague both crossed for the hosts.

Taunton cut loose at the end of the half as Aron Struminski, Ratu Vakalutukali and Mason all crossed.

Brown (2), Nash and Struminski scored in the second half as Taunton recorded an impressive victory while Guernsey’s points came via George Shannon and Lewis Hillier.

Tonbridge Juddians extended their unbeaten run to seven matches as they ran in six tries to beat Clifton.

Hugh Campbell touched down for the game’s first try, but TJs ran in 32 unanswered points to take control of this encounter.

Mike O’Sullivan, Will Robinson, Finlay Coxon-Smith, Thomas Chapman and Duncan Tout all went over before Clifton responded through Bentley Halpin.

TJs had the final say as James Stanford crossed to wrap up another positive result for Peter Dankert’s men.

Old Redclffians are now nine points clear of the bottom three in National Two South after a superb win away at Redruth.

The hosts fell behind after 13 minutes following a Kieran Hill penalty and they were then 10 points down when Henry Bird darted over.

Despite the setback, a Jack Simmons try and a penalty via Richard Kevern levelled the game shortly after half-time.

Bird and Jermaine Jones both crossed to put Old Reds in the ascendency, but Matt Gidlow’s score on 74 minutes kept Redruth in touch.

However, a drop-goal from Hill made sure of the win for the men from Scotland Lane, who secured back to back victories.

Worthing Raiders ground out a welcome win over Dings Crusaders at Roundstone Lane.

The hosts managed to get the better of the weather conditions and Matt McLean’s fine penalty put Worthing 3-0 up at half-time.

The driving wind and rain didn’t help both sides in terms of try scoring opportunities, but the Raiders did manage to claim the decisive score as Harrison Sims’ try clinched a first victory in six games for Worthing.

Bury St Edmunds continued their upturn in results under head coach Nick Wakley after a victory over the 14-men of London Irish Wild Geese.

The Wolfpack, who have now won two of their last three games, led 19-5 at the break thanks to tries from Tom Brown, Mark Kohler and Alex Grey.

Josh Amadi had given the Wild Geese the lead, but their hopes of a win were severely dented when Chris Browne was sent-off on 28 minutes.

The hosts failed to add to their tally after the interval as Kohler grabbed his second to secure the victory for Bury against the league’s bottom club.