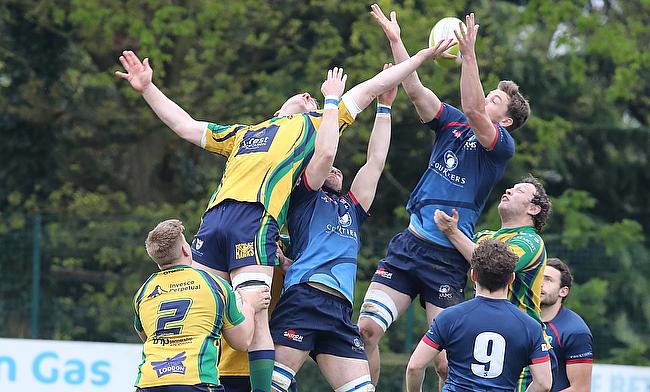 The Hawks had to battle hard for their win at home to newly promoted Barnes while it was a much simpler task for Rams RFC who thumped London Irish Wild Geese.

Redruth are the only other side who remain unbeaten in the division after a thrilling win over Taunton Titans while Bury St Edmunds, Worthing Raiders, Dings Crusaders, Canterbury and Birmingham & Solihull all kickstarted their campaigns with victories in Round Two.

Rams RFC maintained their 100 per cent start to the season in style as they secured a bonus point win over London Irish Wild Geese.

The early National Two South leaders scored seven tries, four of which came in the first half, against the Wild Geese at Hazlewood.

Ben Henderson, Jak Rossiter, Ross Crame and Jamar Richardson all touched down in the opening 40 for the Rams who led 24-7 at the break.

Scott Moore dotted down for the hosts, but that really was their highlight of the afternoon as the visitors continued to be clinical in the second period.

Henderson, Andrew Denham and Joe Duffelen went over as Seb Reynolds’ men continued their flying start to the new campaign.

Henley Hawks survived a late comeback to make it two victories on the spin after an excellent win over Barnes.

Tries from David Manning and Sam Portland saw Henley lead 14-3 at the break.

Bradley Cook’s try just after half-time continued the momentum for the Hawks, but two scores in four minutes from Ciaran Smith and James Morgan saw Barnes cut Henley’s lead to 19-17.

Henley kept their cool to edge further ahead on 74 minutes when Leo Webb touched down and despite Daniel Holmes’ late effort for Barnes, the home side were able to clinch the win.

Taunton Titans came agonisingly close to overturning a 14-point deficit, but they lost out to Redruth in a compelling contest at the Recreation Ground.

The home side looked to have put the game to bed having built up a comfortable lead on two occasions during the match, but Taunton kept coming back.

Three points from the boot of Richard Kevern and the first penalty try of the afternoon gave the Reds a 10-3 lead at the interval.

Dean Bonds and Aaron Simmonds both crossed to double Redruth’s advantage in the second period, but Oscar Kolowski’s effort and another penalty try brought Taunton back into the game.

Once again, Redruth stretched their advantage as James Tucker dotted down on 74 minutes, but Taunton weren’t going to leave Cornwall without any points.

Ratu Vakalutukali went over for the Titans before the third and final penalty try was awarded which handed Taunton two bonus-points right at the death.

OAs had thrashed Guernsey in Round One, but were brought back down to earth on their own patch as the Wolfpack clinched the victory in Hertfordshire.

Bury do the Double over Old Albanians. A 27-39 win at OA’s yield 5 points for the Wolfpack.https://t.co/cUqkhciz9j

The away side led 20-17 at the break thanks two penalties from Cameron Ritchie plus tries via Will Scholes and Mark Kohler.

Old Albanian were still very much in this contest following a brace from Alex Noot and they took the lead soon after half-time as hooker Jamie Townsend dived under the posts.

Bury hit back through a Ben Leng score, but OAs tied the game up at 27-27 when Dan Watt knocked over his second penalty of the afternoon.

However, the visitors were to have the final say as Jaid Wiltshire and Kohler both touched down to secure the victory for Bury.

Worthing Raiders sealed their first victory of the new season by beating Guernsey, but they were given a scare as the Island side threatened to comeback in the second period.

Worthing were helped into an early 7-0 lead thanks to a converted Grant Gatford try, but Guernsey responded almost immediately through Jason Batiste.

Kiba Richards crossed for the away side on 36 minutes to give them a nine-point advantage, but once again, the hosts hit back as Matt Thomas went over just after the break.

Two quick-fire tries from Jack Maslan put daylight between Worthing and the home side for the first time in the contest, but Guernsey came up with an answer yet again as Tom Ceillam and Alex Gow cut the deficit to two points.

However, with five minutes remaining, Worthing were able to ultimately secure the win as the experienced Matt McLean dotted down.

Dings Crusaders are up and running in National Two South after beating West Country rivals Clifton at Station Road.

In a closely-fought encounter, it was the newly promoted side that came out on top thanks to the boot of fly-half Ben Bolster.

Bolster’s early penalty was cancelled out by a Sam Harrison try and three points via Brad Barnes.

But it was Barnes’ opposite number who steered Dings to victory as three penalties after half-time from Bolster, adding to Harry Tovey’s try, saw Luke Arscott’s men secure their first victory at this level for just under four years.

Canterbury got off the mark in National Two South by beating their fellow Kent counterparts Tonbridge Juddians.

The hosts led 17-10 at the break thanks to a Ricky Mackintosh double and a score from Tristan King.

Aiden Moss and James Green crossed the whitewash in the second period for the City Men, who would have been delighted to bounce back after a humbling opening day defeat against Rams RFC.

TJs battled well throughout, but could only muster up tries from Hugo Watson and Will Colderick while last week’s match winner, Will Robinson, kicked 10 points.

Birmingham & Solihull and Old Redcliffians scored 11 tries between them at Portway, as the hosts secured their first ever win in National Two South.

Nathan Tilsley went over for the first and last Bees tries with Old Reds lock Chris Pursall scoring a brace for the away side.

Henry Bird, Jermaine Jones and Ethan Doyle added Old Reds tries, but it was the hosts who clinched the victory which moves them into ‘positive’ points after beginning the campaign on -5 points.