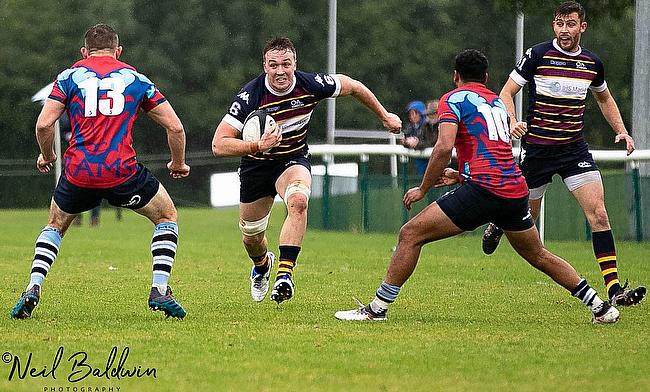 Rams RFC’s perfect start to the National Two South season came to a halt in Round Four after they lost to Old Albanian.

OAs victory over the Berkshire club allowed Taunton Titans to go to the top of the table after a battling win over newly promoted Birmingham and Solihull.

Bury St Edmunds are up to third after a strong performance against Barnes and Canterbury made it three wins on the spin as they comfortably beat Dings Crusaders.

Elsewhere, Tonbridge Juddians and Redruth secured tight away victories, Clifton triumphed over Worthing Raiders to end a mini losing streak and Old Redcliffians opened their account for the season away at London Irish Wild Geese.

Taunton Titans battled to a hard-fought win over Birmingham and Solihull to move to the top of National Two South.

The in-form Titans raced into a 17-6 lead at Portway thanks to a penalty try and a score from Chris Francis, but their advantage was cut before the break.

After two Jack Jolly penalties, Marcus Brown touched down to make it 17-13 and a try from Corey Venus just after half-time gave the Bees the lead.

Taunton replied through two Gary Kingdom penalties to put them 23-20 ahead with eight minutes remaining and the away side made sure of the victory when Aron Struminski dotted down late on.

Rams RFC suffered their first defeat of the season as Old Albanian ended their 100 per cent record at Woollams.

Alex Brown’s score saw the hosts extend their advantage shortly after the restart and despite conceding a penalty try 12 minutes from time, OAs held on for their second home win of the campaign.

The Wolfpack, who are now up to third in the table, were 14-7 ahead at the break following scores from Callum Torpey and Finlay Sharp.

Barnes did score through Joshua Davies in the first period, but they fell further behind immediately after half-time as Cameron Ritchie slotted over a penalty.

However, the away side set-up a grandstand finale after William Matthews dotted down on 77 minutes to make it 17-12, but Tuidriva Uru’s late score clinched the win for Bury.

Tries from Aaron Cooper, Oli Best and Sam Goatley gave Canterbury the lead in a first half where Jake Holcombe went over for Dings.

Both sides exchanged scores after the break with Ashley Challenger cancelling out Harvey Young’s effort, but tries from Jonathan Murray and Aiden Moss gave Canterbury another bonus-point win.

Tonbridge Juddians beat Henley Hawks to seal their first away triumph of the new season.

After losing the Kent derby in Round Two against Canterbury, TJs left Henley with the spoils in a close encounter at Dry Leas.

Will Robinson was the star man for the visitors as he kicked 14 points while Hugo Watson went over for their only try of the match.

A penalty try and a score from Alex Bradley was all Henley could muster up as they slipped to consecutive defeats.

Redruth fought back from eight points down to beat newly promoted Guernsey in a thrilling National Two South clash at Footes Lane.

Lewis Hillier powered over for Guernsey and the hosts maintained their momentum as Alex Gow slotted over a penalty.

However, three points before the break via Aaron Simmonds came at crucial time in the contest for Redruth as the visitors had the better of the second half.

A Ben Fox try and two more kicks from Simmonds gave the Reds a 16-8 lead, but Nick Merrien’s effort on 78 minutes set-up a nervy finish for Redruth.

However, Pale Nonu’s side were able to hold on and bounce back after their humbling defeat to Worthing Raiders in Round Three.

Alex Giltrow’s try gave Clifton the lead and a score from Henry Harper plus 10 points from the boot of Brad Barnes put the hosts in charge.

Alfie how you feeling being back in a playing jersey? pic.twitter.com/DNYbq0EWkw

Jon Dawe crossed for Worthing in the first period, but Clifton continued to be ruthless as Too’ala grabbed his brace either side of the hour to help the Lavender and Blacks to victory.

Curtis Barnes did score late on for Worthing, but it was merely a consolation.

Old Redcliffians sealed their first victory of the season as they beat fellow strugglers London Irish Wild Geese at Hazelwood.

Old Reds lock Chris Pursall was the day’s first scorer as he continued his strong start to the new campaign.

Reuben Knight and Kieran Hill swapped penalties, but home wingers Joshua Amadi and George Owen both scored to give Wild Geese the lead at the break.

However, that was as good as it got for the hosts as second-half tries from Craig Owen, Edmund Boxall and Ezra Caven sealed a much-needed victory for Old Reds.