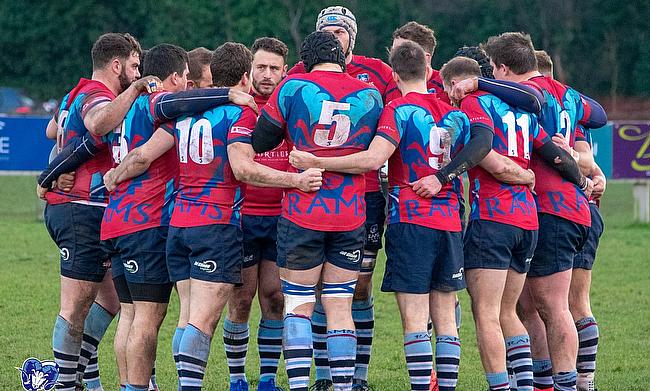 Rams RFC will have their sights set on another victory this weekend against Barnes as the National Two South leaders aim to write a new chapter in their history.

Seb Reynolds’ side have won 15 games on the bounce and if they were to add to their total on Saturday, it would set a club record for consecutive triumphs.

The Berkshire club have been irresistible this season and now the table toppers are 16 points clear, while the battle for second place has been thrusted into the spotlight.

Canterbury wrestled back the play-off position last weekend with a win over rivals Taunton Titans and they will be aiming to stay in the top two when they visit Worthing Raiders in Round 20.

Down at the bottom, Guernsey and Birmingham & Solihull will be keen to build on the excellent victories they picked up last weekend when they take on Clifton and Redruth while elsewhere, Old Albanian go to Old Redcliffians.

A record could be broken on Saturday. National Two South league leaders Rams RFC secured their 15th win in a row last weekend, which equalled the best sequence of victories the club has ever had. Their latest triumph was based on a superb defensive display as they grinded out a 19-3 win away at Bury St Edmunds meaning the stage is set at Old Bath Road for Seb Reynolds’ side to create a new piece of history in Round 20.

An amazing 15 wins in a row for @Rams_RFC – matching the club record – https://t.co/aOxkDHVcjf

Rams are also 16 points clear at the summit, but looking to burst their bubble will be a Barnes outfit who may well deliver some drama. In their last three fixtures, their results have gone right down to the wire with Barnes benefitting on two occasions. The London-based club managed to snatch a win at Old Albanian before rescuing a draw against Bury St Edmunds, but last week, the tables were turned as they lost in the last minute to Guernsey. The 12th placed side end the month by travelling to the league leaders, who haven’t suffered a defeat at home for over a year, so can Barnes upset the odds in Berkshire?

Last weekend, Canterbury returned to second place in National Two South at the first time of asking, but it was far from straightforward against promotion rivals Taunton Titans. The Somerset club produced a spirited fightback after half-time and nearly completed a remarkable turnaround, but they agonisingly missed a penalty in the last minute. A collective sigh of relief may have occurred at the Marine Travel Ground amongst the home support, but nevertheless, the City Men have their fate in their own hands once again.

Andy Pratt will be keen for his side to stay in control of their destiny when they travel to Worthing Raiders this week, especially after recent successive away defeats have threatened to derail their play-off bid. With that in mind, Worthing will be out to inflict another loss on Canterbury as they look to return to winning ways in Round 20. Jody Levett’s side have dropped down to ninth place after a disappointing loss to relegation-threated Birmingham and Solihull last week so the Raiders will be eager to end January on the front foot.

Taunton Titans so nearly stretched their unbeaten run to seven matches in Round 19, but a last-gasp penalty against fellow promotion candidates Canterbury went the wrong side of the posts as Tony Yapp’s side fell to a defeat for the first time since the end of November. The result for the Titans saw them drop down to third place in the table, but the Somerset outfit are only one point behind Canterbury as they prepare to host London Irish Wild Geese this weekend.

As for the visitors, they may well be in an upbeat mood when they arrive at the Commsplus Stadium. The Wild Geese defeated Dings Crusaders last time out to reignite their survival bid and the men from Hazelwood are now 11 points from safety after two wins from their last three games. The Wild Geese have also produced some encouraging performances against Taunton in recent times so the away side will be hoping they can end up on the right side of the result this time around.

Following back to back defeats to begin 2019, Henley Hawks returned to winning ways last weekend, but did so in dramatic fashion against Old Redcliffians. After leading 28-3 at half-time, the Hawks found themselves 31-28 behind with a quarter of the match remaining, but Nigel Dudding’s side showed their character to clinch their first win of the New Year.

Henley now sit just two points behind second placed Canterbury and the men from Dry Leas face another Bristol-based opponent this week when they travel to Dings Crusaders. After beating the aforementioned Canterbury in Round 18, Dings weren’t able to build on that result last Saturday as Luke Arscott’s side fell to a disappointing defeat against London Irish Wild Geese. It is now four losses from their last five games for the Crusaders, but back at Shaftesbury Park, they will be keen to conclude the month with another home victory.

Tonbridge Juddians’ defeat at the beginning of January against London Irish Wild Geese looks as though it was just a hiccup. Peter Dankert’s side have responded perfectly from that minor setback as TJs have secured excellent wins over Henley Hawks and Old Albanian to edge themselves into the promotion conversation. The men from the Slade are only six points behind second-placed Canterbury and a third win on the spin against Bury St Edmunds would only enhance any potential play-off talk.

“The atmosphere has improved and the whole vibe is really good."

After the arrival of a new coach and an upturn in form, @Will_Scholes has spoken ahead of Bury St Edmunds' clash with Tonbridge Juddians for our latest 'In Focus'. #Nat2shttps://t.co/R7xZlxp3qk

However, Bury will arrive in Kent still in good spirits, despite a narrow loss to Rams RFC last weekend. Nick Wakley’s men provided a stern test for the league leaders in Round 19, but their four-match unbeaten run did come to an end. However, the Wolfpack’s form since Wakley’s arrival at the end of November has seen Bury rise up to sixth place in the table so the Suffolk-based side will be hoping to add to the positive atmosphere around the club by defeating Tonbridge Juddians on Saturday.

Old Albanian were left bitterly disappointed after their humbling defeat against Tonbridge Juddians last weekend. Gavin Hogg’s side lost 57-12 at Woollams as they fell to their fifth defeat in a row and OAs season is in danger of petering out, even with 11 games still left to play. The Hertfordshire club had ambitions to challenge for an immediate return to National One, but now their main priority will be to end the final third of the season on a positive note.

In contrast, OAs next opponents are experiencing much better fortunes. Old Redcliffians come into this clash at Scotland Lane having won four of their last six games, with their latest result being a defeat against play-off chasing Henley Hawks. There were certainly positives for Saul Nelson’s side to take from that loss at Dry Leas, but Old Reds now sit 11 points clear of the relegation places after the bottom three sides all triumphed last weekend. There is still daylight between themselves and the drop zone, but Old Reds will want to maintain their cushion by securing a third home win on the spin.

If Clifton’s New Year’s Resolution was to begin 2019 in a positive manner, then they are certainly ticking all the boxes thus far. Three wins from their last four games has generated a renewed feeling of confidence at Station Road and Matt Salter’s side now find themselves eighth in the table rather than hovering above the relegation places.

Consecutive victories over Worthing Raiders and Redruth means Clifton head into Round 20 with momentum behind them, but their visitors may have a spring in their step when they visit the West Country. Guernsey halted a run of 12 straight defeats last weekend as they secured a last-gasp win over Barnes and it means the Raiders are 13 points from safety as things stand. Jordan Reynolds’ injury hit side know there is still a lot of work to be done, but they will also be aware that they beat Clifton earlier in the season so they will be hoping lightning strikes twice this weekend.

After beginning his return to Redruth with a victory over Guernsey, new Director of Rugby Nigel Hambly saw his side lose to Clifton last weekend. The Reds may have been kicking themselves for lacking a clinical edge at the Rec, but the defeat means the Cornwall-based side are now 10th in the table after seven defeats from their last eight games.

Things will take time to turn around for Redruth, but they can certainly start moving in the right direction if they can beat Birmingham and Solihull this weekend. The Bees may be in the bottom three and 13 points from safety, but they are showing great fight and determination to keep alive their survival hopes. A gritty victory over Worthing Raiders in Round 19 means Pete Glackin’s side have secured two wins in January so a hat-trick of triumphs would be an ideal way for Birmingham and Solihull to enter the final third of this campaign.