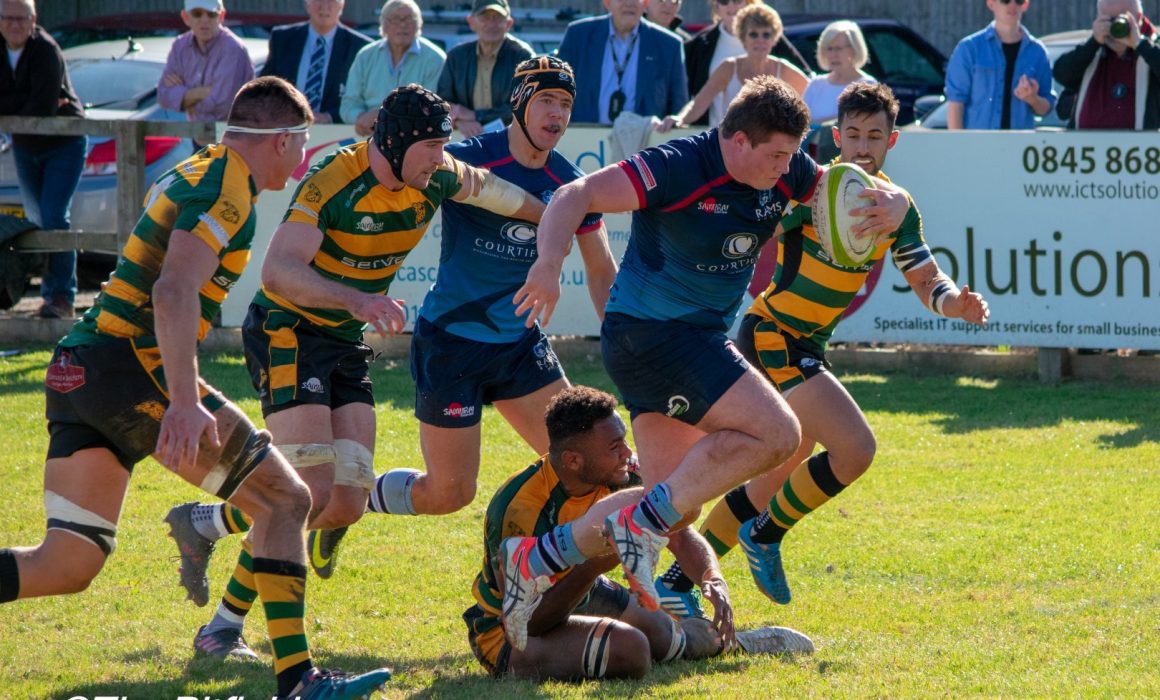 Rams RFC sealed their fifth victory of the season as they ran in four tries to beat a stubborn Barnes side.

After returning to the top of National Two South last weekend, Seb Reynolds’s men remain at the summit after a hard-fought win over newly promoted Barnes.

Barnes came into this division alongside Guernsey and the Channel Islands side had better fortunes in Round Six as they made it back to back victories after beating Clifton at Footes Lane.

Rams RFC remain on top of National Two South after a narrow victory over Barnes at Queen Elizabeth Walk.

Tries from James Baker and Jak Rossiter looked to have given the Rams a 12-5 interval lead, but Barnes levelled the scores through Johan Van Der Poel after Russell Nimmo had opened the scoring.

Barnes battled bravely to keep Rams at bay in the second half, but two penalty tries in quick succession put the visitors in the driving seat.

Frederic Avis’s try late on gave the home side hope, but the league leaders held firm to secure their fifth win of the campaign.

Brown scored his first try in a frantic opening 40 minutes which saw the Wild Geese lead 26-24 heading into the second half following tries from Josh Amadi, Brandon Barker (2) and George Owen.

Ollie Rice and Jarrard Hayler crossed in the first half for Taunton and the Somerset club began the scoring in the second period as Ben Oliphant-Thompson’s try gave the Titans the lead.

Amadi and Ratu Vakalutukali swapped scores before Gary Kingdom nudged Taunton further ahead from the tee.

Owen’s second made it a five-point game heading into the final quarter of this encounter, but Brown went over on 64 minutes to ultimately settle the contest.

Redruth edged past Birmingham and Solihull to keep on the coattails of the top two after this win in the Midlands.

Having made the 300-mile trip to Portway, the Reds went over on three occasions with the decisive score coming from Ben Fox on 68 minutes.

Before that, a try from Sam Stevens and 13 points from Aaron Simmonds had been cancelled out by a determined Birmingham and Solihull outfit.

The Bees scored tries through No.8 Umraan Jadwat (2) and winger Luke Smith, but despite Jack Jolly giving the hosts a 22-18 lead from the tee, they couldn’t hold on to their advantage as Redruth clinched the spoils.

Tonbridge Juddians ground out a hard-fought win over Bury St Edmunds to stay fourth in the National Two South standings.

Will Robinson was the man of the moment once again for TJs as he scored a converted try and a landed a penalty to clinch the victory for the Kent-based side.

His try came in the first half before the fly-half made the game safe on 79 minutes from the tee, after missing two previous penalty attempts.

The defeat for Bury St Edmunds leaves them ninth in the division.

Canterbury made it four wins on the spin after beating Worthing Raiders at the Marine Travel Ground.

It was first blood to Worthing as Matt McLean slotted over a penalty, but scores from James Stephens and Dan Smart gave the home side a 14-3 half-time lead.

The Raiders hit back after the break as Liam Perkins crashed over, but Canterbury’s win would be wrapped up on 59 minutes as Sam Sterling dotted down for the City Men who continue to march on.

Henley Hawks survived a fight back from Dings Crusaders to win an entertaining National Two South contest at Dry Leas.

Henley went in front via a Roddy Giles penalty and a David Hyde try made it 10-3 to the hosts at the break.

David Manning’s effort extended Henley’s lead before Dings hit back through Will Capon, who has recently joined on loan from Bristol Bears.

Giles added another penalty to extend the Hawks’ advantage to 12-points, but the Crusaders managed to earn a losing-bonus point thanks to Jordan Grattan’s late score.

Old Albanian returned to winning ways as an inspired performance from Tom Bednall guided them to victory over Old Redcliffians.

OAs had lost to Tonbridge Juddians in Round Five, but began October with a victory over Old Reds at Woollams.

A try from Zaki Chamnaoui plus 11 points from the boot of Tom Bednall helped a dominant home side to a commanding 16-0 lead.

Old Reds fought back as James Foss touched down before half-time, but another Bednall penalty in the second period kept OAs in control.

Foss did grab a second for the visitors, but it left them just short of a losing bonus-point as OAs saw out the victory.

After securing their first ever win in National Two South last week, Guernsey made it back to back victories as they beat Clifton at Footes Lane.

In National 2 South, @GuernseyRFC grabbed their second win of the season and climb to 11th in the table with an impressive 28-3 win over Clifton under the lights at Footes Lane pic.twitter.com/lHzDx7RfgV

Tries either side of half-time by prop Layton Batiste and fly-half Elia Morisio put the Raiders in control after an early penalty try.

Clifton did open the scoring through the boot of Brad Barnes, but they could not add to their total on the Channel Island as Chris Ahne secured the victory for Jordan Reynolds’s side who are now out of the bottom three.