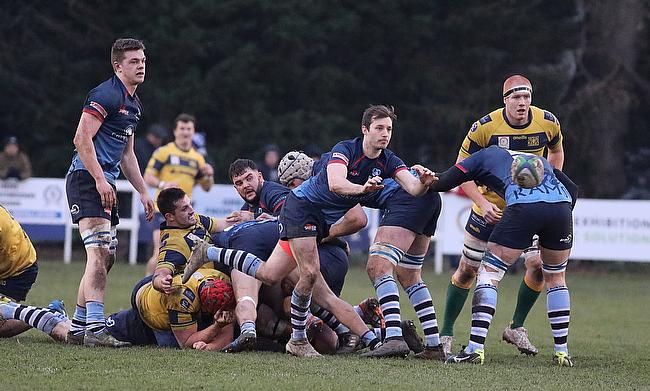 Rams RFC recorded their 13th successive victory, but were pushed all the way by Henley Hawks in a dramatic top of the table clash in National Two South.

Seb Reynolds’ side scored two tries in the final five minutes to snatch the win at Dry Leas and it means Rams are now 13 points clear at the top of the division.

Henley have dropped down to third after this defeat and Canterbury have swooped back into second spot after a convincing win over Old Redcliffians.

Fourth-placed Taunton Titans are also nicely positioned in this promotion battle as a fifth straight win against Clifton leaves them just three points behind the aforementioned Canterbury.

In terms of the relegation fight, both London Irish Wild Geese and Birmingham & Solihull began the New Year with excellent victories against Tonbridge Juddians and Dings Crusaders to enhance their survival chances while rivals Guernsey fell to the foot of the table after losing to an in-form Bury St Edmunds side.

Elsewhere in National Two South, Worthing Raiders maintained their good recent run with a victory away at Redruth while Barnes picked up a welcome win against Old Albanian.

Rams RFC extended their impressive winning run to 13 matches after a dramatic victory over Henley Hawks at Dry Leas.

Here is that try ?? just in case you missed it?? pic.twitter.com/AFT30JUgrQ

A penalty try and two scores in the final five minutes from Jak Rossiter ensured Rams maintained their remarkable form and they are now 13 points clear at the summit of National Two South.

The Hawks, who have slipped down to third following this heart-breaking defeat, did lead 12-7 on 68 minutes following tries from Dan Barnes and David Manning, but Henley saw the victory snatched away from them.

Canterbury moved back into second place in National Two South with a bonus-point win over Old Redcliffians at the Marine Travel Ground.

A second for Mackintosh followed before JJ Murray and Aiden Moss also crossed for the City Men, who returned to winning ways.

Old Redcliffians could only manage consolation tries from the in-form Henry Bird.

Taunton Titans held off an excellent Clifton fightback to secure a victory which leaves them just two points behind the play-off place.

In this 13-try thriller, Taunton went over on seven occasions with Jarrard Hayler and Nick Mason both scoring braces while Clifton’s Will Pomphrey notched a hat-trick.

Sam Brown, Oli Rice and Freddie Fraser added the other tries for the Titans, who are firmly in the race for promotion.

Taunton had led 33-7 at one stage in this pulsating contest, but Clifton replied through Chris Rovery, Henry Harper and Sam Goatley to claim two points at Station Road.

London Irish Wild Geese recovered from a slow start to pick up a superb victory over Tonbridge Juddians as they continue to battle for survival.

Wild Geese responded through a Richard Townsend try and a penalty via Liam Prescott, but the visitors held a 19-8 lead at the break as Will Robinson darted over.

Josh Amadi and Thomas Chapman exchanged scores after the restart, but the hosts then clicked into gear after half-time as tries from Prescott, Austin Hay and Oliver Turner put Wild Geese into a 32-26 lead.

The pendulum swung in Wild Geese’s favour once more when Tonbridge Juddians’ Ryan Ward was red-carded and immediately after his dismissal, George Owen scooted over for the home side.

Chapman grabbed his second score on 75 minutes to make it 41-31, but a late penalty from Prescott sealed a crucial win for the Wild Geese, who are now 10 points from safety.

Replacement Nimmo touched down for the visitors in the 79th minute and Josh Hammett kept his cool to land the conversion.

OAs led through Tobias Munday and Thomas Bednall – aided by the boot of Dan Watt – but Barnes replied through Robbie Martey and George Head.

Hammett cut OAs advantage to 20-17 with a penalty just before the hour, but Nimmo’s try handed Barnes a welcome victory.

Bury St Edmunds continued their fine form under the leadership of Nick Wakley as they defeated Guernsey at Footes Lane.

Sam Bixby’s early score was followed up by an Alex Grey try, but the home side were able to hit back.

A brace from Thomas Ceillam levelled the contest, but Will Scholes’ late first-half effort put Bury in front once again.

Jack Johnson darted over on 47 minutes to increase the Wolfpack’s lead before Finlay Sharp put the visitors in the driving seat after scoring their fifth try of the afternoon.

Elia Morisio’s try was merely a consolation for Guernsey, who are now bottom of National Two South after 11 straight defeats while Bury have won four of their last five matches.

Worthing Raiders secured their third win on the spin after beating Redruth thanks to a Curtis Barnes hat-trick.

The winger went over twice in the first half as the visitors led 15-5, with Thomas Notman scoring for Redruth.

Barnes claimed his third try shortly after half-time and a second penalty from Matt McLean kept Worthing in the ascendency.

Another try from Notman and Connor Gilbert’s effort brought the hosts right back into the contest heading into the final 10 minutes, but with the score at 25-17, McLean wrapped up the victory for Worthing with an accurate penalty from the tee.

Birmingham and Solihull picked up a potentially vital victory to begin the New Year as they beat Dings Crusaders at Portway.

Luke Smith opened the scoring for the Bees and a try from Matt Spink on the stroke of half-time gave the hosts a 17-8 lead, with Thomas Knight dotting down for Dings.

Umraan Jadwat went over to extended the home sides’ advantage after the interval.

The Crusaders hit back as Josh Trinham scored, but Jack Jolly’s second penalty of the afternoon gave the visitors too much to do and handed Birmingham and Solihull a crucial win which leaves them 11 points off safety.