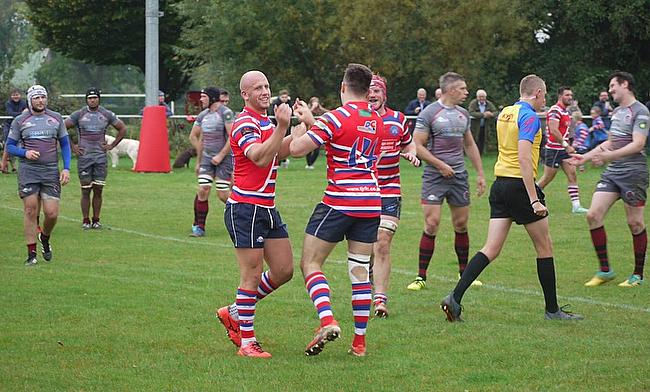 Peter Dankert’s side scored 10 tries at the Slade to clinch maximum points for the fifth game in a row whilst defeat for the Titans sees them drop out of the top two.

Henley Hawks are now up to second as they thumped Worthing Raiders whilst Clifton and Esher both picked up hard-fought wins over Sutton & Epsom and Leicester Lions, respectively.

Elsewhere, Old Albanian defeated Bournemouth, who have announced Director of Rugby Will Croker has stepped down from his role at the club, while there were also victories for Bury St Edmunds, Redruth and Old Redcliffians.

Tonbridge Juddians ran in 10 tries as they maintained their sensational start to the season by inflicting a first defeat of the campaign on Taunton Titans.

The sides came into Round Five as the top two in the division and TJs remain at the summit of National Two South after another sparkling display.

The hosts led 33-10 at half-time with Murray Galbraith-Lowe (2), Matt Walsh, Duncan Tout and Jack Nay all going over whilst Oliver Down crossed the whitewash for Taunton.

Galbraith-Lowe completed his hat-trick five minutes after the restart before both teams swapped scores.

Nay and Toby May saw their tries matched by Isaac Dalton and Barrie-John Chapman, but a fourth score for the outstanding Galbraith-Lowe highlighted TJs’ ruthlessness.

TJs’ Hugo Watson got in on the act with seven minutes remaining whilst Taunton were able to secure a try bonus-point when Dalton dotted down his second, but this was another afternoon which belonged to Peter Dankert’s side.

Henley Hawks recovered from their first defeat of the season by thrashing Worthing Raiders at Dry Leas.

Jack Robinson and Reuben Norville both scored hat-tricks for the Hawks, who ran in nine tries overall.

Ewan Fenley grabbed a brace for the hosts and Alex Burrage crossed for their final try with Ben Bolster converting every Henley score.

John Dawe claimed the only try for Worthing, who have now lost their last three matches.

Clifton bounced back from their opening loss of the campaign as they defeated a spirited Sutton & Epsom in Bristol.

Ben Holt did pull one back for the away side, but Luke Stratford and Alex Mount exchanged scores as the hosts led 28-14.

Oliver Killgallon’s try was the perfect start to the second-half for S & E but another score from Harper kept the Lavender and Blacks in control.

The visitors were able to dot down on two more occasions as Daley Aremu and Kyren Ghumra went over either side of a Clifton penalty from Brad Barnes.

Sutton and Epsom trailed by seven with nine minutes remaining, but Clifton held out for the win while the Black and Whites settled for two points.

Esher got the better of Leicester Lions as Peter Winterbottom’s side clinched a hard-fought victory at Molesey Road.

Both of Leicester Lions’ tries came in the second half as Max Johnson and James Whitcombe crossed, but they were unable to stretch their unbeaten to four games.

Old Albanian returned to winning ways in style as they sealed a bonus-point win over Bournemouth at Woollams.

Before the game, Bournemouth Director of Rugby Will Croker announced he was stepping down from his role at the club and didn’t take charge of this fixture.

Josh Hallett crossed early on for OAs before Joe Butler’s penalty and a score from Oliver Stonham helped establish a 15-7 lead at the break.

However, OAs finished with a flurry as Nico Defeo and Dan Watt raced over to wrap up the victory.

Bury St Edmunds picked up a third win from their last four games, but they were pushed close by Barnes.

Alex Hind’s early try gave Barnes the lead, but Bury went in front thanks to Ben Cooper’s try which was converted by Alfie Garside.

Matt Bursey’s effort on 63 minutes extended the Wolfpack’s advantage, but Barnes set up a tense finish when Taino Goveia darted over. However, they couldn’t add to their total and Bury held on in the capital.

Honey slotted 11 points throughout the afternoon, but it was his opposite number who helped Dings hold a slender half-time lead.

Dean Bonds’ score gave the hosts a seven-point lead, but that was wiped out with 11 minutes to go as the experienced Luke Arscott made it all square.

However, there was to be a late twist in Cornwall as Honey held his nerve to ping over a long-range penalty and seal a dramatic win for Redruth.

Old Redcliffians clinched their second victory in a row, but they had to work hard to defeat Westcliff at The Gables.

No.8 Sam Reynolds opened the scoring for the home side, but Matt Baker and Kieran Ward dotted down to give Old Reds the lead.

Both teams swapped penalties, but Westcliff were able to level things up before the break as Chris Marsh went over.

A second penalty from Jack Jones gave the hosts the lead, but the away side would ultimately have the final say as Dominic Sprague’s try and a penalty from Ashley Groves proved to be enough for the victory.