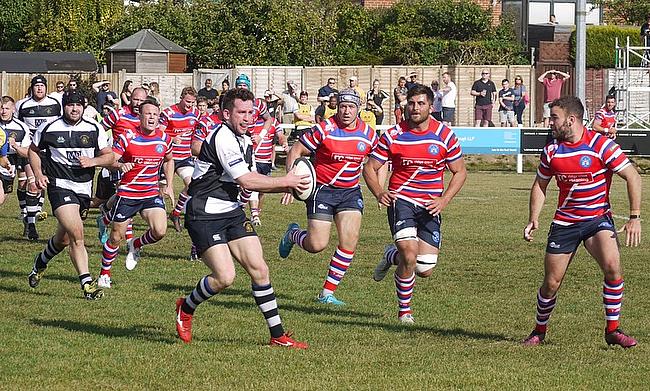 Taunton Titans against Henley Hawks was billed as the game of the weekend in National Two South and it certainly didn’t disappoint. (Photo Credit: Tonbridge Juddians)

In the end, the Somerset club earnt the victory which continues their 100 per cent start to the campaign and they are now up to second place in the division behind Tonbridge Juddians.

Whilst Taunton and Tonbridge Juddians were clinching their fourth successive wins, Sutton & Epsom secured their first triumph of the season despite having a player sent off against Westcliff.

Old Redcliffians also got their season up and running in Round Four as they beat Old Albanian at Scotland Lane.

Tonbridge Juddians moved to the top of National Two South thanks to a seven-try bonus-point victory over Bournemouth.

Grant Hancox landed an early penalty for the hosts, but Hugo Watson’s try on 26 minutes gave TJs a slender 7-3 lead at the break.

Oct/Nov massive ….. oh and right through to April 🙂 pic.twitter.com/BUdqGj5kZH

However, the visitors were sensational after the interval as Charles Edwards, Will Robinson, Max Hayes, Murray Galbraith-Lowe and Matt Walsh all went over to make it 42-3.

Ben Russell did respond for the Lions, but Tom Chapman’s try in the final minutes of this contest wrapped up another convincing win for TJs.

Both sides came into this fixture with 100 per cent records to their name and the Titans led 15-0 at the break after Isaac Dalton and Cory Teague tries as well as a penalty from Gary Kingdom.

However Henley, who began the day as league leaders, fought back in impressive style as Tom Emery, Sam Lunnon and Reuben Norville all crossed to give the visitors a two-point lead.

But the pendulum swung back in the favour of Taunton as Dalton’s second and a penalty from Kingdom secured an excellent win for Tony Yapp’s side.

However, the Lions roared back to cut the deficit to two points thanks to efforts from Devon Constant and Sam Benjamin.

The hosts then controlled the second-half and took the game away from Clifton as Max Johnson (2), Constant and Ed Sumpter all crossed.

Clifton could only manage a Brad Barnes penalty after the interval as the Lavender and Blacks’ winning run came to a halt in the Midlands.

Bury St Edmunds produced a strong first half performance to secure an excellent victory over Esher in Suffolk.

Final whistle and @BSERugby were too strong for us. Final score BSE 24 – 14 Esher. We fought back hard in the second half but the better side won. Congratulations Bury and all the best for the rest of the season.

Esher’s Devlin Hope exchanged scores with Bury’s Chris Lord after the interval and despite Matt Lowes’ try on 71 minutes for the visitors, Bury had done enough in the opening period to clinch their second win of the campaign.

Redruth showed resilience to pick up just their second away win of 2019 as they defeated Worthing Raiders at Roundstone Lane.

However, the hosts clicked into gear and responded when Matt McLean and Will Grief both scored to bring Worthing right back into the contest.

Redruth’s Todd Prisk swapped tries with Harry Forrest, but the visitors were able to confirm their victory and the bonus-point when Matt Shepherd touched down.

Old Redcliffians ended September by clinching their first win of the season as they defeated Old Albanian.

Matt Baker’s first-half try helped Old Reds reduce OAs’ lead to 8-5 at the break after the visitors had taken an early lead thanks to a try from Alessandro Ricci and a penalty via Roddy Giles.

However, the home side controlled the scoreboard in the second period as Dan Fry went over before three Ashley Groves penalties secured a confidence-boosting win for Alex Davies’ side.

Dings Crusaders secured their first victory since the opening day of the season as they beat Barnes at Shaftesbury Park.

Dings took a 10-point lead thanks to a converted try and penalty from scrum-half Steven Plummer.

Josh Hammett struck over a penalty for Barnes after the break but tries from Liam Appleton, Gavin Curry and Thomas Hargan put the Crusaders in the ascendency.

Barnes’ Taino Goveia and Sam Gratton went over either side of Appleton’s second try, but that was as good as it got for the visitors as Dings clinched an excellent win.

A penalty try and a score from Kyren Ghumra put the hosts 14-10 up at half-time, but during the first period, George London was sent-off for a tip tackle.

Chris Marsh had opened the scoring for Westcliff and his side, with the extra man advantage, went in front through James Smith’s try on 45 minutes.

However, the visitors were to be denied their opening victory of the campaign as Smart barged over in the dying embers of the contest and his try was coolly converted by James Bourton to secure a victory full of character for S & E.