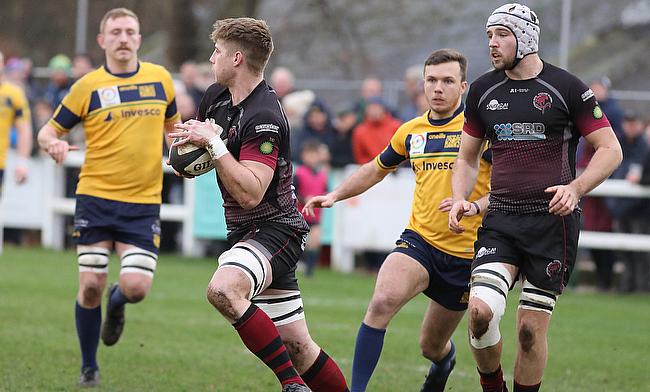 Tony Yapp’s side are now seven points off second-placed Henley following their defeat at Dry Leas, but the Titans can bounce back this coming Saturday if they can secure a positive result against table topping Tonbridge Juddians.

TJs are one point clear of Henley after their victory over bottom of the table Bournemouth and sticking with the wrong end of the division, Westcliff picked up a crucial win against Sutton & Epsom to move six points clear of the drop.

Tonbridge Juddians comfortably beat Bournemouth in National Two South to remain at the top of the division.

Rory McHugh, Tom Chapman, Ryan Jackson, James Green and Hugo Watson all crossed for the league leaders who are one point clear of second-placed Henley Hawks.

A score from Mike Pope on the hour prevented a shut-out for Bournemouth, but they were unable to add to their total in the final quarter.

Henley Hawks held off a rousing Taunton Titans comeback as they defeated their promotion rivals in a thrilling contest at Dry Leas.

Both sides knew the importance of this fixture beforehand and the Hawks were able to clinch the victory whilst Taunton are now seven points off second-place following this loss.

Tries from David Hyde, George Griffiths and George Wood gave the hosts a 19-10 lead, whilst Gary Kingdom landed three points for the Titans and the visitors were also awarded a penalty try.

However, Henley hammered home their advantage in quick-fire time as Samir Kharbouch and Ewan Fenley dotted down in a six-minute window.

This seemed to spark Taunton back into life as they scored 17 unanswered points to claim two deserved bonus-points.

Jack Arnott and Sonny Haines (2) both scored, but with only one of the tries converted, it meant the Titans missed the chance to steal a share of the spoils.

Redruth stretched their winning run to six matches as they ran in four tries to defeat Worthing Raiders at the Recreation Ground.

The Reds are 12 points off second-placed Henley Hawks, but Nigel Hambly’s men are continuing to churn out victories.

The home side led 15-0 at half-time with Dean Bonds and Jess Tompsett crossing for tries whilst Fraser Honey kicked five points.

The fly-half was unable to convert Matt Shepherd’s brace after the interval and with the bonus-point in the bag just after the hour, Redruth continually shutdown Worthing to complete a perfect afternoon.

Tries from Ed Sumpter, Drew Rudkin and Ben Young helped the Lions to a 24-6 half-time lead and Sumpter added his second after the break as the visitors took control.

Centre Greg White and hooker Rob Gardner scored a try apiece inside the opening 12 minutes, but Andy Hamilton touched down just before half-time to make it 14-7.

Three wins in a row for @BSERugby with away win over @esherrugby on Saturday: https://t.co/MhkTf5PNwG

Esher then hit back again as Matt Lowes forced his way over, but the stalemate lasted for five minutes as Kodie Drury-Hawkins converted his own score.

The contest then swung back and forth with neither side able to turn pressure into points, with Esher failing to execute their set-piece in threatening positions.

Old Albanian were made to work hard in challenging weather conditions but they were able to overcome Old Redcliffians at Woollams.

OAs, who began the New Year by beating Sutton & Epsom, struggled to find any rhythm in the first half and trailed 3-0 at half-time following an Ashley Groves penalty.

In truth, the strong winds were affecting both sides but OAs used it to their advantage in the second period to take the game away from their visitors.

Ethan Benson, Tom Webb, Ashley Illston, Nick Defeo and Harry Samuel all crossed whilst the only negative for the hosts was a leg injury to second-row Tim Bond.

As for Old Reds, this defeat leaves them six points from safety, with a game in hand.

Barnes were able to prevail against Dings Crusaders to move 12 points clear of the bottom three in National Two South.

A Jamie Collins score and a penalty try helped Barnes into a 14-5 half-time lead, with Jordan Grattan going over in the corner for Dings.

After suffering two yellow cards in the first period, the visitors were shown a third when Sam Graham was sin-binned and it allowed Barnes’ Josh Hammett to land a penalty before the hosts extended their advantage when Kieron Sasson went over.

Grattan did grab a second score for the Crusaders, but Barnes were able to see out the rest of the contest to clinch a potentially crucial win.

Two tries in the final six minutes helped Westcliff secure a vital victory in the battle for survival against Sutton & Epsom.

James Smith’s first-half try had given the hosts the perfect start, but they struggled to build on that foundation as S&E worked their way back into the contest.

A penalty shortly after the break from Jacob Knight got them on the board and as the clock ticked into the final 10 minutes, replacement Michael Mbaud crossed to give the away side the lead.

Sutton & Epsom beat Westcliff earlier in the campaign, but a repeat of that result went out of the window as the impressive Myles Bean and Chris Bolton both touched down to snatch a major win for the home side.