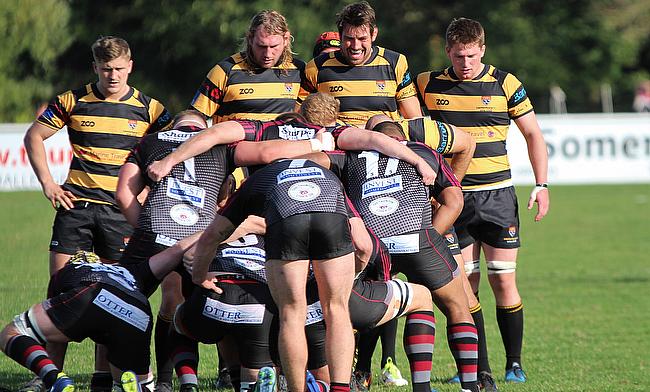 Taunton Titans are up to second in National Two South after defeating Birmingham and Solihull at the Commsplus Stadium.

Tony Yapp’s side have now won their last six games and it means they are one point clear of their rivals after both Canterbury and Henley Hawks suffered defeats in Round 18.

The City Men lost to Dings Crusaders after a dramatic conclusion in Bristol while the Hawks were beaten by Tonbridge Juddians.

Second place is the realistic target for the aforementioned promotion candidates as league leaders Rams RFC extended their advantage at the top to 15 points after claiming a 14th successive win against Old Albanian.

The Rams continue to move closer towards the title while at the other end of the division, Old Reds took a big step away from danger after a crucial victory over relegation rivals London Irish Wild Geese.

All three sides in the drop zone lost on the weekend while elsewhere, Clifton picked up a superb victory at Worthing Raiders, Redruth made a winning start under Nigel Hambly and Barnes rescued a draw against Bury St Edmunds.

Rams RFC continued their pursuit of the National Two South title as they secured their 14th consecutive victory following a bonus-point win over Old Albanian.

Ross Crame, Greg Illingworth, Tom Vooght and Louis Wolf all crossed in a superb first-half for the league leaders.

Ben Henderson and Jamie Guttridge also scored as Rams continued their remarkable run of victories and Seb Reynolds’ side are now 15 points clear at the summit.

Old Albanian, who are the only side to have beaten Rams this season, scored through Alex Chalcraft, Alessandro Ricci and Charlie Hughes.

Taunton Titans have moved up to second place in the National Two South standings as they extending their winning streak to six matches after beating Birmingham and Solihull.

Ollie Rice scored twice for the Titans in the first period, while Sam Brown and Charlie Williams also went over to give the hosts a 22-5 lead.

Luke Smith scored for the away side in the opening 40 and it was first blood to the Bees after the interval as Matt Dight and Matt Spink both crossed.

With the score at 22-17, Birmingham and Solihull had pulled themselves back into this contest, but Aron Strumimski’s late try denied the Midlands club a losing point and sent Taunton into the top two.

Crusaders centre Marcus Brooker scored a brace in the first period, but his side trailed 13-10 at the break after two penalties from Oli Best and a score via Fredrick Edwards.

Joseph Hawkesby’s try and a penalty from Steven Plummer put Dings in front, but JJ Murray’s effort on 73 minutes levelled the game up.

However, the hosts would have the final say as Plummer kept his cool to slot over a superb penalty and clinch a welcome win for Luke Arscott’s side.

Tonbridge Juddians bounced back from their defeat against London Irish Wild Geese to beat promotion candidates Henley Hawks at the Slade.

Defeat for the Hawks leaves them four points off second-placed Taunton while TJs are only eight points behind the Titans.

Matas Jurevicius and Murray Galbraith-Lowe scored the tries for the hosts, with Will Robinson kicking two conversions and three penalties.

Henley replied through tries by George Wood and Daniel Barnes.

For the second week in a row, Barnes left it late to avoid defeat as Matt Steele’s converted score helped the hosts claim a draw against Bury St Edmunds.

Trailing 24-10, the home side battled back in the final 10 minutes to snatch a share of the spoils following tries from David Butler and Steele.

24-24. Two late trys salvage a draw for Barnes and bring Burys winning streak to an end.https://t.co/dxbYE4WfRc

After leading 12-10 at the break thanks to scores from Callum Torpey and Jacob Bodkin, Bury stretched their advantage further when Finlay Sharp and Will Scholes went over.

But after an earlier try by Tom McArthur and a penalty via Josh Hammett, Barnes were able to recover to rescue a draw in the capital.

The two sides shared six tries in the first period as Clifton narrowly led 21-19 thanks to scores from Sam Goatley (2) and Will Pomphrey, while George Hammond, Harry Barlow and Matt McLean crossed for Worthing.

Jack Spencer and Goatley added two more tries either side of a McLean penalty, but Hammond’s second cut the Bristol outfit’s lead to six points.

However, Clifton wrapped up the win in the final five minutes as Henry Harper touched down before the sensational Goatley capped off a brilliant performance by claiming his fourth try of the afternoon.

Nigel Hambly’s reign as Director of Rugby at Redruth got off to a winning start as his side defeated Guernsey at the Rec.

Rob Coote scored a try and Richard Kevern kicked two penalties to give Redruth an 11-0 lead at half-time.

Coote grabbed his second on the hour mark and the Reds added a third try to their tally when Jack Simmons crossed.

Guernsey could only manage a late Anthony Armstrong try, but this was the perfect start for Hambly and a much-needed victory for Redruth.

Old Redcliffians boosted their bid to avoid the drop in National Two South with a vital victory over rivals London Irish Wild Geese.

The hosts led 25-7 at the break with James Clements (2) and Christian Gervais crossing for Old Reds, while Brandon Baker dotted down for the away side.

Always nice to be back at Scotland lane… Fantastic first half and superb finish to the game by the boys to win and bag the 5 points! UTR

Tries from Sean Cunningham and Ryan Bifield saw Wild Geese bring themselves right back into the contest as they made it 25-22, but Old Reds kept their cool to seal victory.

National Two South’s leading try scorer Henry Bird claimed two scores in the final quarter to seal a crucial win for the home side, who are now 15 points clear of the relegation places.