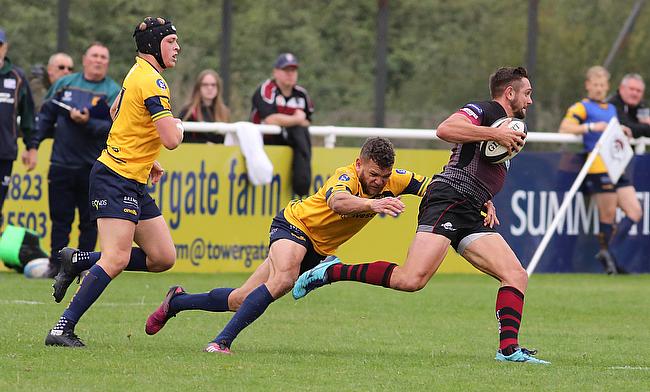 All eyes would have been on Taunton last weekend when they faced Henley Hawks in National Two South and the Titans are once again under the microscope in Round Five. Photo Credit: (Steve Karpa)

Tony Yapp’s side defeated Henley Hawks to maintain their excellent start to the season and they have the chance to go to the summit of National Two South when they visit Tonbridge Juddians on Saturday.

An impressive TJs side have picked up maximum points so far this season and they have only lost one of their last 26 matches so expect a titanic tussle at the Slade.

Henley Hawks will be hoping to gain some ground on the top two when they host Worthing Raiders this weekend whilst Leicester Lions take on Esher, with the Midlands club keen to continue their encouraging start to life in this division.

Fifth-placed Clifton will be targeting a return to winning ways when they entertain a Sutton & Epsom side who opened their account last Saturday while elsewhere, Bury St Edmunds visit Barnes, Old Albanian face Bournemouth, Dings Crusaders go to Redruth and Old Redcliffians travel to Westcliff.

After one top of the table battle last week, another mouth-watering clash heads up National Two South in Round Five as league leaders Tonbridge Juddians host second-placed Taunton Titans. TJs just seem to be continuously improving and four bonus-point wins on the trot suggests Peter Dankert’s side are aiming for a top two spot this year.

One more sleep until the Clash if the Titans at The Slade. Here’s the TJ squad rating to go at 3pm on Saturday against the mighty and also undefeated Titans – come and feel the noise! #COUTJs pic.twitter.com/FW1vHI13Rc

Taunton Titans’ first major test of the season came against Henley Hawks in Round Four and Tony Yapp’s side came through their examination with another victory after a thrilling contest in Somerset. The Titans will be aware that if they can secure another victory at the Slade to make it five wins on the spin, it will be a significant result in their own promotion bid this season.

Henley Hawks won’t need a pick-me-up after their 25-17 loss to Taunton Titans last week, but they will be keen to put that defeat to bed as quickly as possible. Nigel Dudding’s side are now four points behind the top two, but with Tonbridge Juddians and Taunton Titans in action on Saturday, a victory against Worthing Raiders could see them move into second position.

However, the visitors will have something to say about that. Worthing only lost 31-22 in this corresponding fixture last season and they will be quite keen to bounce back after a disappointing home loss to Redruth last time out. It was the first time the Raiders have failed to pick up points this term so at Dry Leas, they will be hoping to respond.

Esher’s clash with Leicester Lions this weekend has shaped up to be a very intriguing one with both clubs experiencing a purple patch of form as October begins. For Leicester Lions, they opened their debut National Two South campaign with a defeat against Tonbridge Juddians, but their fortunes have improved significantly since then.

Gareth Collins’ side have collected a trio of wins whilst it is two victories from their last three matches for Esher. Peter Winterbottom’s side have beaten Barnes and Dings Crusaders, but they did suffer a loss against Bury St Edmunds last time out. The Lions currently sit in fourth place whilst the hosts occupy sixth spot in National Two South so who will come out on top at Molesey Road?

Clifton’s meeting with Sutton & Epsom on Saturday comes after both sides experienced contrasting results to conclude September. The hosts saw their winning start to the season ended by Leicester Lions as Matt Salter’s side were punished by errors in the second-half after a blistering opening 40 minutes.

They will be determined to bounce back at Station Road, but Sutton & Epsom arrive in Bristol after securing their opening National Two South victory. Despite having a man sent off, the Black and Whites defied the odds to defeat old foes Westcliff to kick-start their season. Jeff Parsons’ side will now be keen to build on that win, but they will know the task that awaits them in the West Country.

Bury St Edmunds’ excellent win over Esher in Round Four was their second home victory of the season. The Wolfpack’s next target will now be a triumph on their travels and the Suffolk outfit will be hoping that occurs when they visit Barnes.

The hosts on Saturday currently sit in 12th place and they were unable to build upon their brilliant victory against Redruth in Round Three when they faced Dings Crusaders last weekend. Joe Gray’s side were beaten 34-15 at Shaftesbury Park so now the London-based club will be hoping for a response back on their own turf.

After securing a second home win on the spin against Sutton & Epsom, defeat at Old Redclffians in Round Four would have been disappointing for Old Albanian. OA  were second best at Scotland Lane last time out and their inconsistency will be something James Osborn and James Buckland will want to put right as soon as possible.

They do have a chance to make it a hat-trick of wins at Woollams when they face Bournemouth this weekend and following fixtures against the top three sides, the Lions may see this as an opportunity to claim they first victory since promotion from South West Premier. Will Croker’s side are the only team in the division without a point to their name so they will be keen to get off the mark in Hertfordshire.

Redruth would have taken any kind of victory last weekend after a frustrating display in Round Three against Barnes, but Nigel Hambly’s side produced a very polished performance to see off Worthing Raiders and return to winning ways.

The Reds will now be gunning for their second home triumph of the campaign, but Dings Crusaders arrive in Cornwall in better spirits. The Bristol-based club responded from back-to-back losses with a solid victory over Barnes and now they will be aiming for successive victories for the first time since December 2018.

Old Redcliffians will be very keen to approach this match in the same manner they did against Old Albanian last time out. Alex Davies’ side were able to secure their first win of the season at Scotland Lane in Round Four and now Old Reds have an opportunity to double their tally when they visit Westcliff.

The hosts will be wondering how they left Sutton & Epsom without their first ever National Two South victory last weekend. S & E were able snatch the win at Rugby Lane with 14-men so that defeat for Westcliff would have stung. Nevertheless, Rick Compton and Jacob Ford’s side are back on home turf this Saturday and at The Gables is where Westcliff have picked up three of their four points this term. Can they now clinch their first victory since promotion from London & SE Premier?