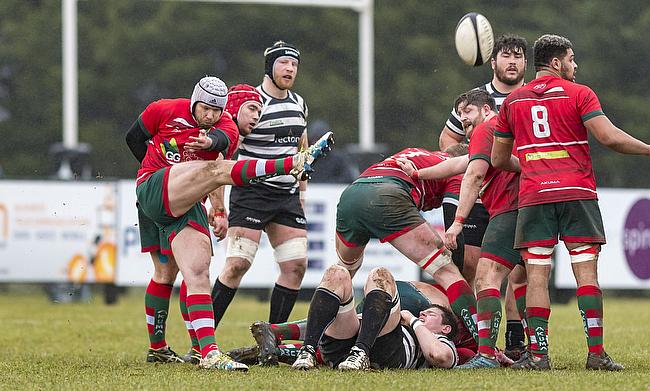 With five games to go in the National Two South season, Broadstreet’s stay at this level is slowly coming to a conclusion and their fate could be sealed this Saturday.

It has been a very tough week for the bottom club in this division. Following a defeat to Tonbridge Juddians last weekend, Street parted ways with head coach Paul Hurst with the side sitting 17 points from safety.

Cliffie Hodgson will step into the hot seat for the remaining games this season, but after promotion from National Three last term, an immediate return to that level seems inevitable. Broadstreet take on Old Redcliffians this weekend and if results go against them, then their relegation could be confirmed.

The Old Reds have their own battle for survival to think about as do the likes of Wimbledon, Barnstaple, Clifton and London Irish Wild Geese. Vital victories for Clifton and the Wild Geese last week eased their fears of relegation, but all five teams know that they cannot afford to rest on their laurels.

Away from the bottom of this division, second placed Chinnor host Redruth this weekend and the fight for third place will take a new twist when Redingensians entertain Taunton Titans while Henley Hawks welcome Canterbury to Dry Leas.

Cinderford took another step towards the National Two South title and automatic promotion to National One in some style last weekend. Paul Morris’ men brushed aside Old Redcliffians to secure their 19th successive victory as they remain nine points clear at the summit. The Foresters now require a minimum of two points from their home fixture with Wimbledon to secure a top two place for this season and on paper, you would expect the Gloucestershire outfit to achieve that aim this weekend.

The men from Dockham Road have been unstoppable this term, but they were given a scare by Barnstaple two weeks ago so relegation threatened Wimbledon will aiming to put in a similar display as they look to upset the odds. The Dons had the week off last Saturday due to a round of rearranged fixtures and they wouldn’t have been pleased to see some of their relegation rivals pick up vital wins. So as things stand, the men from Barham Road are now 12 points from safety with five games to go and with this being their final match in a run of fixtures which has seen them play the top three sides in the division, the Dons will be aiming to gain a positive result before a heading into a crucial April.

Wimbledon did actually run second placed Chinnor very close two weeks ago, but Matt Williams’ side took their performance to a different level last Saturday as they blasted past Barnstaple to secure their fifth win on the spin. Williams was pleased with the dominance the Black and Whites displayed as they edged closer to securing a top two finish in this division. Chinnor are 19 points clear of third placed Redingensians and back to back bonus-points from their next two games could guarantee them a play-off spot.

Count down to our next 1st XV pic.twitter.com/fgtxylFLL2

But, their charge towards second place will be tested this Saturday when Redruth visit Kingsey Road. There was some sad news to come out of the Recreation Ground this week as former Reds player and University of Bath student James Huxtable sadly passed away. There is no doubt that the current crop of players at Redruth will be aiming to put in a performance in memory of James and they travel to Oxfordshire in decent form. Pale Nonu’s side have won four of their last five games, but they did fall to a surprising defeat against London Irish Wild Geese last weekend. Can the fifth placed side respond in Round 26?

The battle for third place could be decided when Redingensians host Taunton Titans this weekend. The Rams currently occupy the bronze medal position and they are one point clear of the Titans with five matches to go in the campaign. Redingensians weren’t in action last weekend so they come into this crucial fixture on the back of a defeat against Redruth which Head Coach Seb Reynolds put down to ill-discipline.

The men from Old Bath Road cannot afford to gift their opposition chances this Saturday as Taunton arrive in Berkshire with the sole aim of moving into the top three. Like the Rams, Tony Yapp’s side were not in action last weekend as their fixture with Henley Hawks was postponed for a second time due to snow, but the ball is in their court as they have a game in hand over Redingensians. Taunton have won eight of their last nine games following a blip just before Christmas and another victory to add to that impressive tally would leave them in the driving seat for third spot.

As we have mentioned above, Henley Hawks’ fixture against Taunton Titians was postponed last weekend due to the ‘Mini Beast from the East’ and the game has been rearranged for Easter Saturday. But before that, the Hawks are set to play their first match at Dry Leas for a month when they host Canterbury this weekend. Pete Davies’ side will also be wearing pink this Saturday in aid of Cancer Research UK and Henley will be in high spirits in their new attire as they aim to build upon their 27-18 victory in their last outing against Bury St Edmunds as they look to cement a sixth place finish.

As for Canterbury, their season is in danger of fizzling out. The City Men were condemned to their fifth defeat in a row last weekend by Worthing Raiders which has seen Andy Pratt’s side fall to 10th in the table. Canterbury have won just one of their last seven matches and they have not secured a victory away from home since the beginning of December. With them struggling for form, an overdue triumph on the road would be most welcome for the Kent outfit.

Tonbridge Juddians host an old foe in Barnstaple this weekend with both sides going through contrasting fortunes. Since TJs’ promotion last April, they have been enjoying life at this level and they currently sit seventh in the standings having lost just three of their last 11 matches.

The men from the Slade come into this fixture on the back of a hard-fought win over Broadstreet whilst Barnstaple suffered a tough Saturday last week. A heavy loss to Chinnor was compounded by the fact that rivals London Irish Wild Geese and Clifton both secured wins which means Steve Perry’s side have dropped to 13th in the table to leave them eight points clear of the drop. Perry said after the Chinnor game that he was still “pleased by the character of his players” and they will need to show the same spirit this weekend as Barum aim to arrest a run of four straight defeats.

Jon Curry will be hoping his first win as Bury St Edmunds’ head coach will occur at Hazelwood this weekend when his side take on London Irish Wild Geese. More forward planning at the Haberden took place last week as Sam Bixby, Yasin Browne and Scott Brown all signed new contracts with the club, but the Wolfpack will want to end this current campaign on a high after a run of one win from their last five matches.

Bury have dropped down to eighth in recent weeks after a dip in form, but their hosts will be hoping their fortunes are about to change at just the right time in the season. London Irish Wild Geese secured a potentially vital win over Redruth last weekend which lifted them to 11th in the table and 11 points clear of the relegation places. Lee Starling’s men were able to beat the drop last term and with five games to go in this current campaign, a third home win on the bounce would keep them on course to achieving that feat once again.

Worthing Raiders head coach Jody Levett has urged his side to end the season on the front foot. The men from Roundstone Lane suffered a defeat against Broadstreet in Round 25, but responded with an excellent result against Canterbury last weekend. The Raiders are now ninth in the table and a top six finish is not out of the question so they will be focused on giving it their all in their final five fixtures, beginning with this weekend against Clifton.

Clifton will arrive in Sussex in a buoyant mood. After slowly edging towards the relegation places following a run of one win in 10 matches, four victories in their last eight games has seen a turnaround in the Lavender and Blacks’ fortunes. Back to back triumphs over Canterbury and Bury St Edmunds have moved Darren Lloyd’s side nine points clear of the bottom three with five matches remaining. The men from Station Road will be hoping they can keep their survival mission on track by gaining a positive result at Worthing this Saturday.

Following their 22-14 defeat to Tonbridge Juddians last weekend, Broadstreet parted ways with head coach Paul Hurst with immediate effect. Hurst was set to leave the Midlands club at the end of the season, but his time at the Ivor Preece Fields has been cut short after three years at the helm. His replacement is backs coach Cliffie Hodgson who will take over a side which currently sits 17 points adrift of safety with five games remaining in the season.

Broadstreet RFC can confirm that Head Coach Paul Hurst will be leaving his position at the club with immediate effect.

Having taken the reins at the Ivor Preece Field in 2015, Paul was previously the Forwards… https://t.co/jkk3mLOGOq

In truth, Street could be relegated this weekend if results don’t go their way, but sympathy will not be on the minds of Old Redcliffians who have more of a chance of staying in this division. As things stand, Saul Nelson’s side are eight points off safety and their defeat to Cinderford, coupled together with wins for Clifton and London Irish Wild Geese, has made Old Reds’ job slightly more difficult. After a tough run of tough fixtures, the men from Scotland Lane have a wonderful chance to get their survival bid back on the right path by heaping more misery on Broadstreet.