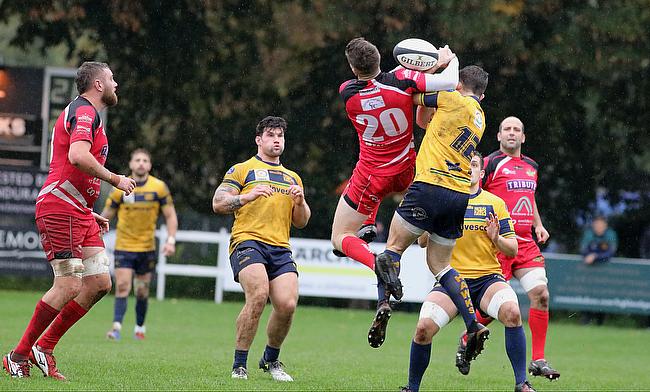 There was yet another change at the summit of National Two South as Tonbridge Juddians moved into pole position. Photo Credit: (Steve Karpa)

Peter Dankert’s side returned to winning ways against Worthing Raiders and their victory tasted even sweeter after title rivals Henley Hawks were beaten by Redruth away from home.

TJs now hold a one-point lead at the top whilst Taunton Titans still remain in the promotion conversation after a narrow victory over Old Albanian in Round 20.

At the wrong end of the division, Westcliff and Bournemouth played out a dramatic draw at The Gables whilst all of the teams around them in the table suffered defeats.

Elsewhere, there were away victories for Leicester Lions and Bury St Edmunds.

Tonbridge Juddians thrashed Worthing Raiders as the latest twist in the title race saw Peter Dankert’s side return to the summit of National Two South.

Hugo Watson’s early score, a penalty from Will Robinson and a try from Rob White put TJs 15-0 up at half-time.

Henry Birch crossed for Worthing, but Rory McHugh and Watson then touched down to keep the hosts in command.

Henley Hawks have been knocked off the top of National Two South as Redruth continued their outstanding form with a victory at the Recreation Ground.

Tries from Dean Bonds, Tommy Phillips and Jack Simmons helped the hosts to a 22-13 half-time lead, with Ewan Fenley and Tom Emery crossing for Henley.

Reuben Norville’s converted try brought the Hawks to within two points just before the hour, but the Reds dominated the scoreboard in the final quarter.

Two Fraser Honey penalties and a Richard Brown try ensured an 11th win from their last 12 games for Redruth whilst Henley are now one point behind leaders Tonbridge Juddians, ahead of their mouth-watering clash on February 1st.

Taunton Titans are still firmly in the race for a top two finish after a tense and narrow victory over Old Albanian.

After beating Tonbridge Juddians last weekend, the Titans got off to a flying start as flanker Ratu Vakalutukali dotted down.

Gary Kingdom’s kicking edged Taunton further ahead and Oscar Kolowski’s try made it 15-0 after 14 minutes.

However, OAs’ hit back to level the scores at half-time as Alessandro Ricci and Oliver Stonham both crossed either side of a Morgan Thompson penalty.

Three points from the boot of Kingdom nudged Taunton in front and with 10 minutes to go, Vakalutukali’s second gave the visitors an eight point cushion.

The home side did respond as Thompson converted his own try, but it was too little too late as the Titans held on for the victory.

Clifton claimed yet another derby victory as they handed Old Redcliffians their eighth successive defeat in National Two South.

Finlay Sharp and Luke Stratford both scored inside the first 15 minutes as the hosts took a 12-0 lead.

An Ethan Doyle try and two penalties from Dom Sprague cut Clifton’s advantage to just one point, but the home side cut loose from this point on.

Brad Barnes landed a penalty before Jack Williams (2), Tom Stanton and Charles Bullimore all went over to seal back-to-back wins for Clifton as they heaped more misery on Old Reds.

Leicester Lions produced a dominant display as they beat Barnes to return to winning ways in National Two South.

Two penalties from the boot of Ben Young and a converted try by James Stubbs helped the Lions to a 13-9 half-time lead, with Basil Strang kicking nine points for the hosts.

Young nudged over another penalty following the restart and two tries in the final 10 minutes from Devon Constant, who capitalised on a Barnes yellow-card, sealed the victory for Gareth Collins’ side.

Bury St Edmunds claimed their third successive away win as they defeated Dings Crusaders, who had Joe Hawkesy sent off.

The visitors led at the break after tries from Ciaran Leeson, Alex Grey, Tomas Milosevic and George Grigg-Pettitt, whilst Tom Hargan crossed for Dings.

The winger doubled his and the Crusaders’ tally early in the second-half, but a Kodie Drury-Hawkins penalty kept the Wolfpack in control.

Josh Lloyd and Bury’s Will Affleck swapped tries before Hawkesby was shown a red-card on 75 minutes, but even with 14-men, Dings did salvage a try bonus-point as Lloyd dotted down late on.

Sutton & Epsom are now 15 points off safety in National Two South after losing to Esher at Molesey Road.

A converted try by scrum-half Jack Walsh gave the hosts a flying start but Oliver Kilgallon’s score was the perfect response by S&E.

Callum Monks and George London swapped tries, but on the stroke of half-time, Esher’s Tristan Roberts landed his second penalty of the afternoon to make it 20-12.

Tom James’ try stretched Esher’s lead after the interval, but S&E continued to battle and their hopes of a positive result in Surrey were still alive following Matt Whitaker’s try on the hour.

However, a second for James and James Booth’s effort wrapped up the victory for Esher as S&E’s survival bid suffered another blow.

Westcliff’s Jake Spivey scored a late try to salvage a dramatic draw against Bournemouth at The Gables.

Tries from Greg Bannister and Joe Ford put Westcliff 10-0 up at half-time before Myles Bean’s effort on 53 minutes increased their advantage.

However, Bournemouth came alive in the final quarter to flip this game on its head as tries from Mike Pope and Alan Manning brought them back into the contest.

Westcliff pay the price for four missed conversions but a controversial ending. Continual Westcliff pressure led to a succession of penalties and two yellow cards but crucially and questionably no penalty try.

Two quick-fire penalties from Grant Hancox, remarkably, gave Bournemouth the lead but a vital victory in their fight against relegation was to be snatched away from them as Spivey took advantage of two yellow cards to save a draw for Westcliff.

The hosts even had the chance to clinch a victory, but the resulting conversion was off target whilst some home supporters were questioning why they weren’t awarded a penalty try following Bournemouth’s ill-discipline.