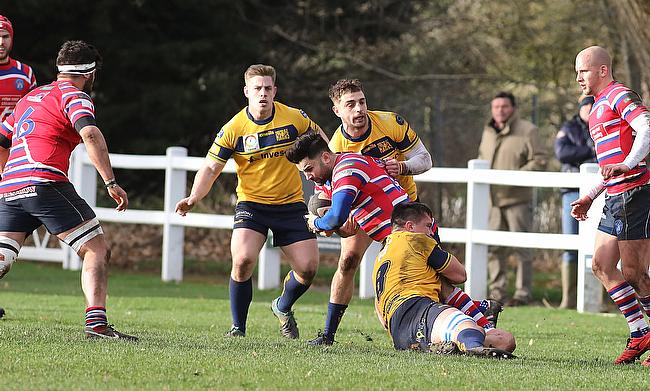 TJs had to battle back to secure a huge victory in the context of the title race and Peter Dankert’s menare now four points clear at the summit.

Taunton Titans are level on points with second-placed Henley after their win over Westcliff whilst Redruth have launched themselves into the promotion picture following their victory against Bury St Edmunds.

At the wrong end of the table, Sutton & Epsom have reignited their survival bid as they beat Barnes whilst elsewhere, Clifton hammered Bournemouth and there was also late drama in several matches across National Two South.

Tonbridge Juddians have moved four points clear at the top of National Two South as they came from behind at Dry Leas to defeat title rivals Henley Hawks.

The hosts led 17-6 at the break after tries from Bradley Cook and Alex Bradley, whilst Ben Bolster kicked seven points.

Will Robinson had landed two penalties for TJs and eight minutes into the second-half, the visitors began their fightback through Hugo Watson.

Just before the hour, TJs were awarded a penalty try to move them in front and Peter Dankert’s side went on to shut Henley out in the final quarter to clinch a potentially season-defining win.

Tony Yapp’s side are only outside the top two because the Hawks have drawn more games than Taunton, but three successive victories has kept the Titans’ promotion ambitions burning bright.

Westcliff’s tries came from Chris Marsh and Greg Bannister, but after their solid run of recent form, they were brought back down to earth by Taunton.

Redruth’s phenomenal run of form in National Two South continued as they battled back to beat Bury St Edmunds.

A solid first half display from the away side saw Todd Prisk and Richard Brown score a try apiece, but Bury responded just before the break through Patrick Robinson.

The Wolfpack were then able to turn the game on its head as Kodie Drury-Hawkins and Greg White both dotted down to make it 17-12.

However, the final quarter belonged to the Reds as Aaron Simmonds, Dean Bonds and Matt Shepherd all scored to secure the victory and the Cornwall outfit are now just three points off second place following 12 wins from their last 13 matches.

Bournemouth’s hopes of avoiding relegation from National Two South suffered a setback in Round 21 as they were brushed aside by Clifton.

Harry Bate, Bentley Halpin and Chris Levesley all scored braces whilst Jack Williams also crossed for Matt Salter’s side, who took advantage of the hosts’ indiscipline.

Bournemouth were close to claiming a four-try bonus point of their own, but only Sam Hardcastle, Ben Russell and James Griffiths dotted down for the home side.

Following this loss, the Lions remain 15 points from safety with a game in hand still to play.

Tries from Luke Arscott and Anthony Welling, either side of Kaz Henderson’s score for the Lions, gave the visitors a well-earned 12-7 lead.

Harry Glynn’s try for the hosts levelled things up, but with four minutes to go, Steven Plummer’s penalty looked to have won it for the Crusaders.

However, the Lions exerted immediate pressure on Dings and they won a late penalty which Young’s landed to clinch the victory for the Midlands club.

Tries from Luke Rapson (2) and Scott Coster gave the hosts a 19-13 lead at half-time, with Callum Monks and Charlie Gossington crossing for Esher.

After the break, Dominic Sprague pinged over three points for Old Reds, but Esher cut the deficit on 61 minutes as Andrew Hamilton dotted down.

Old Reds put themselves in the position to win the game when Sprague landed his second penalty, but Dow’s try two minutes from time rescued a share of the spoils for Esher. However, the visitors could have won the game but the away side remarkable charged down the resulting conversion.

A victory for Old Reds would have moved Alex Davies’ side to within nine points of safety, with a game in hand, but their wait for a first win since October rumbles on.

Worthing took a first-half lead through Matt McLean, Liam Perkins and Henry Anscombe before OA’s hit back thanks to a score from Connor Gracey as well as Harry Cavlan’s second try.

The away side still trailed with four minutes to go, but the drama then unfolded as Chris Napier powered over for a converted try before a last gasp penalty from Thompson snatched the win for OAs.

Sutton & Epsom produced an excellent comeback to beat Barnes as they boosted their survival hopes in National Two South.

A penalty try, a score from Bradley Meeson, and 11 points from the boot of Caolan Englefield saw S&E completely turn the game around at Rugby Lane.

Huge win for the 1XV! https://t.co/dxKLauKy7K

Barnes dominated the scoreboard in the first quarter, with Tom O’Toole crossing, before the visitors were awarded a penalty try.

However, their 14-0 lead faded away and Josh Davies’ late penalty salvaged a losing bonus-point for Joe Gray’s men.

Victory for Sutton & Epsom now leaves them 11 points from safety, but the Black and Whites still have a game in hand.