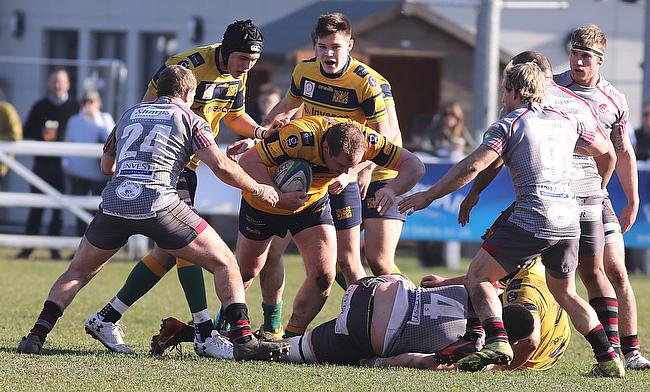 With early league leaders Henley Hawks travelling to an unbeaten Taunton Titans side in Round Four, this is undoubtedly the standout fixture in National Two South this weekend. Photo Credit: (Steve Karpa)

The Hawks make the 137-mile trip to the Towergate Stadium having made a superb start to the campaign, but Taunton have also picked up maximum points thus far. Both clubs were in the hunt for a top two spot last term so this early season clash could prove crucial when looking at the promotion picture this season.

Watching on from afar will be Tonbridge Juddians as they also look to maintain their 100 per record when they travel to Bournemouth whilst Clifton’s unbeaten beginning to the campaign will be put to the test against Leicester Lions.

Victory against Bournemouth in their last outing continued Henley Hawks’ storming start to the new National Two South season. Three straight wins and 162 points scored leaves Nigel Dudding’s side on top of the pile and in fact, they have won 14 of their last 15 games, but this weekend will put that record to the test.

The Hawks visit third-placed Taunton Titans, who have also picked up three bonus-point victories to begin the campaign. Tony Yapp’s side had to battle extremely hard to see off Worthing Raiders in Round Three, but if they were to conclude the month with a triumph over the current league leaders, it would be a signal of intent from the Somerset club.

Jack Nay insisted Tonbridge Juddians are purely focused on themselves despite two of their early season rivals facing one another in Round Four. This week, the TJs forward told ncarugby.com the club are aiming for a top two finish this term and Peter Dankert’s side are certainly setting their bar high after a blistering start to the campaign.

Tonbridge Juddians have made a scintillating start to the season and forward Jack Nay has highlight a parallel between his club and Gallagher Premiership champions Saracens??#Nat2shttps://t.co/dCrEpgHtEX

They have brushed aside Leicester Lions, Sutton & Epsom and Old Redcliffians so any hopes of Bournemouth halting the TJs train look fanciful. The newly-promoted side have shipped 152 points in their three matches and they are still searching for their maiden win of the term, but if they were to become the first side to beat Tonbridge Juddians since January, it would most certainly be the result of the season thus far.

Clifton are the final team to boast a 100 per cent record in National Two South after making it three successive victories against Bury St Edmunds last week. Matt Salter’s men are building on their excellent 2018/19 campaign and the Lavender and Blacks are certainly keeping pace with the early season frontrunners as September draws to a close.

However, Leicester Lions will present a strong and different challenge in Round Four. Gareth Collins’ side begun their debut season in National Two South with a heavy defeat against Tonbridge Juddians, but since then, the Lions have started to find their feet. Back-to-back triumphs over Old Albanian and Westcliff represent a solid month for Leicester and if they were to top it off with a victory against Clifton, any uncertainty about whether the Midlands club could compete in this division would be dispelled.

Director of Rugby Peter Winterbottom called on Esher to ‘put on a show’ in their first home match of the season in Round Three and his players certainly answered his call. The Surrey-based club secured a convincing win over Dings Crusaders and now Esher will be gunning for a hat-trick of victories when they travel to Bury St Edmunds this weekend.

The hosts have only been able to claim one win so far this season and they could and maybe should have doubled their tally last weekend away at Clifton. The Wolfpack were left to rue missed chances in their 18-14 defeat, but Bury are back on home turf in Round Four and they will be keen to end September with their second home victory of the campaign.

Worthing Raiders battled extremely hard to maintain their winning start to the season, but last weekend’s efforts against Taunton Titans only yielded two points as the Sussex club tasted defeat for the first time this term. The Raiders will still be able to take positives from that loss and when looking at the bigger picture, it has been a very encouraging September for Worthing.

To conclude the month, they entertain a Redruth side which, by their own omission, have been indifferent this term. Director of Rugby Nigel Hambly was distinctly unimpressed by his side’s showing against Barnes last weekend so if the Reds were able to secure just their second away win of 2019, it would be the perfect way to respond to the disappointment of Round Three.

Old Albanian may see this upcoming fixture with Old Redcliffians as an excellent opportunity to end September with three wins out of four to their name. They lost this fixture last year, but James Osborn and James Buckland’s men have made a solid start to this campaign and they face an Old Reds’ side who are still searching for their first victory of the season.

The hosts on Saturday were humbled by Tonbridge Juddians in Round Three so Alex Davies and his team will be desperate to get their campaign up and running with a home victory. Old Reds were excellent at Scotland Lane last season, with eight of their 10 wins coming on their own patch, so they are more than capable of producing a performance in front of their own supporters.

Following defeats against Clifton and Esher, Barnes may have been wondering how they hadn’t secured their first win of the season after scoring 65 points across both matches. However, Joe Gray’s side required just 12 points to claim their maiden triumph as the boot of Josh Hammett guided the London-based club to victory over Redruth in Round Three.

Barnes will now be keen to build on that win when they travel to Dings Crusaders and the hosts come into this fixture looking to bounce back from successive defeats. The Crusaders conceded eight tries against Esher in their last outing, but they did secure a deserved bonus-point which will be a plus for the Bristol club ahead of this clash with Barnes. Dings have actually won just one of their last eight games (stretching back to last season), but they do have the quality to end that unwanted record this weekend.

For both Sutton & Epsom and Westcliff, this weekend presents a chance for either side to claim their first win of the season since gaining promotion to National Two South. In terms of Westcliff, they have come close to kick-starting their campaign but narrow defeats against Dings Crusaders and Leicester Lions means they are still searching for that elusive victory, however, it doesn’t seem too far away.

Sutton & Epsom have had a tough start to life at this level considering Jeff Parsons’ men have already played the current top two sides in the division. The club have conceded 163 points in their three matches, but now the Black and Whites have an ideal opportunity to open their account for this season. S & E did defeat Westcliff on both occasions last year so the hosts will be hoping for a repeat at Rugby Lane on Saturday.