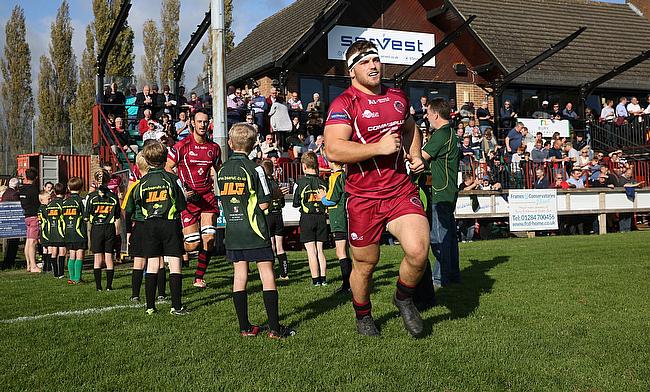 As fate would have it, National Two South will end the opening month of the campaign with all six of the early front runners in action against one another.

Taunton Titans became the new leaders of the division last week after a victory over Birmingham Solihull and this Saturday, they host fourth placed Canterbury who have won their last three matches.

The Titans replaced Rams RFC at the summit after the Berkshire club fell to their first defeat of the season against Old Albanian in Round Four. Seb Reynolds’ men will now be after a reaction when they entertain Bury St Edmunds, who currently occupy third spot in the table.

So, that leaves us with sixth v fifth as Old Albanian travel to Tonbridge Juddians with both sides aiming to end September with four wins to their name.

Once again, we are coming to the end of September and Taunton Titans are flying high in National Two South. For the last few years, Tony Yapp’s side have been in the top two heading into the second month of the season and it looks as though it might happen again after three wins from their first four games this term.

What has let Taunton down in recent campaigns has been a patchy run of form and they will be keen to avoid a repeat of that this year if they are to be serious promotion contenders. Also jostling for the top places at this early stage of the season are their next opponents, Canterbury. Like Taunton, the City Men have been plagued by inconsistency over the last couple of years, but a solid start to the season bodes well for Andy Pratt’s side. The Kent outfit travel to Somerset on the back of three straight wins and they will be aiming to add to that tally against the current league leaders this weekend.

Last week, Rams RFC were knocked off top spot after losing to Old Albanian which ended their winning start to the campaign. Seb Reynolds’ side remain just a point behind Taunton at this embryonic stage of the season and they will be hoping to put Round Four’s defeat to one side when they host third placed Bury St Edmunds this weekend.

While the Rams look to recover from a loss, Bury were able to do just that at the beginning of the season. Jon Curry’s men were defeated by Henley Hawks on the opening day, but they have bounced back with three straight wins against Old Albanian, Guernsey and Barnes. Both Bury and Rams RFC were promoted alongside each other into National Two South in 2015 and now both will be eyeing a victory this Saturday as they look to cement their positions at the right end of the table.

The final game involving sides in the top six sees Old Albanian visit Tonbridge Juddians. OAs, who were relegated to National Two South in April, showed their quality in Round Four as they ended Rams RFC’s 100 per cent record with a battling victory at Woollams. Gavin Hogg’s side have made a strong start to life back in this division and they will be eager to make it four wins from their first five matches when they take the trip to Kent this Saturday.

Fresh from our win last week against @Rams_RFC, this Saturday sees #oldalbanianrfc head to The Slade to face @TJRFC.

As for Tonbridge Juddians, they are slowly starting to come alive. After a defeat to near neighbours Canterbury in Round Two, Peter Dankett’s side have responded by securing successive victories over London Irish Wild Geese and Henley Hawks. TJs finished sixth last term and they are now beginning to show their qualities this season. A third consecutive home win would be a great way to end a positive month for Tonbridge Juddians and it would also see them leapfrog OAs in the table.

It was a tight affair, but Redruth clung on to a hard-fought victory over newly promoted Guernsey to return to winning ways last weekend. Pale Nonu’s side were thumped by Worthing Raiders in Round Three, but the Reds hit back with their third victory of the campaign and they will now be looking forward to the visit of Clifton.

The Gloucestershire outfit will be in high spirits when they take the trip to Cornwall having secured an impressive 37-15 win over Worthing last Saturday. It was a welcome victory for Matt Salter’s side after back to back defeats against Dings Crusaders and Taunton Titans, but now the Lavender and Blacks will be hoping to build on last week’s triumph as they look to conclude September in a positive fashion.

Worthing Raiders must have been very frustrated with themselves after last Saturday. Following a magnificent win over Redruth, the Raiders were second best against Clifton in Round Four as they slipped to their first defeat since the beginning of the month. Jody Levett’s side now sit in eighth place heading into the final week of September and they entertain Birmingham and Solihull in Round Five.

Worthing have won 12 of their last 16 matches at Roundstone Lane so Birmingham and Solihull have a tough task awaiting them in Sussex this weekend. Since the Bees claimed their first ever victory in this division against Old Redcliffians in Round Two, they have been on the end of two narrow defeats which leaves them in the bottom three at this early stage of the campaign. However, there are certainly positives for Pete Glackin’s side to take into this final fixture of the month so can the newly promoted side bounce back to end September on a high?

In Round Four, Henley Hawks were left disappointed as they fell to their second defeat on the spin as they lost to Tonbridge Juddians at Dry Leas. Nigel Dudding’s side had begun the season in fine form after consecutive victories over Bury St Edmunds and Barnes, but successive losses have taken the shine off a positive start to the campaign.

The Hawks will be hoping it is just a minor blip in form and they can return to winning ways this Saturday when they travel to Old Redcliffians. The hosts must have been delighted to have secured their first win of the season last weekend as they saw off fellow early strugglers London Irish Wild Geese at Hazlewood. Last season, Old Reds had to wait until November for their first triumph so they will be keen to build on their maiden win of this term by doubling their tally of victories this Saturday.

Dings Crusaders were very much in the contest with 20 minutes remaining against Canterbury last weekend, but Luke Arscott’s side conceded two late tries which saw them fall to a defeat in Kent. This was arguably Dings’ most disappointing result since returning to National Two South so the newly promoted side will be aiming to respond when they take on London Irish Wild Geese this weekend.

The Crusaders beat Birmingham and Solihull last time out at Shaftesbury Park and the latest visitors to their new home will be desperate to avoid a similar fate. Wild Geese enter the final fixture of September having lost all four of their matches this term and their defeat to Old Redcliffians last weekend would have been tough to take. Lee Starling’s side clearly have talent in their ranks – with five players appearing for London Irish against Northampton Wanderers at the beginning of the week – and the Wild Geese will be keen to display the quality they have at their disposal this Saturday as they go in search of their first victory.

On their return to National Two South, Barnes got off to a dream start. The newly promoted side defeated London Irish Wild Geese, but since the beginning of the month, Joe Gray’s men have not been able to taste that winning feeling again. Defeats against Henley Hawks, Old Albanian and Bury St Edmunds have seen them slide down the early league standings, but they have a great opportunity to gain their second victory of the term when they entertain Guernsey in Round Five.

Guernsey were promoted alongside Barnes, but the Island side are yet to get off the mark in their new division. Jordan Reynolds’ men are competing at this level for the first ever time in this club’s history and it has been a very tough start to life in National Two South for the Raiders. Guernsey have lost all four of their fixtures, however, they so nearly broke their duck in Round Four, but were narrowly edged out by Redruth last Saturday. The Raiders are getting close and they will be hoping their maiden victory of the season occurs in the capital this weekend.