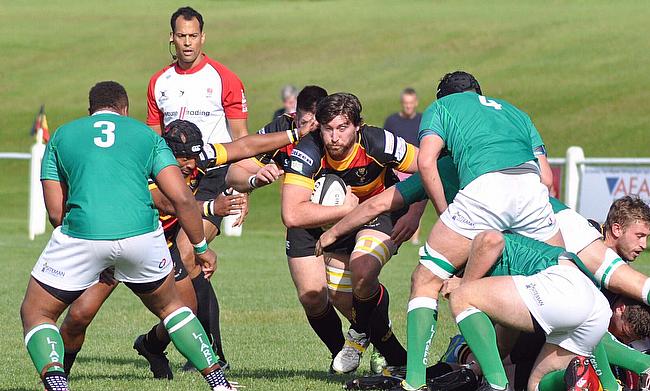 London Irish Wild Geese’s victory over Chinnor last weekend was arguably the result of the season so far and Lee Starling’s side will be eager to back that performance up by taking down the other title challengers this Saturday.

Wild Geese’s win at Kingsey Road allowed Cinderford to move to the summit of National Two South, but Paul Morris’ men now face the side that did them a favour as the teams meet at Hazelwood in Round 18.

The Cinderford Director of Rugby has warned against complacency as his side head to Sunbury-On-Thames having won their last 11 games and second placed Chinnor will be hoping Wild Geese can rock the boat again.

In the bottom half of the table, Canterbury host a buoyant Old Redcliffians and there is a vital game between Clifton and Broadstreet.

‘We put the pressure on Chinnor and we took our chance’. Those were the words of Cinderford’s George Evans this week as his side moved to the top of National Two South in Round 17 following a 34-6 victory over Henley Hawks. The Foresters have now won their last 11 games and after Chinnor’s home defeat last Saturday, Paul Morris’ men are four points clear at the top heading into this fixture with London Irish Wild Geese.

If a visit to Hazlewood was going to be a tricky test for the new league leaders, it will be made all the more difficult by the performance London Irish Wild Geese produced last weekend against Chinnor. Lee Starling’s men outplayed a side that were unbeaten and thoroughly deserved to claim the result of the season so far. In terms of the Wild Geese themselves, that victory leaves them 11th in the table and there is no reason why the Sunbury-On-Thames side can’t upset the odds once again.

I am sure there would have been a few followers of National Two South very surprised by the result which came out of Kingsey Road last Saturday. Chinnor had not lost on their own patch for nearly two years, but Matt Williams’ side saw that record and their unbeaten run in this campaign come to an end as they were defeated by London Irish Wild Geese. It was around this time last season where Chinnor suffered a mini blip in form, which played a part in them not securing a top two place, so the perfect response to last week’s disappointment would be a victory against an in-form Redingensians side.

After suffering their first loss of the term, this fixture will not be the easiest for Chinnor this Saturday. Redingensians currently occupy third spot in the division following a run of 11 wins from their last 12 games and they are now just nine points behind Chinnor heading into this clash at Old Bath Road. The Rams have been in scintillating form this season as they continue to make a name for themselves in National Two South and victory against Chinnor this weekend could open the door for a possible push at a top two finish.

Fourth placed Taunton Titans began the New Year with a comfortable 53-12 victory over Barnstaple as they continue to reignite their season. Tony Yapp’s side suffered a downturn in form following nine straight victories at the beginning of the campaign and the Titans Head Coach stated that his side’s promotion ambitions were over for another term. Despite Chinnor’s loss last Saturday, Taunton are 13 points behind  the top two so they will be focused on a strong second half of the season.

The Somerset club have won seven of their nine games on home soil so far, but they welcome a buoyant Wimbledon side to the Commsplus Stadium in Round 18. The Dons currently sit at the foot of this division, but a victory over Redruth last weekend has given the South-West London side some hope. Wimbledon are now 11 points from safety as things stand, thanks to two victories from their last three matches and another result this weekend would certainly give the Dons a real chance of pulling off a remarkable escape.

Redruth were left stunned by Wimbledon last weekend as Pale Nonu’s side fell to a disappointing loss against the division’s bottom club. The Reds had several players missing through injury and illness which meant they had just four replacements on the bench so they will be hoping to be in better shape for their trip to Worthing Raiders this Saturday.

The Cornwall-based side are currently fifth in the table, but they have won just twice on the road so far this term so Worthing will look to exploit that this weekend. The Raiders began 2018 with a loss at Redingensians, but they have won five of their last seven matches which has seen Jody Levett’s side rise to eighth in the league standings. Worthing are just five points behind Redruth heading into this contest and a sixth home win on the spin would leave the men from Roundstone Lane on the cusp of the top five.

Henley Hawks’ result against Cinderford last weekend paled into insignificance following the tragic news that one of their 4th XV players, Simon Priestley, sadly passed away during a game against High Wycombe. The Hawks will no doubt be looking to produce a strong performance this Saturday at Dry Leas in memory of Simon and also they will want to continue their positive campaign. Henley are currently sixth in the table so a fifth home win on the trot would keep Pete Davies’ side moving in the right direction.

As for their visitors Tonbridge Juddians, they made it three consecutive wins in Round 17 as they secured victory over Clifton at The Slade. TJs are having a fine season at this level following promotion last April as they currently occupy 10th in the table as they prepare to travel to Oxfordshire this Saturday. TJs won the reverse fixture against the Hawks 20-14 back in September and in fact, both sides have won 10 matches apiece this term. Who will make it 11 wins this weekend?

Bury St Edmunds ended a tough run of fixtures by claiming victory over Broadstreet just before the Christmas break, but Head Coach Ollie Smith would have been frustrated last weekend following their defeat against Old Redcliffians. The Wolfpack have now lost four of their last five matches which is the worst run of form they have been on since Smith took charge of the club at the beginning of the season, but they have the chance to put that right this Saturday as they go in search of a seventh home win of the campaign against Barnstaple.

On the visitors’ website, they claimed that Barum’s humbling loss against Taunton Titans was the worst performance they have seen at Pottington Road for ‘a while’. Defeat for Steve Perry’s men means they have not won in four matches and they are 13 points clear of the relegation zone. Granted, the Devonshire side have been missing some key players recently, but Barnstaple will be keen to get their season back on right path with a third away win of the campaign.

Old Redcliffians travel to Canterbury this weekend following a potential season defining result last Saturday. The men from Scotland Lane began their centenary year with a fine 24-14 win over Bury St Edmunds which now leaves them in touching distance of safety following 15 points from their last six games. Head Coach Saul Nelson said after the victory that it must be a ‘stepping stone to more wins’ and the Old Reds will hoping their next triumph is just around the corner.

They are only five points adrift of safety, but aiming to burst their bubble are Canterbury. The City Men fell to their fourth straight defeat in Round 17 as they narrowly lost to Broadstreet and their poor form has seen Andy Pratt’s side slide down to ninth in the table after a promising start to the campaign. Canterbury have not won at home since the end of November and this would be the perfect time to gain another victory at the Marine Travel Ground.

Last weekend was the nightmare scenario for Clifton. After falling to their ninth defeat from their last 10 matches away at Tonbridge Juddians, all three of the sides directly below them in the relegation places secured victories. After having a comfortable cushion between themselves and the drop zone, Darren Lloyd’s side are now just five points clear of the bottom three as they head into this crucial game with rivals Broadstreet.

Back in November, Street Head Coach Paul Hurst said his side’s poor run of form was far from hopeless and he added he was confident that the Midlands club could secure their league status. Fast-forward two months and Hurst’s comments seem spot on as Broadstreet have given themselves a real chance of escaping relegation. A crucial win over Canterbury last Saturday means Street are now nine points from safety and with Clifton sitting in the place above the relegation spots, a win for Hurst’s side this weekend would give them even more belief that they can beat the drop.