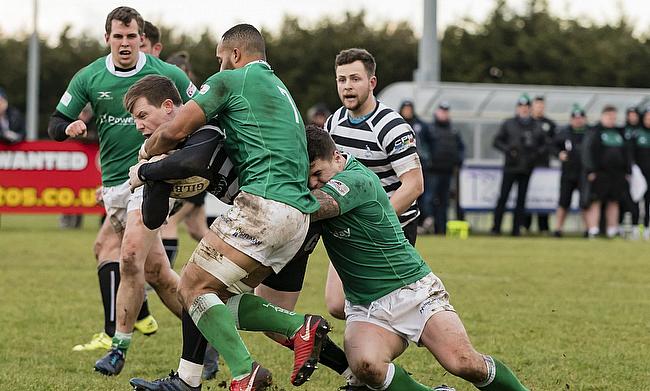 London Irish Wild Geese produced an excellent performance to end Chinnor’s sixteen-match unbeaten run in National Two South to knock Matt Williams’ side off the summit of the division.

The Black and Whites’ first defeat of the campaign saw them slip down to second in the table as Cinderford capitalised on Chinnor’s defeat as they beat Henley Hawks to go top.

There were also some amazing results at the bottom of the league as all three of the sides currently in the relegation zone – Wimbledon, Broadstreet and Old Redcliffians – secured victories to give them belief that they can avoid the trapdoor.

Cinderford moved to the top of National Two South following a hard fought victory over Henley Hawks at Dockham Road.

The Foresters led 10-6 at the break thanks to tries from Lewis Beer and Reuben Norville.

George Jackson kicked two penalties for the Hawks, but they were unable to get going after the interval.

Chinnor’s unbeaten start to the season came to an end as they were stunned by London Irish Wild Geese at Kingsey Road.

Matt Williams’ side were on a 15-match winning streak and they had not lost at home for nearly two years, but Wild Geese capitalised on a below-par performance by Chinnor.

Reon Joseph scored in the first half before George Owen –  plus three other tries – completed a superb win for Lee Starling’s men.

Kieran Goss, Ben Manning and George Oliver touched down for the hosts, who did lead this contest at the beginning of the second period.

Chinnor are now four points behind leaders Cinderford while Wild Geese are up to 11th.

Redingensians scored three quick-fire tries as they secured their eleventh win from their last 12 games with victory over Worthing Raiders.

Tom Vooght (2) and Colin Thompson helped the Rams race into a 15-point lead before Olly Foxley’s score gave the home side a 20-7 half-time lead, with David McIlwaine replying for Worthing.

Ben Henderson, Robbie Stapley and Jordan Souter touched down after the break for the hosts, but Worthing were able to rally to a well- earned point as Jack Maslan, Jack Forest and Matt McLean all crossed.

Wimbledon claimed their second National Two South win of the season by edging out Redruth at Barham Road.

Charlie Esam’s try midway through the second period proved to be enough for the Dons to secure a vital victory despite a late fightback from Redruth.

Wimbledon were on course for their second triumph of the campaign at half-time thanks to tries from Niall MacSweeney, Matt Gilbert and Dylan Flashman, but Redruth kept hot on the heels of their hosts following scores from Tipiloma Kivalu and Shaun Buzza.

After the break, Rhys Morgan and Esam crossed for the hosts to put them 33-14 up and even though Pale Nonu and Kivalu crossed in the final 10 minutes for Redruth, the Dons were able to hold on to a victory which leaves them 11 points from safety.

A penalty try and a score from Ethan Doyle helped Old Reds to a 12-7 half-time lead, with Chris Lord responding for the visitors.

Touchdowns from James Clements and replacement Ben Fry saw the hosts take the game away from Bury meaning Lord’s second score was merely a consolation for the Wolfpack while Old Reds celebrated a crucial win.

Broadstreet made it a trio of victories for the teams currently in the relegation zone as they edged past Canterbury.

Paul Hurst’s team took a 5-0 lead thanks to George Walsh’s try, but Canterbury hit back as quick ball allowed Frankie Morgan to go over for a converted score.

However, Street were gifted a lead which they never relinquished just before break as Andrew Murray capitalised on a Canterbury knock on to dot down.

The Midlands club were then able to hold on to their advantage to claim their third win of the campaign which leaves them nine points adrift of safety.

Tonbridge Juddians made it four wins from their last five fixtures following a gutsy victory over Clifton at The Slade.

A try from Duncan Tout kept TJs in touch with their visitors as Clifton led 7-5 after opening the scoring.

The Lavender and Blacks landed a penalty just after the break, but a brace from George Lawson proved to be the difference for the hosts as they clinched the win.