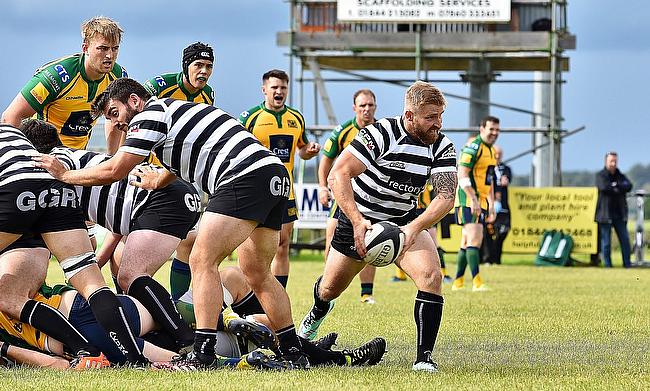 League leaders Chinnor are aiming to be on top of pile in National Two South come Saturday evening as Matt Williams’ side look to enter 2018 with their unbeaten record intact.

The men from Kingsey Road have been singing off the same hymn sheet this season which has helped them to 14 wins from 15 matches, but their form will be put to the test this weekend when they travel to a confident Henley Hawks outfit.

Waiting in the wings if Chinnor were to slip up are Cinderford who remain just a point behind the table toppers. It is a local derby for Paul Morris’ men this weekend as they take the trip to Clifton. Meanwhile, third placed Redingensians go to London Irish Wild Geese, Taunton Titans host Old Redcliffians and Redruth entertain Barnstaple.

Chinnor extended their unbeaten run to 15 games last weekend as a dazzling display of seven tries helped them to victory over Canterbury. It is now 14 wins on the bounce for Matt Williams’ side who remain at the summit of National Two South heading into the final game of the year and another victory on Saturday would leave them on top of the tree at Christmas.

Henley Hawks will be in no mood for handing out any early gifts at this festive time of year and their recent run of form also suggests that too. Pete Davies’ men have moved up to fifth in the table following five wins from their last six matches. This is Henley’s best run of results in this division since they won the title in 2015 and they will give Chinnor a stern test in this Oxfordshire derby this weekend.

It is only natural for people to start winding down for the Christmas period at this time of year, but for Cinderford, they know they won’t want to take their foot of the pedal for the holidays until Saturday evening. Paul Morris’ side visit Gloucestershire rivals Clifton on this weekend currently sitting just a point behind league leaders Chinnor. The men from the Forest have won nine straight matches to keep the pressure on the table toppers and they are firm favourites to take that tally into double figures this weekend.

While Cinderford are in scintillating form – which is highlighted by the fact they have scored 601 points so far this season – Clifton are desperate for a victory. Darren Lloyd’s men have won just one of their last eight games which is their worst run of form since January 2016. The Lavender and Blacks are nine points clear of the bottom three as things stand, but all they will want at this time of year is a much needed victory to end the rut they find themselves in.

Redingensians may not want 2017 to come to an end. It has been a fabulous 12 months for Owen Root’s side and they are completing this calendar year in some style. The Rams were promoted to this division in 2015 and since then, they have continued to progress. Now, the men from Old Bath Road enter this fixture with London Irish Wild Geese having won nine of their last 10 games which has seen them move up to third in the division.

It has been a brilliant campaign for the Rams and it has been a very good season for London Irish Wild Geese as well. Lee Starling’s men battled against relegation last year, but their performances in the first half of this campaign mean they don’t look in any particular danger of being embroiled in another fight for survival. Wild Geese occupy 12th place as things stand, but they are 15 points clear of the drop zone following two victories in their last five games. Redingensians thrashed the men from Hazlewood back in September so they will be out for revenge this weekend.

Taunton Titans Head Coach Tony Yapp admitted this week that the top two spots in National Two South have ‘realistically’ already gone this season. The Somerset club had made a flying start to the campaign as they won their first nine games, but they begin the second half of the term fourth in the table and they are on a run of one win from their last six matches heading into this fixture with Old Redcliffians.

As for Old Reds, a defeat to bottom of the table Wimbledon last weekend would have been massively frustrating. The men from Scotland Lane have seen a small upturn in form which included a draw with Barnstaple and a victory over Broadstreet, but their setback in Bristol last Saturday means they are nine points from safety heading into the Christmas break. Despite Taunton’s wretched run of recent form, this will be a tough ask for Saul Nelson’s men at the Commsplus Stadium, but an upset is certainly not out of the question.

It is Cornwall against Devon this weekend as Redruth take on Barnstaple at the Recreation Ground in Round 16. The hosts come into this fixture on the back of two hard fought wins against Tonbridge Juddians and Broadstreet and Pale Nonu’s side will be aiming to make it a trio of victories this weekend as they look to stay in the top six before the Christmas interlude.

As for Barnstaple, Steve Perry’s side are having a solid season and just one defeat from their last four games highlights this. Barum did extremely well to stay in this division last term and the men from Pottington Road are 18 points clear of the drop zone this time around and it looks as though they will have enough in their locker to stay clear of trouble. Barnstaple travel south this weekend aiming to clinch their third away win of the season to round off a very good year.

An injury hit Canterbury put in a spirited second half display against league leaders Chinnor last Saturday, but unfortunately for Andy Pratt’s men, the damage was done in the first period when they conceded 29 points. It has been a tough couple of weeks for the City Men – who also lost to third placed Redingensians – so they will be wanting a reaction when they face Tonbridge Juddians in this Kent derby.

Canterbury are currently seventh in the table, but seven points and three places behind them are Tonbridge Juddians. Since promotion from National Three London and SE, the men from the Slade have adapted to the fourth tier of English rugby very well. TJs have won seven of their 15 matches this term and arguably their highlight of the season was their latest victory over Taunton Titans. Peter Dankert’s side have certainly had a steady campaign so far and a derby day win would complete an excellent 12 months for TJs.

Last week, Bury St Edmunds Head Coach Ollie Smith stated that any shot of promotion from National Two South had disappeared, but the fact that the former British and Irish Lion was aiming for a top two finish just shows how far this club has come since joining this division in 2015. Currently, the Wolfpack sit eighth in the table and Smith’s comments are realistic as the Wolfpack enter this weekend having won just one of their last five games.

It is Bury’s worst run of form this season, but they have the chance to enter the Christmas break on a high when they take on Broadstreet. The Midlands club travel to Suffolk this weekend currently in the bottom three and 18 points adrift of safety. Paul Hurst and his players knew it would be tough coming into the southern league for the first time and that is proving to be the case, but a win on their travels against Wimbledon two weeks ago could inspire this talented Street side to another triumph on the road.

Five wins from their last seven games has been an excellent response by Worthing Raiders. Granted, they had some tough fixtures prior to this good run of form, but Jody Levett’s side have been excellent since their sequence of six straight defeats. Their recent positive performances have guided the Raiders to ninth in the table and any repeat of last year’s relegation battle is now very unlikely.

In contrast, the visitors to Roundstone Lane this Saturday are very much fighting for their lives. Wimbledon currently prop up the division, but they gave themselves a glimmer of hope last Saturday when they beat relegation rivals Old Redcliffians. That maiden win at this level for the Dons means they are now 17 points away from climbing out of danger so there is still a lot of work to be done, but if they can drive home for Christmas with a victory under the belts then maybe a great escape could be on the cards in the second half of this season.