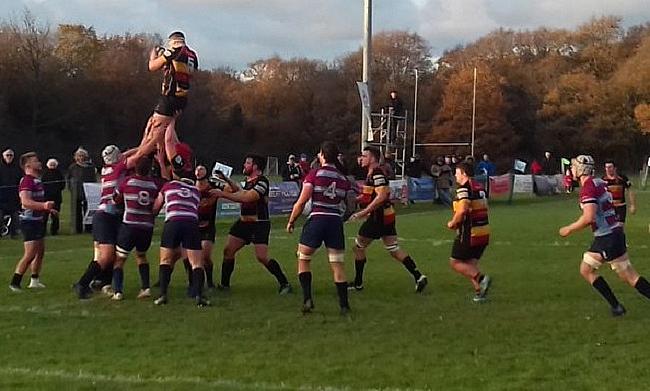 Wimbledon and Old Redcliffians picked up crucial results in Round 19 of National Two South as both sides recorded victories to enhance their chances of avoiding relegation.

The Dons picked up their third win in five matches as they stunned Bury St Edmunds to move off the bottom of the division while successive home triumphs has left Old Reds just four points adrift of safety.

The other club currently in the drop zone is Broadstreet who are now 12 points away from climbing out of the bottom three following a home defeat against Henley Hawks.

At the right end of this division, Cinderford and Chinnor will go into their top of the table clash this weekend with just four points separating the two sides after both secured comfortable wins over Redingensians and Worthing Raiders, respectively.

Elsewhere, Redruth came from behind to beat Taunton Titans, Tonbridge Juddians continued their fine form and Barnstaple got the better of Canterbury.

Cinderford enhanced their promotion chances by staying on top of the National Two South table thanks to a bonus-point win over third place Redingensians at Dockham Road.

A try by Harry Hone helped the Gloucestershire side to a 5-0 lead, but the game was level at the break as Connor Corrigan touched down for the Rams.

Hone crossed the line again to put the hosts in front before a brace from Rob Winchle ensured a maximum points return for his side.

First half tries from Tom Jubb and Orisi Nawaqaliva were both converted by Jonny Bentley, but Worthing were able to stay in touch.

Only 5 days till the top of the table clash at Kingsey Rd. Come and support the villagers . #LeCrunch pic.twitter.com/KQM5Iqwbba

A touchdown at the start of the second period reduced Chinnor’s lead to four points, but from there, the floodgates opened and the hosts were rampant.

Danny Barnes grabbed a brace while Phil Chesters, Greg Goodfellow, Will Bordill and Kieran Goss brought up the 50 points for Matt Williams’ side.

Redruth returned to winning ways in fine style to beat Taunton Titans at the Recreation Ground and claim their first win in 2018.

Tries from Jack Claydon and Dan Frost helped Taunton edge into a 17-10 half-time lead and Ben Oliphant-Thompson extended the visitors’ advantage after the break.

But then the Redruth fightback got underway. Kyle Marriott went over on 50 minutes to add to scores by Richard Brown and Rob Coote, before AJ Cant’s converted effort on the hour gave the Reds the lead.

Taunton just couldn’t find a way back into this contest and their defeat was confirmed when Marriott and Mark Grubb crossed to seal Redruth’s ninth home win of the season.

Tries for Tibbatts and David Hyde gave the visitors a 14-0 lead, but they allowed Broadstreet to cross twice before the break as the Midlands club cut Henley’s advantage to just two points.

Dan Glasse went close to scoring his second try for Street after the restart, but Henley were able to take control around the hour mark as Tibbatts completed his hat-trick.

George Primett ran in Henley’s fifth try while replacement Scott White wrapped up the victory for Pete Davies’ side.

Wimbledon produced a stunning second half performance to move off the bottom of National Two South following victory over Bury St Edmunds.

The Dons have now won three of their last five games which leaves them 11 points off safety, but they had to come from behind to keep their hopes of survival alive.

Tony Mann's match report is now up on the website see.. https://t.co/oqa9ohqutU

Tries from Collen Smith and Boyd Rouse gave Bury a 12-8 half-time lead, with a James Doe penalty and a Dan Charles try keeping Wimbledon in touch.

And the hosts took a firm control after the break as they ran in 24 unanswered points.

Dylan Flashman and Dan Laventure put the Dons ahead before a penalty try and a second for Laventure secured the vital bonus-point win for Wimbledon.

Tonbridge Juddians scored three tries to earn their fifth win on the spin and condemn London Irish Wild Geese to back to back home defeats.

An early Wild Geese try was cancelled out by three Liam Prescott penalties to give TJs a narrow lead.

And their advantage may have been under threat when Reece Conlon was red-carded, but the visitors did not seem fazed after the break.

Mike O’Sullivan crossed, but their lead was cut to four points as the home side went over for their second score of the match.

However, with 10 minutes to go TJs killed off this contest as Ben Ashmore and Duncan Tout both dotted down to seal another strong performance by the Kent outfit.

Barnstaple ended a five game winless streak as they earnt a victory over Canterbury at Pottington Road.

This triumph was Barum’s first since the beginning of December and with other sides in the bottom half now starting to pick up points, this was a welcome victory for Steve Perry’s men.

Tries from Luke Berry and Jordan Petherbridge in the first half, plus a drop-goal from Gywn Parks, put Barnstaple ahead before Parks’ boot and Will Topps’ score saw Barum home.

Old Redcliffians moved to within four points of safety in National Two South thanks to a convincing victory over rivals Clifton at Scotland Lane.

The hosts were 22-0 up at half-time before running in two more scores after the break to complete a vital five-try victory.

Old Reds have won two of their last three games to leave them on the verge of climbing out of the relegation zone while after victory over Broadstreet last week; this defeat for Clifton is a major setback in their attempts to move away from danger.