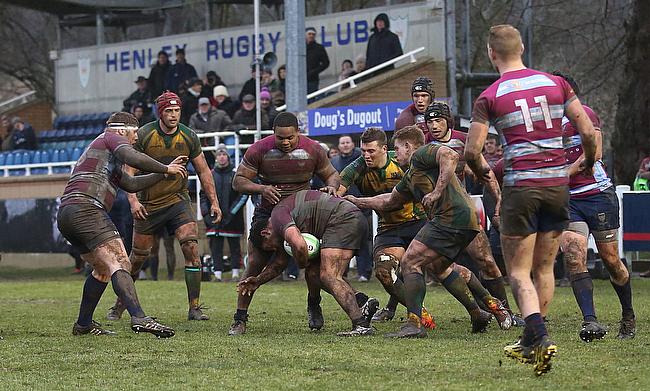 The Dons’ win away at Henley means they are now just nine points from safety after a remarkable run of recent form while Wild Geese’s triumph over Barnstaple was a welcome victory for Lee Starling’s side.

Their relegation rivals, Broadstreet, Old Redcliffians and Clifton all suffered defeats as the fight for survival continues to heat up.

At the right end of the table, Cinderford secured their 16th win on the spin as they beat Tonbridge Juddians while Taunton Titans came from behind to win at Canterbury and Worthing Raiders battled to a home victory against Bury St Edmunds.

The hosts remain 10 points clear at the summit while TJs have dropped back into the bottom half of the table.

Matt Lane latched on to an offload from Reuben Norville for the opening try, while James Eliot and Nathan Taylor both went over in the first period.

Lane added his second to put the game out of TJ’s reach as Paul Morris’ men continue their march towards the title and promotion to National One.

Chinnor kept up their pursuit of Cinderford, but they were made to battle against Broadstreet at Kingsey Road.

A try from George Oliver was cancelled out by Broadstreet, but scores by Greg Goodfellow and Jonny Bentley saw Chinnor lead 17-5 at half-time.

Tries by @george_oliver7 @Gregor85 @jonnybentley10 @mikeymacc910 secure a bonus point win for @ChinnorRugby over @broadstreetrfc in @Nat2RugbySouth . Another afternoon of difficult conditions!! Well played Broadstreet for making it a tough afternoon & good luck on the run in!! pic.twitter.com/28TgyiaiEk

Both teams swapped tries after the break, with Mike MacDonald going over for Chinnor, but Broadstreet refused to lie down.

A third try of the afternoon gave them belief, but a red card as well as penalty from Bentley ended any hopes of a Broadstreet fightback as Chinnor ground out the win.

Taunton Titans came from behind to beat Canterbury in Kent to continue their excellent recent form.

The Titans established a first-half lead thanks to a try from Dan Frost, but Canterbury hit back after the interval.

Aiden Moss’s score brought the hosts level before Oli Best dotted down to put the City Men in front.

However, Frost added a second try to his tally to nudge Taunton ahead and Lewis Webb scored shortly after to clinch the win for Tony Yapp’s side.

Old Redcliffians lost to Redingensians, but they are now just four points from safety in National Two South despite this defeat at Scotland Lane.

Number 8 Josh Collis grabbed two tries inside the opening 40 to make it 14-0 to the Rams heading into the second period.

Old Reds hit back with a try, but Miles Lloyd’s effort ultimately sealed the game for Seb Reynolds’ men.

The hosts did score a second late on to seal a losing bonus-point, which could be vital in their fight for survival.

Clifton have slipped further towards the relegation places in National Two South following this defeat at home to Redruth.

The loss for the hosts means they are now four points clear of the drop zone, but Redruth deserved their victory as they controlled possession in tough conditions.

Wimbledon boosted their survival chances in National Two South as they battled to victory against Henley Hawks.

Here is @HenleyHawks match report on the 1’s away victory last Saturdayhttps://t.co/EhdlAwq6wM
not sure if we have one but will post it soon if we have!

The Dons have now won five of their last eight games to move to within nine points of safety.

The visitors were 14-0 up at half-time following scores from Matt Gilbert and the in-form Dan Laventure before Ben Brookes sealed an excellent victory for Wimbledon by going over for their third try in the second half.

Worthing Raiders brought a three-match losing streak to an end with a hard-fought bonus-point win over Bury St Edmunds at Roundstone Lane.

Mark Kohler went over early for Bury and after Will Grief had hit back for Worthing, the visitors extended their lead through Guillame Duplenne.

Kiba Richards touched down for the hosts before the break to leave it 15-14 to Bury.

After the restart, Jonathan Whittall’s score put Worthing in front for the first time in this encounter, but the boot of Fraser Honey wrestled back the advantage for Bury.

However it was his opposite number, Matt McLean, which clinched the win for Worthing as he slotted over a penalty five minutes from time.

London Irish Wild Geese recorded their first win since the beginning of January as they beat Barnstaple to ease their relegation concerns.

The hosts led 13-10 at the break thanks to penalty try and two penalties, with Jarrard Hayler crossing for Barum.

Wild Geese scored four tries in the second period to secure a vital victory which leaves them nine points clear of the drop zone while scores from Ryan Carter and Luke Berry were just a consolation for the away side.