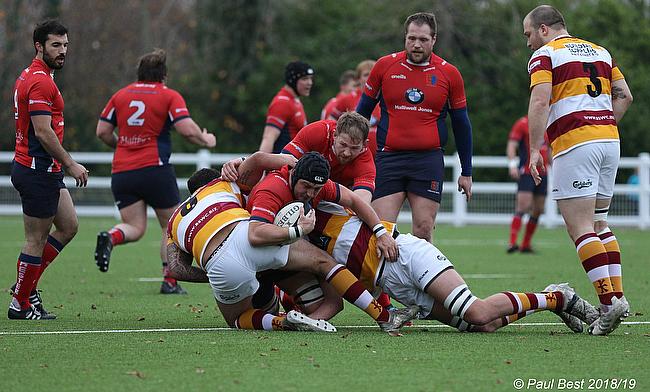 Chester or Fylde can potentially take an important step towards a top two finish in National Two North when the sides meet at Woodlands on Saturday. (Photo Credit: Paul Best)

As things stand, Chester currently occupy second place and they sit just two points clear of Fylde heading into Round 26.

With five games to go, this fixture could prove to be decisive in the battle for promotion while current table toppers Hull Ionians face a tricky test against Otley and rivals Huddersfield (4th) host South Leicester.

Just seven points separate the top four so it could go down to the wire at the summit while down at the bottom, it is nearly time up for Macclesfield.

The Blues are 19 points adrift of safety and parted ways with head coach Marshall Gadd this week, but it is a necessity for Macc to secure a positive result against Peterborough Lions on Saturday. Failure to do so could see them relegated if Sheffield Tigers better Macclesfield’s result when they take on Wharfedale.

‘Any more performances like that and it will be mid-table mediocrity.’ The final line from Hull Ionians’ match report from their game with Sedgley Park was scathing as the league leaders’ promotion bid suffered a setback in Round 25. The I’s looked like they were back to their best after recent wins over rivals Fylde and Huddersfield, but now they must respond again to stay in control of their own destiny following their first home loss of the campaign.

Martyn Wood’s side remain one point clear at the summit, but they face arguably their toughest task between now and the end of the season when they travel to Otley on Saturday. The Yorkshire club are having a strong season and they could play a major role in the promotion race as Tom Casson and Charlie Maunder’s men also come up against Chester and Fylde before the conclusion of the season. Otley have won their last nine games at Cross Green while Hull Ionians have lost three of their last four matches on the road. Whatever the outcome, this fixture will certainly have an effect on the battle for a top two finish.

What a couple of weeks it could be for Chester. The second-placed side host top two rivals Huddersfield to conclude March, but first up they travel to fellow promotion contenders Fylde in one of the biggest games of the National Two North season. Jan van Deventer’s men ended February with a mini wobble, but began this month with successive wins against South Leicester and Wharfedale.

The build-up continues ahead of a huge weekend in the National Leagues. #Nat2n #Nat1 #Nat2s

The men from Hare Lane are once again in charge of their own fate and if they are to win at Woodlands this weekend, it would be a significant step in the right direction. However, their hosts Fylde are breathing down their necks. Warren Spragg’s men sit just two points behind Chester and similarly to their opponents on Saturday, the Lancashire club have responded from a recent setback in a strong manner. Convincing victories over Stourbridge and South Leicester has got their promotion challenge back on track and after ending Chester’s 11-month unbeaten home record earlier in the season, Fylde will be keen to do the double as they aim to move back into the play-off place.

Huddersfield’s win over Tynedale last weekend could prove pivotal in the race for promotion, but in the short term, the victory is exactly what Gareth Lewis’ side needed. Following three consecutive defeats, the Yorkshire club’s top two challenge had been dented, but they managed to reignite their hopes in testing conditions against Tyne. Chris Johnson guided Field to the win and now they sit six points behind Chester with five games remaining in the campaign.

With the aforementioned Chester to come next weekend, Field cannot afford to slip-up when they host South Leicester on Saturday. The home side will be favourites for this game as South come into this clash on the back of three humbling losses against the top three sides and it doesn’t get any easier for the men from Welford Road. The Midlands club also have to play Otley and Sedgley Park before the end of the season and as they sit 15 points from safety, you have to feel anything other than a positive result this weekend would be another serious blow to their survival chances.

Sedgley Park finished second in the 2017/18 season and although it is extremely unlikely they will match that this term, Matt Bebbington’s side will have a say in the race for a top two finish. The Tigers play Chester, Fylde and Huddersfield in their final three games and considering the form Sedge are in, they could have a massive impact on the promotion battle.

Club training is Tuesday and Thursday for all teams. We are now at point where the club can train together.#oneclub We even had a little incentive Tuesday with dominos after training. Anyone keen to get involved till the end of the season 7pm starts. Let go tigers, big final push pic.twitter.com/P8X4eQkGTF

Sedge have won four games on the trot and their last win over Hull Ionians shows exactly what the men from Park Lane are capable of. They will be keen to continue their recent renaissance against Stourbridge this weekend and the Midlands club also come into Round 26 in good form.Their rescheduled clash with Wharfedale was postponed last weekend so Neil Mitchell’s side travel to the North-West having lost just one of their last five games. In their most recent match, they hammered promotion chasing Huddersfield and the 10th placed side will be hoping for a similar display this weekend.

It was a rare feeling for Tynedale last weekend. Ben Woods’ side suffered their first home defeat since September as the boot of Chris Johnson guided Huddersfield to a narrow 15-14 victory at Corbridge. Despite the defeat, Tyne were able to move up to seventh place in the table and with the top six now being their target, they will be keen to return to winning ways when they visit Leicester Lions in Round 26.

The hosts will also be looking to bounce back this week as they were defeated by Sheffield Tigers in their last outing. Andy Key’s men produced too many errors in Round 25 and were edged out by the Yorkshire club, but the Lions know a victory on Saturday at TMDP Park would guarantee them another campaign in National Two North next season. The Midlands side have won their last two home matches and they will be eager to make it a hat-trick of victories in Round 26.

The last time Preston Grasshoppers met Hinckley back in November, it was arguably the Lancashire club’s worst performance of the campaign. Paul Arnold’s men were beaten 49-5 at Leicester Road, but that may seem like a distance memory for Hoppers who are ending their return to National Two North with a flourish.

They come into this fixture following five straight wins and their goal between now and the end of the season will be to finish in the top eight. The same aim may apply to Hinckley, but rather than concluding the season in a positive manner, the Hornets seem to have lost their sting. George Chuter’s side currently sit ninth in the table and their recent dip is down to five defeats from their last six matches. On the road, it hasn’t been great for the Midlands club this term, but a fourth away win of the season on Saturday would certainly provide a welcome boost for Hinckley.

Last week, there was frustration for Wharfedale. Their rearranged fixture with Stourbridge was once again called off due to the bad weather so the Greens will now face the Midlands club on Easter Saturday, but the postponement also delayed the chance for Dale to bounce back from two straight defeats. Rob Baldwin and Jon Feeley’s side had been flying prior to March, but the Yorkshire club’s charge towards a top eight finish has just been halted this month after losses against Leicester Lions and Chester, respectively.

Dale take the trip to Sheffield Tigers in Round 26 as they aim for their first victory in exactly a month whilst the home side come into this fixture in better spirits. Jamie Broadley’s men picked up a crucial win over Leicester Lions last time out and the victory means they are now 15 points clear of the relegation places. In truth, one more victory for the Tigers should rubber-stamp their position in National Two North for another campaign and a first home win since the middle of January would certainly be a significant result.

After producing a wonderful response against Sheffield Tigers in Round 24 to secure a much-needed victory, Macclesfield were unable to build upon that result last time out. The Blues were beaten by Tynedale two weeks ago and since their last game, head coach Marshall Gadd has left the club.

Andy Appleyard will now take charge of Macc’s final five games with the club 19 points from safety and they must match or better Sheffield Tigers’ result on Saturday to avoid the drop. They face Peterborough Lions this weekend and the visitors to Priory Park have already had their fate sealed after suffering relegation following their loss against Preston Grasshoppers in Round 25. All that is left for the Lions to play for is pride and if they were to gain only their fifth win of the season, they could end Macclesfield’s two year stay in this division.