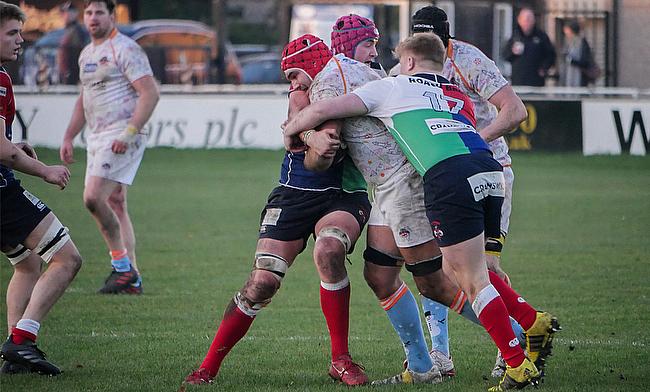 Hull Ionians will be looking to stay in control of the National Two North promotion battle when they come up against Sedgley Park on Saturday afternoon.

The I’s have recovered from a dip in form and three successive victories leaves Martyn Wood’s men five points clear at summit. However, this weekend, they face a rejuvenated Sedgley Park side so the Yorkshire club will be keen to maintain their momentum to ensure they stay in the driving seat.

Waiting to pounce if Hull slip up will be their fellow promotion rivals. Second-placed Chester face a tough visit to Wharfedale in Round 25 while Fylde go to South Leicester and Huddersfield take on Stourbridge.

Fifth-placed Otley, who can still play a major part in the race for a top two finish, go to Hinckley on Saturday while down at the bottom, it could be a huge weekend for Macclesfield and Peterborough Lions.

After their excellent win last time out, Macc have given themselves hope of avoiding the drop and a positive result against Tynedale would enhance their chances of evading the trapdoor. Meanwhile, Peterborough Lions could be relegated if results go against them in Round 25.

The Lions take on Preston Grasshoppers and their fate can only be sealed if Sheffield Tigers better their result, with the Yorkshire club travelling to Leicester Lions this weekend.

It has been a superb month for Hull Ionians. After a wobble in form towards the end of 2018 and the beginning of this year, the I’s have responded in the perfect manner. Two crucial wins over promotion rivals Fylde and Huddersfield, with a thumping victory against South Leicester sandwiched in-between, has left Martyn Wood’s side in a prime position to make an immediate return to National One.

National One – Round 24 Review: @MoseleyRugbyFC see off Loughborough to secure crucial win #Nat1

The Yorkshire club are now five points clear with six games to go and with none of their nearest challengers left to play, it is easy to say that this weekend’s clash with Sedgley Park could be their toughest hurdle between now and the end of the season. Sedge travel to Hull with a renewed confidence after some excellent recent wins, including a fine victory over Hinckley last time out. The Tigers’ will be keen to continue their resurgence in Round 25 and if they are to achieve that, they will have to become the first side to defeat Hull Ionians at Brantingham Park this tern.

A battling draw with Stourbridge followed by a disappointing defeat to Hinckley may have been seen as Chester ‘having a wobble’ in this title race. However, if there were any critics, Jan van Deventer’s side produced a sensational response as they thrashed South Leicester to get their promotion ambitions back on the straight and narrow.

The men from Hare Lane moved back up to second place and they are now two points clear of their fellow promotion chasers, but their credentials will be put to the test again when they visit Wharfedale on Saturday. Dale will be looking to bounce back in Round 25 as their five-match winning streak came to an end against Leicester Lions last weekend. The Greens are currently 10th in the table, with a game in hand, and with five of their remaining fixtures coming at the Avenue, Rob Baldwin and Jon Feeley will be hoping their side can end a very satisfying season in the top eight of National Two North.

Following their defeat to Hull Ionians, Fylde faced a powerful Stourbridge side in Round 24, but Warren Spragg’s squad completely outclassed the Midlands club last weekend. A sparkling eight-try display saw them breeze past Stour and now the men from Woodlands sit just two points outside the top two as we enter the business end of the campaign.

With promotion rivals Chester and Huddersfield to come, Fylde still have their fate in their own hands and they are just the latest top four side to face South Leicester. South come into this fixture having shipped 118 points against Hull Ionians and Chester over the last few weeks and with them also being embroiled in a relegation battle, a clash with Fylde is the last thing the men from Welford Road needed. South sit 11 points adrift of safety so a positive result in Round 25 could spark a survival challenge into life.

The last two weeks have been frustrating for Huddersfield and head coach Gareth Lewis. Successive defeats against Wharfedale and title rivals Hull Ionians has dented Field’s promotion hopes, but with a game in hand to come against Tynedale later this month, it is far from over for the men from Lockwood Park. The Yorkshire club are five points off second-placed Chester and they travel to the Midlands this weekend hoping to respond and get their top two aspirations back on track.

Stourbridge will be play host to Huddersfield and Neil Mitchell’s side will be aiming for a reaction after losing heavily to Fylde in Round 24. The Midlands club do currently have a long list of injuries, but this weekend, they will be keen to secure their first victory for exactly a month at Stourton Park. Six of their remaining seven games are against teams currently higher in the table than Stour, but they possess the quality to certainly finish a mixed season in a positive fashion.

We may sound like a broken record, but Otley are still on the periphery of the promotion battle. Last week, a superb first half from Charlie Maunder and Tom Casson’s side against Peterborough Lions helped them to a fourth win from their last five games and the Yorkshire club are just eight points behind second-placed Chester.

If they are to really sustain a challenge for a top two place, this weekend may be a turning point. Otley visit eighth-placed Hinckley and the Midlands club’s season has been based around their excellent home form. 10 of their 13 wins this season have come at Leicester Road and their away day woes continued in Round 24 as they were outmuscled by Sedgley Park. Director of Rugby George Chuter told the club website his side played their ‘worst first-half of the season’ against Sedge so he will be hoping home comforts produce the best out of his side once again.

It has been a wonderful return to National Two North for Preston Grasshoppers. After clinching promotion from North Premier, Paul Arnold’s side have performed superbly back in the fourth tier and their end of season flurry encapsulates the excellent campaign the Lancashire club have had. Hoppers are on a four-match winning run and the seventh placed side will be confident of adding to that tally when they take the trip to Peterborough Lions.

Head Coach @arnie_4 gives his reaction to Hoppers win vs Tynedale at the weekend pic.twitter.com/bW8k797sQz

While Preston have flourished following promotion last year, the same cannot be said for Peterborough Lions. The men from Bretton Woods are currently rock bottom of the division and their time at this level is all but over. The Lions are 25 points from safety with six games remaining so if results go against them this weekend, their fate could be sealed. All four of their wins have come at home and a fifth may just delay the unfortunate inevitability of relegation.

Tynedale’s three match winning streak came to a halt in Round 24 as Preston Grasshoppers produced a polished performance to see off Ben Woods’ side. Their loss at Lightfoot Green was only their second defeat of 2019 and the North-East outfit, who now sit in ninth place, will be eager to respond when they face Macclesfield on Saturday.

Tyne have won their last eight home games at Corbridge so the challenge facing Macc won’t be an easy one. However, Marshall Gadd’s men will come into this fixture on a high as an excellent performance against Sheffield Tigers last weekend has given the Blues a chance of escaping relegation. The Cheshire club are 15 points from safety with six games to go so there is still a lot of work to be done, but if Macc can get a result this weekend, a remarkable revival could be on the cards.

Leicester Lions displayed a cutting-edge last weekend as their attacking intent was rewarded against Wharfedale. Andy Key’s side ran in seven tries to claim a deserved home triumph and it means the Lions are now 20 points clear of the drop zone with six matches remaining.

It is extremely likely the Midlands club will be plying their trade in this division next term and Sheffield Tigers may also fall into that bracket, especially if they can defeat Leicester Lions this weekend. Jamie Broadley’s side have won just one of their last nine matches, but they still sit 11 points clear of trouble. The Tigers will know a couple of victories between now and the end April should see them over the line and an eighth triumph of the campaign on Saturday would be a welcome boost for the Yorkshire club.