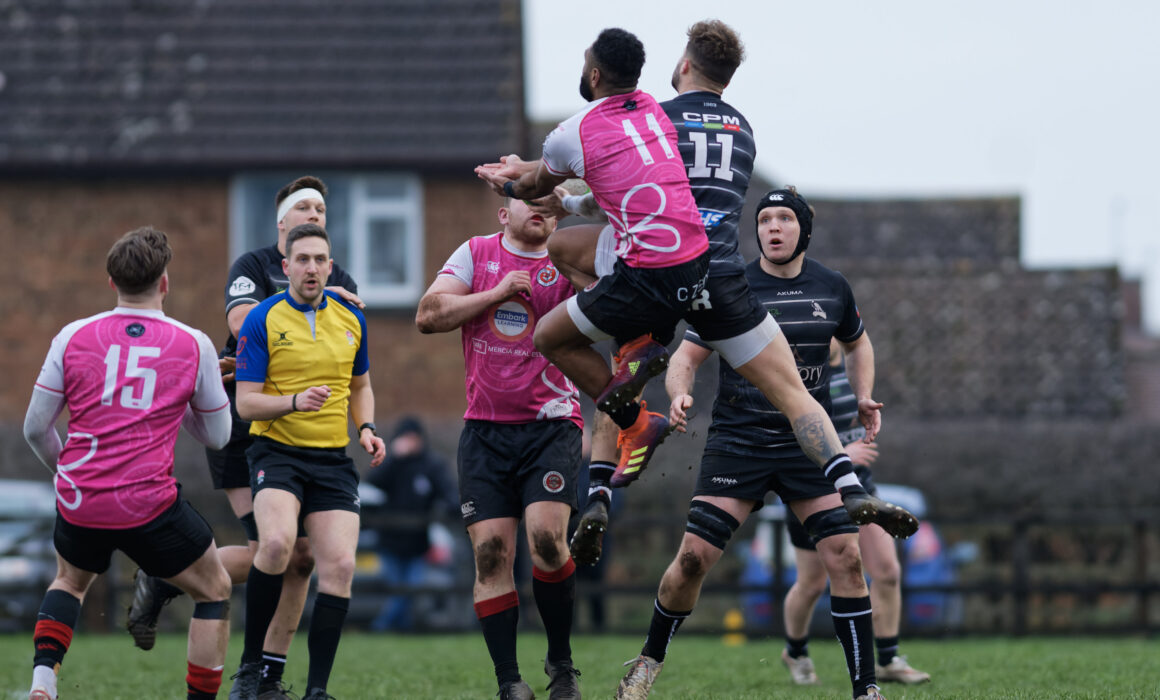 Birmingham Moseley and Leeds Tykes pull off excellent fightbacks as the bottom half of National One intensifies. Photo Credit: (Simon Cooper)

Rosslyn Park had their title credentials tested in Round 18, but they came from behind to secure a 28-20 win over Darlington Mowden Park.

Tries from Chris McTurk, Callum Mackenzie and Fred Lockwood gave DMP a 20-7 lead, after Charles Piper’s effort had put the hosts ahead.

With half-time approaching, Craig Holland’s score was the beginning of the Park revival and on 63 minutes, Hugo Ellis dotted down to put the table-toppers in front.

Henry Spencer’s score seven minutes from time then sealed the win for Kieran Power’s side, who now hold a nine-point lead at the summit.

Second-placed Caldy continued their excellent campaign with a 26-10 win over Blackheath whilst Sale FC stayed right on their heels as they ground out a 10-7 victory away at Plymouth Albion.

Cambridge and Cinderford played out an enthralling National One encounter at Volac Park, but it was the hosts who came away with a 27-21 win to enhance their own promotion bid. Joe Tarrant’s try for the Blood and Sand proved to be the difference as Cinderford fell to their sixth defeat from their last seven games.

Towards the bottom of the division, there were some potentially big results for Birmingham Moseley and Leeds Tykes who beat Chinnor and Rams RFC respectively.

In terms of Moseley, they sealed a 29-27 triumph away from home as a last-gasp penalty try stunned Chinnor in a thrilling contest.

A fiery encounter concluded with Chinnor’s Cameron Terry shown a second yellow card before Moseley snatched the win with the final act at Kingsey Road.

Despite seeing three players sent to the sin-bin throughout the afternoon, Chinnor looked to have done enough after scores from Elliot Chilvers, Will Ryan, Jason Worrall and Kieran Goss, but a second penalty try for the Midlands club stole the victory away from the hosts.

Tom Benjamin and Isaac McNulty went over for Moseley’s other tries and the bonus point triumph leaves them five points clear of the bottom three. As for Chinnor, this was another frustrating Saturday.

There was also late drama for Leeds Tykes as Charlie Venables kept his cool to slot over a penalty and seal a 25-22 victory after a superb fightback from the Yorkshire outfit.

Rams were 22-7 up at the interval thanks to Charles Robson, Tom Vooght, Max Hayman and Connor Hayhow before Leeds Tykes roared back as a Venables penalty was followed up by Matt Burke’s try.

Jake Brady had opened the scoring for Phil Davies’ side and it was another forward who levelled things up as Alex Pleasants dotted down six minutes from time.

Venables missed the resulting conversion, but made amends to land his penalty and secure the win for Leeds Tykes as the fight to avoid the drop intensifies.

Elsewhere, comebacks was also the theme at Taunton Titans as Bishop’s Stortford came from 19 points down to draw 29-29 at Veritas Park. Josh Stannard, James Ayrton and Alex Rayment all crossed in the final half an hour in Somerset.

Hull tightened their grip on top spot in National Two North as they secured an eighth win in a row by beating Chester 40-19.

Gary Pearce’s charges earned their bonus point with four minutes left to play with tries from Mike Adlard, Charlie Beech, Reece Dean and Ben Boothman, but the home side did keep in touch with the table-toppers for large periods of this contest.

Liam Reeve kicked four penalties and converted Josh Woods’ try to leave the deficit at 28-19 heading into the final 10 minutes, but Hull were able to close the door on proceedings with Adlard grabbing his second late on.

Sedgley Park also racked up a sizable victory as they breezed past Sheffield Tigers to clinch a 49-0 win at Park Lane.

The second-placed side once again had Matt Gallagher to thank as he ran in four of their eight tries in a dominant performance. Jacob Tansey grabbed a brace for the home side whilst Cameron Crampton and Will Lees also chipped in.

Sedge’s latest triumph keeps them five points off the top, but Fylde (3rd) are on their coattails after a 33-8 success away at Harrogate.

No stopping the league leaders!!!

Matt Garrod went over after 14 minutes and Ben O’Ryan and Matt Sturgess both touched down before half-time to help the visitors to a 19-3 lead.

Full-back Ben Turner continued the scoring for Fylde, but Harrogate managed to grab their only try of the afternoon through Ben Raubitschek.

However, the Lancashire club had the final say when Henry Hadfield scooted over to record Fylde’s fifth win from their last six games.

Stourbridge kept their title bid ticking over as they also scored half a century of points in their 52-26 victory over Tynedale. A superb first-half display helping Neil Mitchell’s side to back-to-back wins.

Elsewhere, Hull Ionians comfortably beat Huddersfield 33-3 at Lockwood Park, but it was a tighter affair for Loughborough Students who edged Luctonians 19-14 thanks to Mink Scharink’s second-half effort.

Also in National Two North, Wharfedale secured their first win of 2022 as they beat Bournville 30-18 in a pulsating encounter at The Avenue.

Henley had led 10-7 at the interval after Tom Emery’s converted try was backed up by the boot of Monty Bradbury.

But the league leaders responded and took the lead on 54 minutes when Brad Talbot cancelled out another penalty from Bradbury.

Alex Giltrow had gone over in the first period for Clifton, and it was his back-row colleague who helped the Lavender and Blacks over the line as Talbot crossed for his second seven minutes from time.

The only minor negative for Matt Salter’s side was their failure to secure a bonus point as they are now level with Esher at the summit after the second-placed side held on to a 34-31 win against Leicester Lions.

The hosts led by three points with a quarter of the game remaining at Molesey Road, but the Midlands side couldn’t find that crucial score in the final 20 minutes.

Crucially, Esher scored four tries, including a double from Theo Skoumbourdis and one apiece for James Chaumeton and Adam Bullett.

📺 The National League Rugby Review Show: Round 18@WMuggleton brings you the best tries and biggest moments from the weekend.

A brace from James Stubbs and scores via Will Ward and Alex Wilcockson did set up a tense finish, but Esher stood strong.

Redruth still have the leading duo in their sights after they put a difficult beginning to the year behind them by beating Hinckley 39-5.

A converted try from Richard Kevern, a drop-goal from Jack Oulton and a penalty from Will Trewin made it 13-5 at half-time.

Rory Vowles had gone over for Hinckley in the first period, but the Hornets didn’t trouble the scoreboard after the interval as further tries from Dean Bonds, Mark Grubb and Alex O’Meara (2) secured the win for the Reds.

There was also no mistake from Worthing Raiders who defeated Old Albanian 31-7, with Harlequins academy talent Cassius Cleaves scoring twice for the hosts.

Elsewhere, Guernsey Raiders made it successive wins in National Two South as they comprehensively beat Barnstaple 50-24 and Barnes were also in a relentless mood on Saturday as they dispatched Westcliff 52-10.

Also in the division, Charlie Reed’s late penalty saw Bury St Edmunds snatch a 20-19 win from Dings Crusaders and Aiden Moss and Dwayne Corcoran were both at the double as Canterbury beat Rochford Hundred 46-17 at The Marine Travel Ground.