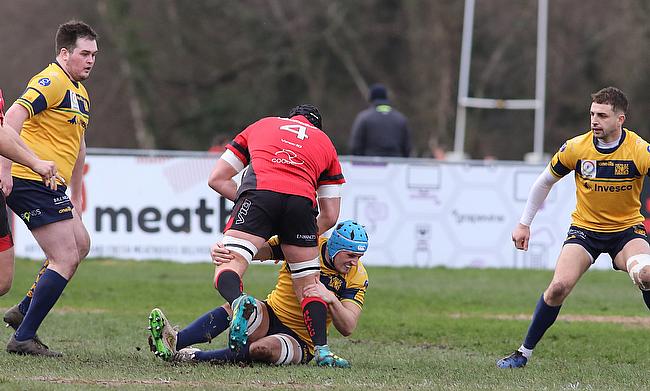 Tonbridge Juddians, Henley Hawks and Taunton Titans all had to battle to kick off the New Year with victories in National Two South. (Photo Credit: Steve Karpa)

TJs eventually came away from Bristol with a win after overcoming a stubborn Old Redcliffians outfit whilst second-placed Henley Hawks edged past Bournemouth on the south coast.

Taunton Titans experienced a see-saw of a contest with Worthing Raiders in Round 17, but Tony Yapp’s side clinched a crucial bonus-point triumph ahead of back-to-back fixtures against rivals Henley and Tonbridge Juddians.

January could prove to be a decisive month in the promotion race whilst the fight for survival is also simmering nicely.

Bournemouth and Sutton & Epsom both clinched bonus-points in defeat with the latter losing to Old Albanian.

Only eight points now separate the bottom five clubs whilst elsewhere in the division, Redruth moved up to fourth with a win over Barnes, Leicester Lions thumped Westcliff and both Bury St Edmunds and Dings Crusaders left it late to secure excellent victories over Clifton and Esher, respectively.

Tonbridge Juddians secured their sixth straight victory, but they had to battle hard to see off Old Redcliffians in Round 17.

The league leaders actually found themselves 3-0 behind at half-time following Ashley Groves’ penalty, but TJs showcased their cutting edge after the interval at Scotland Lane.

Reds go close with a catch and drive and switch but TJs keep them out. Just. Penalty follows to their left corner. But TJs spoil it. And then play mad ball on own line – thankfully the whistle blows. 10-21 Phew

Finlay Coxon-Smith scored twice in three minutes to give the visitors the lead, however, Old Reds narrowed their advantage to four points when Dan Fry dotted down just after the hour.

Heading into the final 10 minutes, Rory McHugh made it more comfortable for TJs when he went over and the table toppers were able to negotiate the latter stages of this contest to remain at the summit of National Two South.

Henley Hawks resumed their promotion challenge with a hard-fought victory over bottom of the table Bournemouth.

The Lions, who once again picked up another vital point in their survival bid, raced into a 10-0 lead thanks to Adam Higgins’s score and five points from the ever-present Grant Hancox.

Henley fought back before the break following a penalty try and Ewan Fenley’s effort, but they fell behind once again after the interval as Ben Meaden scooted over.

The Hawks were able to muster up another response as Fenley dotted down before Reuben Norville crossed the whitewash to put Henley 26-17 up.

Hancox landed another penalty on 65 minutes to keep Bournemouth in touch, but despite working their way into threatening positions, the hosts couldn’t snatch the win as Henley held on.

Taunton Titans’ pursuit of a top two spot continues as they eventually sealed a bonus-point win over Worthing Raiders.

In this topsy-turvy affair, Tony Yapp’s men were able to seal the win after Worthing had had a player sent off and the victory for Taunton leaves them four points behind second-placed Henley Hawks.

Nick Mason, Greg Kitson, Dan Lee and Ben Oliphant-Thompson all went over for the hosts in a pulsating first period in which Worthing scored on three occasions through Will Beer, Jonathan Whittall and Tom Gwyther.

The latest in a long line of cracking contests between @tauntonrfc and @WorthingRFC!https://t.co/Kyzxc9Ndn7

Worthing’s Henry Anscombe landed a penalty to get the scoring underway in the second half, but Jack Arnott’s try kept Taunton ahead.

The Raiders mustered up yet another reaction via Johnathan Dawe to cut the Titians’ lead to just one point, but their hopes of leaving Somerset with a victory were dented when the centre received a red-card for a dangerous ‘no arms’ high tackle.

Taunton then settled any nerves there may have been at Towergate Stadium when the prolific Isaac Dalton dotted down and his try was enough to secure the win.

Redruth continued their excellent recent form to move up to fourth place in National Two South after they beat Barnes.

The Reds took the lead through a Fraser Honey penalty, but Barnes hit back as Elliot Simmons went over.

Jack Oulton’s converted try and another kick from Honey helped Redruth into a 13-10 half-time lead, however, the hosts answered once again.

Conor Harbison had gone over in the first period for Barnes and his scrum-half, Josh Davies, made it 17-13 on 44 minutes.

But from this point on, the home side had no response to Redruth as Richard Brown’s try was followed by a hat-trick of Honey penalties as the visitors secured their fifth league win on the spin.

Tries from Sam Harrison and Bentley Halpin saw Clifton lead 17-7 after 25 minutes, with Tanner Lightfoot going over for the hosts.

Bury were able to cut Clifton’s advantage to three points as Dan Walsh dotted down before the break, but two quick-fire yellow cards shown to Yasin Browne and Kieran Meikle allowed the away side to edge further in front.

Luke Stratford immediately capitalised on the two-man advantage to make it 22-14, but that was all the damage Clifton could muster up as Bury hit back.

A penalty try on the hour made it a one point game and on 78 minutes, the decisive moment of the match occurred as Drury-Hawkins kept his cool to clinch the victory for Bury.

The Lions lost to both Worthing Raiders and Henley Hawks before the Christmas break, but managed to get their season back on track in some style.

Greg Bannister opened the scoring for Westcliff with a penalty, but following this, the hosts really hit their straps at TMDP Park.

Winger Devon Constant got the ball rolling before James Whitcombe, Jamel Hamilton, Ed Sumpter, Harry Glynn and Kaz Henderson all crossed in the first half.

Oli Tapscott recorded the Lions’ only try in the second period whilst Westcliff scored the final points of the afternoon through centre Jake Campey.

Dings Crusaders had to come from behind to beat Esher in a breathless contest at Shaftesbury Park, despite a clinical first half display from the hosts.

However, three unanswered scores from Jack Walsh, James Booth and Ben Davies flipped the game on its head as Esher moved 33-31 ahead.

But in the final seven minutes, the Crusaders showed their character and resilience as Sam Graham and Tom Hargan both scored to clinch a pulsating win for the Bristol outfit.

Old Albanian scored eight tries against Sutton & Epsom as James Buckland and James Osborn’s side produced a scintillating second-half performance to begin the New Year on a positive note.

OAs, who entered this fixture on the back of four straight defeats, found themselves 17-8 down heading into half-time.

Andrew Ince, Aaron Phillip and Raynn Bruce had gone over for the hosts whilst Josh Hallett responded for the away side, but OAs’ second try just before the break proved to be their catalyst.

Alessandro Ricci darted over and after the restart, the visitors cut loose. Morgan Thompson scored a hat-trick to take his overall tally for the afternoon to 27 points whilst Alex Noot grabbed a brace before Nico Defeo and Hallett rounded off proceedings.

Matt Whitaker did score late on to secure a try-bonus-point for S&E, which could be crucial as they currently sit just three points from safety.