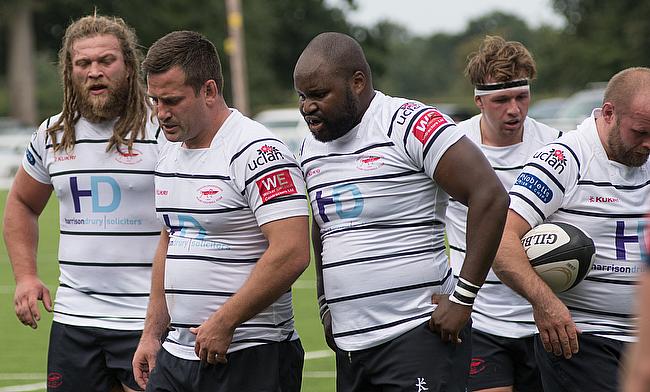 South Leicester and Leicester Lions as well as Preston Grasshoppers and Fylde meet in a blockbuster second round of National Two North action.

These two derby matches are the pick of the fixtures this weekend whilst there is also a local rivalry in Cheshire taking place as Macclesfield host Chester.

Elsewhere, we have an all-Yorkshire affair when Huddersfield go to Otley while a strong looking Stourbridge side travel to Sheffield Tigers, Hinckley visit Peterborough Lions, Wharfedale entertain Sedgley Park and Tynedale welcome Hull Ionians to Corbridge.

Local rivals Leicester Lions and South Leicester meet in Round Two of National Two North and it was the visitors who began the new season on a high. South comprehensively beat Macclesfield at Welford Road and now they take the short trip to their near neighbours as they aim for back to back victories at TMDP Park.

The last meeting between the two sides was a 25-25 draw in December 2017 and since then, the Lions have won just three times in 16 matches. Andy Key’s men started the new campaign with a defeat away at Stourbridge, but a derby day triumph would be the perfect morale booster after a tough opening day loss.

Just like last season, Stourbridge have flown out of the blocks. A 42-25 victory over Leicester Lions was an excellent start for Neil Mitchell’s side who maybe eyeing a top two finish this term after ending the last campaign in third spot. Over the last couple of years, Stour have failed to find the consistency to earn themselves a promotion place so successive wins to begin the new season would be the ideal start for the Midlands club.

They visit a Sheffield Tigers side that nearly got off to a winning start last weekend. Jamie Broadley’s men were moments away from toppling recently relegated Hull Ionians, but their Yorkshire rivals snatched the points at Brantingham Park. However, there will be many positives for the Tigers to take into another tough fixture this weekend as they aim to open their account for this season.

After battling it out alongside Tynedale for a place in the top two for a large chunk of last season, Hinckley would have been delighted with their victory over the North East club in Round One of the new campaign. George Chuter’s side were certainly one of the surprise packages in 2017/18, but now they are not an unknown entity anymore and could easily challenge towards the summit again this term.

To do that, they must find the consistency which eluded them in the second half of last season and a victory over newly promoted Peterborough Lions in Round Two would be a good start. The Lions found it tough on their National Two North debut against Wharfedale last Saturday, but they are at home once again this weekend so they will be hoping to write a new piece of club history on Saturday by securing their first ever win at this level.

Wharfedale got the new season underway with a tidy victory over Peterborough Lions last weekend. Dale travelled to Bretton Woods and controlled the majority of the contest to hand new Director of Rugby Rob Baldwin an opening day triumph. After avoiding the drop by the finest of margins last term, the Greens will be keen to stay clear of danger this time around and a first home win of the campaign would certainly boost their chances of steering clear of trouble.

However, their task this weekend will not be straightforward as last year’s runners-up Sedgley Park visit the Avenue. Matt Bebbington’s side battled to an away win over a strong Huddersfield outfit in Round One and are once again on the road this weekend. In the corresponding fixture last term, Sedge grinded out a result in Yorkshire and they will know they will be in for a similar fight this Saturday.

It seemed to be business as usual for Chester last weekend. A home fixture at Hare Lane resulted in a victory for Jan Van Denventer’s side against National Two North new boys Preston Grasshoppers and now they find themselves with a Cheshire derby to look forward to this weekend when they take the short trip to Macclesfield.

We may sound like a broken record, but Chester will be keen to improve their results away from home after just three wins on the road last term and they visit a Macc side desperate for an improvement in Round Two. The Blues were outclassed by South Leicester last time out so Head Coach Marshall Gadd will be aiming for a response from his players in front of the home crowd at Priory Park.

Paul Arnold will welcome is old club Fylde to Lightfoot Green this weekend as Preston Grasshoppers host their first game back in National Two North. Arnold spent seven years at Woodlands before joining Hoppers at the beginning of last season, but despite his close connection with Fylde, he will be keen to inflict a defeat on his former side this weekend.

Preston battled hard, but fell to a defeat away at Chester in Round One while Fylde, who were relegated from National One last season, began life in the fourth tier with a comfortable victory over Otley last Saturday. Warren Spragg’s side got the job done inside the first 40 minutes and they will be aiming to be clinical once again against their Lancashire counterparts in Round Two.

As the saying goes in sport, a win is a win and that may well have been the feeling for Hull Ionians last weekend. After relegation from National One in April, the I’s were staring at a defeat on their return to National Two North, but a late Sam Wilson score snatched an opening day victory for the Yorkshire club.

Hull will be hoping to put in an improved performance and they may need to when they visit Tynedale in Round Two. The North East club were beaten by Hinckley last weekend, but there were positives for Ben Woods to take from their defeat in the Midlands. Tyne, who finished fourth in 2017/18, are now back at Corbridge where they lost just twice last season and a victory over one of the promotion contenders this weekend would be an excellent response to their Round One loss.

Huddersfield produced a battling display against Sedgley Park in Round One, but ultimately, it wasn’t enough as Gareth Lewis’ side fell to a narrow defeat at Lockwood Park. Field have strengthened in the summer and that was clear to see against Sedge so they will be keen to show their qualities once again when they take on Otley this Saturday.

Otley began the season with a tricky trip to promotion candidates Fylde and a disappointing first half display cost Tom Casson and Jack Maunder’s side. Trailing 24-0 at the break, the men from Cross Green were much improved after the interval and in the end, they could have snatched a bonus-point. They will be hoping to begin this fixture with Huddersfield on the front foot as Otley aim for their first victory of the new campaign.