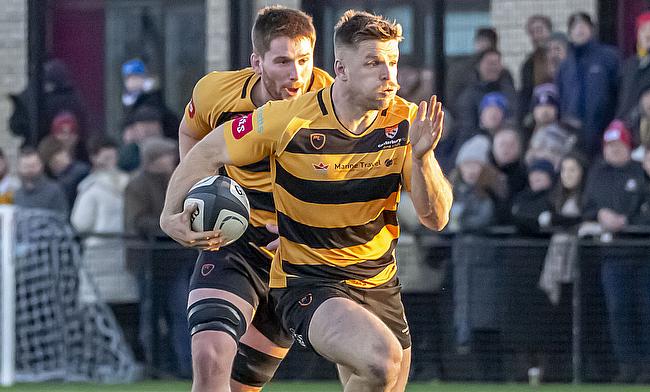 Even though the bad weather put paid to 17 games across National League Rugby, some brilliant fightbacks and huge results meant for an entertaining weekend. (Photo Credit: Phillipa Hilton)

The visitors – who began the day 10 points behind Sale with two games in hand – opened the scoring via Kwaku Asideu but the home side hit back through Cal Ford.

Mark Dixon’s try gave Sale the lead on 17 minutes before Asideu swapped scores with Oskar Hirskyji-Douglas to leave Jonathan Keep’s charges in front at the break.

However, the Blood and Sand took control of the scoreboard in the second period with the superb Asideu completing his hat-trick before Ben Brownlie bagged a brace.

The win for Richie Williams’ side keeps them third in the table but they have now halved Sale’s lead at the summit.

Rosslyn Park (4th) may feel like they are back in the promotion conversation after a 13-10 win against Bishop’s Stortford. Kieran Powers’ troops are eight points behind Sale thanks to a victory which included a double for Charlie Piper.

The only other fixture which survived the weather in the third tier was at Molesey Road where Esher continued their surge up the standings with a 34-24 success over Plymouth Albion.

Ben Atkins, Andy Hamilton, Pierre Thompson and Fergus Donnelly all crossed for the EEEs who have now picked up six wins from their last eight matches.

After Sedgley Park’s meeting with Hull Ionians was postponed, Fylde were able to move to the top of National Two North as they capitalised on Blaydon’s indiscipline to record a 31-12 victory.

The North East side were shown three yellow cards in the second half and were punished by the promotion challengers as Greg Smith, Scott Rawlings and Connor Wilkinson all profited.

Fylde had been pegged back twice before the break as tries from David Fairbrother and Jordan Dorrington were cancelled out by Zach Thompson and Charles Smith but the Lancashire club were able to come away with a win which leaves them two points clear at the summit.

Chester are up to fourth in the standings as Liam Reeve won the battle of the fly halves against Sheffield Tigers’ Mark Ireland to guide his side to a 23-17 triumph while in their quest to distance themselves from the bottom two, Preston Grasshoppers had to settle for a losing bonus point as they fell to a 24-18 loss against Sheffield at Lightfoot Green.

Canterbury fought back from 19 points down to claim a crucial 43-33 win over Worthing Raiders to move 10 points clear of the relegation places.

The City Men fell behind at The Marine Travel Ground after Cameron Macmillan and Sam Sterling’s efforts were wiped out by first-half scores from Fraser Bruce, Curtis Barnes and Dan Sargent.

Another for Barnes and Sargent pushed the visitors further ahead but a thrilling fightback from Canterbury saw the game completely turnaround.

Three tries in seven minutes from Will Young, Tyler Oliver and Frank Reynolds hauled the hosts back into the contest before Frank Morgan and Oliver dotted down late on to complete a remarkable and possibly pivotal victory for Matt Corker’s chargers.

Guernsey Raiders also came from behind to defeat Tonbridge Juddians 25-14 at Footes Lane thanks to second-half efforts from Jacob Weeding Pinkney, Tom Ceillam and Callum Roberts.

Gareth Collins’ side have only suffered one defeat all term – which came against Dings back in October – and it looked for all the world like the Bristol outfit had the better of the Lions once again.

Anthony Welling, Harry Tovey, Matt Smith and Ciaran Donoghue all went over to give the Crusaders a 24-3 lead at the interval but the Midlands club roared back in the second half.

Daniel Martin and Devon Constant added to Alex Wilcockson’s earlier try to make it 24-21, and the boot of the excellent Young pinged over two penalties in the final 15 minutes to clinch the win for Leicester Lions.

Their lead at the top of the table is now nine points after Clifton (2nd) secured a 35-19 bonus point success away at Exeter University, with Zac Ward scoring twice.

Down towards the other end of the division, Hornets produced a ruthless first-half display to defeat Stourbridge 47-26 at The Nest. The hosts found themselves 35-7 up at the break in Weston-super-Mare and this result leaves them seven points clear of the drop.