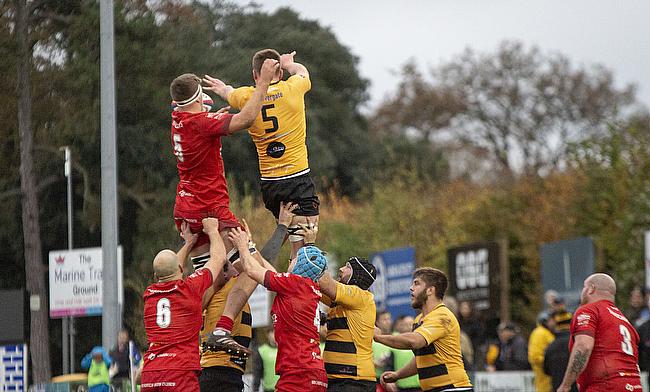 National One leaders Cinderford will be under the microscope again in Round 12 when they host Sale FC whilst the top four collide in National Two South. Photo Credit: (Phillipa Hilton)

Only two points separate table-toppers Cinderford and the chasing pack in National One after Paul Morris’ side suffered their second defeat in three matches. The Foresters’ impressive eight-game unbeaten run was halted by Rosslyn Park in Round Nine and last Saturday’s defeat to another title rival in the form of Rams RFC means the Gloucestershire outfit are sitting less comfortably at the summit.

Their promotion credentials will be tested at Dockham Road on Saturday when they host fourth-placed Sale FC. Jonathan Keep’s charges are enjoying their campaign so far and head to the West Country having won six of their last seven games, including back-to-back away successes against Darlington Mowden Park and the aforementioned Rams. The North West outfit will also be feeling refreshed having had last week off, so they will be keen to resume their season in a positive fashion as they aim to keep themselves in the mix with the frontrunners.

Since Rosslyn Park fell to their first defeat of the season against Rams at the beginning of October, Kieran Power’s side have reignited their promotion hopes. The momentum seems to be with the men from The Rock as they head into Round 12 on the back of four straight wins and they are now on the coattails of Cinderford.

Last Friday night, they were rampant against London rivals Blackheath and whilst confidence may be coursing through Park’s veins, they travel to the in-form side in National One this weekend. Caldy might be 11 points behind their opponents, but they come into this clash unbeaten in eight games so the job Gareth Davies and his coaching staff are doing at Paton Field cannot be underestimated. A hard-fought victory over Taunton Titans kept the Wirral side marching up the table and a victory over one of the title contenders would really make people stand up and take notice of Caldy if they weren’t attracting attention already…

Our focus now turns to a battle in the bottom three as Plymouth Albion travel to The Slade to take on Tonbridge Juddians. Despite slipping to a 17-0 defeat against Cambridge in Round 11, Albion are in relatively decent form. Yes, they were out-muscled by the Blood and Sand last week, but Damian Welch’s side have won three of their last five games and have picked up successive victories on the road.

With that in mind, Plymouth will be hoping they can recapture their upturn in fortunes on Saturday against a TJs outfit who haven’t won since September. In fact, Peter Dankert’s side have only triumphed on one occasion since their promotion to tier three, but their position in the table arguably belies their performances. The club’s website described last week’s narrow 30-24 defeat to Darlington Mowden Park as a case of ‘what might have been’ as they once again found themselves on the wrong end of a tight scoreline. With the division’s bottom club now sitting eight points from safety, they will be desperate to stop the rot heading into December.

Elsewhere in National One, third-placed Rams, fresh from their win over Cinderford, travel to Birmingham Moseley and Chinnor host Taunton Titans for the first time in three years. Also this weekend, Cambridge will be aiming to extend their unbeaten run to eight matches when they welcome Leeds Tykes to Volac Park and Blackheath entertain Bishop’s Stortford.

Stourbridge’s grip at the top of National Two North tightened ever so slightly last weekend. The Midlands club continued their perfect record this term as they claimed a 10th straight victory against local rivals Bournville, but with fellow promotion candidates Sedgley Park losing to Hull, it means Neil Mitchell’s side now have a four-point gap at the summit.

Whilst this isn’t astronomical, it is a lead that they can carry into December if they can stretch their winning run against Blaydon on Saturday. On paper, everything points to another Stour success given their North East opponents are bottom of the table and have only picked one victory all season, but Keith Laughlin’s side will bring grit and determination to Stourton Park as they look to pull off one of the shocks of the campaign so far.

Hull, who are now the nearest challengers to Stourbridge, beat title candidates Sedgley Park last Saturday and they are currently flourishing in this National Two North campaign. Gary Pearce’s side are clearly a different animal this term and having lost to some of the other top teams in the division before last weekend, their triumph over Sedge is a notable one.

Now the momentum is with the Yorkshire club and they will want to continue their eye-catching form against Bournville in Round 12. Last weekend, Mitch McGahan’s men slipped into the bottom half of the table after falling to a seventh straight defeat so they will be hoping rediscover their early season form as they go in search of a first victory in just over two months.

Will Fylde’s excellent sequence of results continue on Saturday? Well, the third-placed side have been unstoppable over the last month and after a hard-fought win over Hull Ionians last time out, they head into this weekend’s meeting with Luctonians with four straight victories under their belt.

The Lancashire club are only six points behind Stourbridge – albeit the league leaders have a game in hand – but they really do seem to be in the groove at the moment. Hoping to upset the applecart will be Luctonians who have lifted themselves out of a mini malaise in recent weeks. Ryan Watkins’ troops have won their last two matches having only triumphed in one of their previous eight games and in front of a home ground at Mortimer Park, the Herefordshire outfit will be keen to continue their upturn in form.

Sedgley Park’s trip to Chester is National Two North’s Featured Game on The National League Rugby Review Show and for good reason too. Damaging back-to-back defeats against fellow promotion hopefuls Stourbridge and Hull leave the Tigers in fourth-place and six points off the top so they will be desperate to return to winning ways at Hare Lane.

Despite temperatures dropping around the country as November turns into December, it does not seem to have cooled the heat surrounding the National Two South title race. The top four sides are all in action against one another in Round 12 and we begin with the Key Game on The National League Rugby Review Show.

Redruth (1st) host Worthing Raiders (4th) and the league leaders made sure they didn’t squander any points at Canterbury last time out. It was far from straightforward for Nigel Hambly’s men in Kent, but they extended their unbeaten run to three matches to stay on top of the pile by virtue of ‘Games Won.’

After sweeping aside almost everyone they faced in the opening seven rounds, Worthing’s early season optimism is slowly fading into the background. The Sussex club enter the final weekend of the month with three defeats from their last four matches and having been the hunted for large parts of this campaign, the Raiders are now the hunters. They travel to Cornwall four points behind Redruth and with the table-toppers also having a game in hand, it feels like Worthing may need to come away from The Recreation Ground with a positive outcome to breathe new life into their promotion bid.

The second mouth-watering clash of the weekend sees Esher (2nd) welcome Guernsey Raiders (4th) to Molesey Road. The hosts for this particular encounter have mustered up five straight wins and just one defeat in their last seven matches means Peter Winterbottom’s side are level on points with Redruth as we approach the final stint before the Christmas break.

Last week, backs coach Neil Hallett told National League Rugby that Esher “know what they want to achieve” this term, with promotion very much on their radar, but do Guernsey have similar ambitions? Well, the Channel Islanders would probably dismiss that claim given the Raiders only returned to this level this season but given they are only six points off the top, a victory in Surrey might cause the hierarchy at Footes Lane to reassess their targets. Also one thing to note, Kiwi-double act Malcolm Barnes and Meg Jones will be taking of the team as Director of Rugby Jordan Reynolds is in Covid isolation.

We could move away from the title race narrative to conclude this preview, but considering fifth-placed Clifton are only seven points behind Redruth, it seems like the Lavender and Blacks may profit on a weekend where their rivals will be slugging it out. Obviously, that all depends on whether Matt Salter’s side can stretch their winning run to three matches when they host Canterbury on Saturday.

It would certainly create a new sense of belief for the Bristol club, given they have lost to a couple of their fellow promotion contenders in recent times, but they will be acutely aware of how close Canterbury pushed Redruth in Round 11. The City Men had Covid and injury troubles leading into last week but still produced a gutsy display to earn a bonus point. That same desire and endeavour might be worth its weight in gold if Matt Corker’s men can showcase similar attributes at Station Road.

Also across National Two South on this final weekend of November, sixth face seventh as Old Albanian host an in-form Leicester Lions whilst another side playing with confidence – Henley Hawks – take on Dings Crusaders.

Elsewhere, Bury St Edmunds travel to bottom of the table Westcliff, Barnes host Barnstaple and Hinckley, who defeated Worthing last weekend, are back in the Midlands to entertain Rochford Hundred.