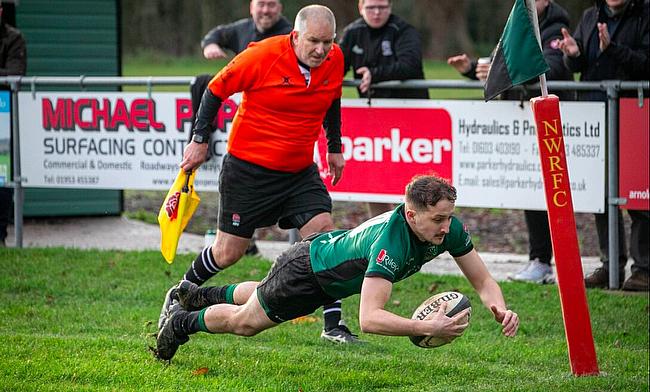 North Walsham’s win in National Two East has edged them closer to safety while Chinnor, Esher, Huddersfield and Barnstaple built on a solid start to 2023. (Photo Credit: Hywel Jones)

Esher’s superb run of recent form continued in Round 16 as they secured a 30-24 victory over relegation rivals Leeds Tykes to move seven points clear of the bottom three.

The EEEs have now won five of their last seven matches but Peter Winterbottom’s troops had to battle back from 12 points down in this contest.

Leeds Tykes scored tries through Kieran Davies, Rhys Williams, Alex Pleasants and Jacob Mounsey to give them a 24-12 advantage at the break, with Sam Bullock and Ben Fitzgerald replying for Esher.

But the hosts were unable to add to the scoreboard after the interval as two Sam Morley penalties and tries via Andy Hamilton and Ben Atkins made sure the visitors maintained their upward trajectory.

The Tykes had to settle for two bonus points from their latest defeat – which leaves them eight points from safety with a game in hand – while bottom-of-the-table Hull also concluded the weekend with a try bonus-point after a spirited fightback in a 38-30 loss to Rosslyn Park.

Fellow bottom three side Taunton Titans followed suit as a performance full of passion and determination earned them a point against table-toppers Sale FC. The league leaders were able to depart Somerset with a 19-14 victory but their failure to pick up a maximum allowed Rams RFC to close the gap to just three points at the summit of National One.

The second-placed side beat Bishop’s Stortford 26-14 in an ill-disciplined affair at Old Bath in which the visitors received five yellow cards over the course of the afternoon.

Cambridge (3rd) were also able to nudge themselves closer to top spot following a fairly comprehensive 34-15 victory against Darlington Mowden Park. The result means the Blood and Sand are now 10 points behind Sale FC with two games in hand and also, Richie Williams’ side travel to the league leaders this coming weekend.

Elsewhere, Chinnor’s early transformation under new Director of Rugby Nick Easter continued thanks to an excellent 37-29 win away at Birmingham Moseley.

After beating Rosslyn Park last week, the Black and Whites backed up that victory in the Midlands – with prop Josh McNulty claiming a hat-trick – while Plymouth Albion edged past Cinderford 17-10 in front of a crowd of nearly 1,300 at Brickfields.

Fylde kept their pursuit of the National Two North title on course but they were made to display all of their promotion credentials as they clinched a 22-15 victory over third-placed Hull Ionians.

Tries from Cameron Burnhill and Lewis Minikin saw Fylde pegged back before the break after they had led through Cole Potts’ try.

Five minutes after the restart, James Thompson scored Hull Ionians’ third try but Fylde controlled the scoreboard for the rest of the half as a second for Potts and Connor Wilkinson’s effort clinched the victory.

The Lancashire club’s 13th triumph of the campaign was without a bonus point which allowed league leaders Sedgley Park to shuffle three points clear at the summit, a 39-7 victory over Harrogate extending their winning streak to 14 successive matches.

The Tigers took advantage of three yellow cards which were dished out to the visitors and they now head into this coming weekend’s meeting with Hull Ionians with their unbeaten record still intact.

The loss for Harrogate means they are 11 points from safety at the wrong end of the table while Huddersfield were able to distance themselves further away from danger following a 19-13 success against Preston Grasshoppers, who had No.8 Scott Richardson sent off in the first period.

Fly-half Will Milner kicked 14 points for Gareth Lewis’ men – who are 13 points clear of the bottom two – while this setback for Preston leaves them one place above the trapdoor having played a game more than rivals.

Also across National Two North in Round 16, a brace from Michael Byrne helped Chester to a narrow 10-7 win away at Sheffield, Jake Rodgers inspired Tynedale to an excellent 25-10 victory over Rotherham Titans and Wharfedale halted a run of four straight defeats by seeing off bottom of the division Blaydon 22-3. Sheffield Tigers’ fixture with Otley was postponed due to the wet weather conditions.

The victory for the Norfolk outfit was made even sweeter by the fact they were the only side in the bottom five to collect points in Round 16.

Max Otis scored a first-half try for the hosts while Matt Hodgson kicked eight points to open up a 13-7 lead.

Otis, who had replaced centre George Loose after just four minutes, dotted down again but just after the hour, Guernsey’s Hugo Culverhouse added to Tom Ceillam’s opening score to cut the lead to eight.

However, the Vikings were able to repel waves and waves of Guernsey pressure to seal back-to-back home wins which leaves them five points from safety with a game in hand.

📺 The National League Rugby Review Show: Round 16@WMuggleton hosts from @TJRFC and brings you all the highs and lows from the weekend…

As mentioned, none of North Walsham’s rivals were able to add to their points tally for the season –  including Canterbury – who were beaten 40-12 by league leaders Blackheath.

Fly-half Tom Ffitch was instrumental in the latest win for the table-toppers and ‘Club’ are now nine points clear at the summit after Old Albanian were beaten 31-5 away at Tonbridge Juddians.

That specific result allowed Dorking to climb into second following a comfortable 29-0 success against Sevenoaks while Worthing Raiders moved up to third in the standings after hammering Rochford Hundred 68-3.

Winger Curtis Barnes helped himself to four of their 10 tries while Louis Ellis was the star for Barnes (4th) as he kicked 16 points in their 31-21 triumph over Henley Hawks.

Barnstaple maintained their recent improvement in results and landed a blow on one of their relegation rivals as they secured a 29-3 victory over Newport (Salop).

Will Topps’ try in response to Jacob Leonard’s penalty gave Barnstaple a 7-3 lead at half-time.

But the Chiefs found their groove after the break as tries from Brandon Moore and Ashlee Crouch pulled them clear at Pottington Road.

And two scores in the final 10 minutes via Moore and Dominic Robson clinched a third win from their last four games for Barum. The result means they have moved four points clear of the bottom two with a game in hand while Newport remain outside the relegation places but only by virtue of ‘Games Won’.

Bournville – who are one of the teams in the drop zone – are level on points with Newport after picking up a bonus point in a 41-29 loss at home to Dings Crusaders (4th) while another side scrapping towards the wrong end of the division – Hornets – scored two tries in the final four minutes to collect a losing bonus point from their 24-17 defeat at Loughborough Students.

At the right end of the table, Leicester Lions took full of advantage of three yellow cards shown to Luctonians in the final 15 minutes to record a 23-3 victory. The latest success for Gareth Collins’ charges was their 10th in a row and they remain 10 points clear of second-placed Clifton who beat Bristol rivals Old Redcliffians 24-15 at Station Road.

Redruth are up to third in the standings after beating the 14-men of Hinckley 24-5, with Alex Salt being sent off for the Midlands side, while elsewhere Zak Wimbush scored two of Exeter University’s nine tries as they defeated Stourbridge 59-15 away from home.