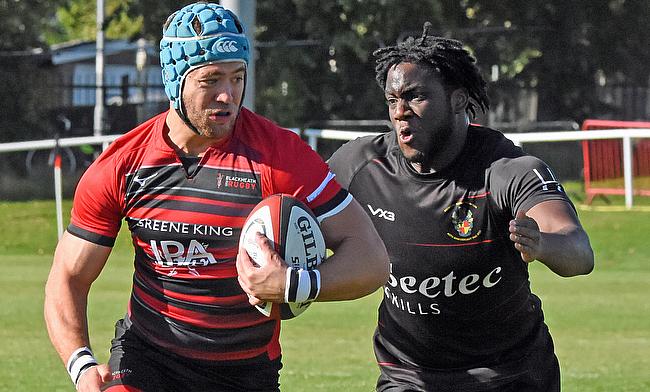 We are poised for an interesting weekend at the bottom of National One and National Two North while the battle for promotion rages on in the East and West. Photo Credit: (Andy Wansbury)

With Fylde losing to Sedgley Park in Round Nine, Seb Reynolds’ Rams RFC are the only club across National League Rugby to have picked up every point available to them so far this season. After scoring six tries en route to their ninth successive bonus-point victory over Leeds Tykes, the Berkshire outfit are now targeting a 10th win in a row.

If Rams were to achieve this feat, they would match their club record from 2006-07 and also stay on top of the table heading into the second ‘rest week’ of the campaign. Their opponents on Saturday, Plymouth Albion, will be looking to make it an uncomfortable afternoon for the league leaders. The men from Brickfields returned to winning ways last Saturday and currently occupy seventh spot in the standings. Albion have shown this term they have the tools to cause teams problems so can they upset the applecart at Old Bath Road?

🚨 Here is this weekend's Player of the Week from Round 9 in National 1: @AlbionRFC's Ramaz Rukhadze #Nat1 pic.twitter.com/f9F40rdCK1

Cambridge will certainly be hoping so as the second-placed side continue to keep Rams in their sights. The Blood and Sand are four points adrift and visit Birmingham Moseley in Round 10 while it will be an interesting duel at Silver Leys when an in-form Bishop’s Stortford (5th) entertain Sale FC (3rd).

Between that pair in the standings are Rosslyn Park who host Leeds Tykes while elsewhere, Cinderford travel to bottom of the table Hull – who are still searching for their first win of the season – as are Esher, who visit fellow bottom three side Chinnor in a big clash at Kingsey Road.

Joel Unsworth has led Preston Grasshoppers to two victories this season, both at Lightfoot Green and both against teams around them in the National Two North table. The Lancashire club sit one place and two points above the dreaded dotted line but have the chance to possibly create a cushion for themselves when they host bottom-of-the-league Harrogate this weekend.

The Yorkshire club have lost their past four games but their sole victory this term did come against Huddersfield who are one of the other sides currently in the bottom three. On that occasion, Harrogate won away from home and they will be keen to repeat that feat on Saturday as a win could move them to within three points of safety.

Huddersfield and Blaydon will be keeping a close eye on proceedings in Preston as both won’t want to lose touch with the Hoppers. That will be easier said than done as Field face the daunting prospect of taking on promotion-chasing Fylde (2nd) in Round 10 while Blaydon host Otley at Crowtrees.

At the summit, Sedgley Park dislodged Fylde from pole position last week after victory over their title rivals and Scott Barrow’s side will be looking to stay on top of the pile when they come up against Tynedale. Also across National Two North, two sides who are going well meet at Brantingham Park when Hull Ionians entertain Chester while Rotherham Titans welcome Sheffield Tigers to Clifton Lane and Wharfedale have Sheffield as their guests.

We are about to reach the second ‘rest week’ of the campaign and quite frankly, we are still none the wiser when it comes to the battle for promotion in National Two East. Seven points separates first and eighth place and four of the top five sides clash in Round 10. Blackheath – who sit in first spot- face an in-form Tonbridge Juddians (4th) while Henley Hawks (5th) entertain second-placed Dorking in The National League Rugby Review Show’s Key Game.

Before the start of the term, if you had told a Dorking supporter their side would be in sight of the summit in the middle of November, some may not have believed you. Armand Roux’s charges returned to level four this season but they are just three points behind league leaders Blackheath as things stand. Granted, ‘Club’ do have a game in hand over the rest of the field but the Red and Whites have done superbly to maintain the pace towards the top of this congested table.

As for Henley, they are five points off Blackheath and may admit they need to be a tad more consistent if they are to put down a marker for a possible title challenge. Saying this, the Hawks will be bouncing into Dry Leas on Saturday following their last-gasp win over Worthing Raiders in Round Nine so can their buoyancy filter into a winning performance against a Dorking outfit who have tasted defeat on just two occasions so far?

Sandwiched in-between this quartet of clubs are Barnes (3rd) who travel to Westcliff in Round 10 while sixth-placed Old Albanian play host to Rochford Hundred.

Elsewhere, Bury St Edmunds will be targeting a fourth win on the spin when they entertain Canterbury, Worthing Raiders go to North Walsham and Guernsey Raiders take on Sevenoaks with the latter aiming to leapfrog their hosts and jump out of the bottom three.

Leicester Lions will hope that Redruth’s red-hot form fizzles out in Round 10 as Nigel Hambly’s troops are the latest to test the title credentials of the Midlands club. The Lions sit on top of the tree and have been superb to watch this term, but the only side to defeat Gareth Collins’ men so far were second-placed Dings Crusaders.

That is why the visit of Redruth (3rd) is intriguing especially when you factor in the away side are only four points off the summit and have manoeuvred themselves into this position thanks to a run of six wins from their past seven games. The two teams last met on the final weekend of last season when The Reds were still in with a shout of promotion. The Lions did put a stop to that and you get the feeling both of these clubs will be there or thereabouts when April comes around again regardless of Saturday’s outcome.

The aforementioned Dings will be checking the result from TMDP Park once they clock off at Shaftesbury Park. It won’t be an easy afternoon for the Crusaders though, as they host sixth-placed Exeter University while Clifton (4th) go to Barnstaple and Hinckley (5th) travel to Newport (Salop).
Also across the division, Luctonians will be aiming for a third consecutive win when they entertain Hornets, Loughborough Students go to winless Bournville and there is a crucial meeting at Scotland Lane as Old Redcliffians – who are hovering above the relegation zone – take on Stourbridge, who are currently five points from safety.