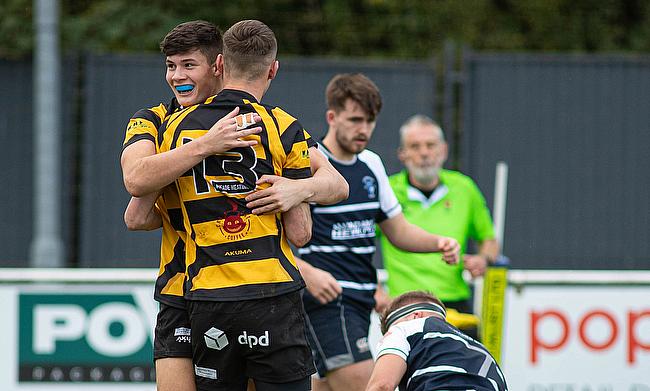 Bang. Just like that, we are in November and Round Nine is set to be a cracker with clubs up and down the land plotting their route to victory. Photo Credit: (Oli Adams)

Peter Winterbottom will be keen for winless Esher to begin November with a spark as they look to end a run of eight straight defeats. Nobody likes to lose, but there is one source of encouragement that the EEEs can take forward. The good news is they have already played four of the current top five but the bad news is the men from Surrey will make it a full house when they visit second-placed Cambridge in Round Nine.

With Chinnor and Hull to come before we enter the festive period, maybe Esher will be targeting those particular fixtures to open their account because Richie Williams’ charges are firing on all cylinders. After their 100 per cent start went against table-toppers Rams RFC  – who go to Leeds Tykes (11th) on Saturday – the Blood and Sand have bounced back with two excellent victories against Cinderford and Rosslyn Park to leave them four points off pole position. Everything suggests Cambridge will extend their unbeaten home record to 13 matches but can Esher upset the applecart?

A privilege to be involved with such a special group of players and staff @camrufc Onto the next one…🟡🔴 pic.twitter.com/a9zH4WEt3S

The aforementioned Chinnor and Hull will hope the form book doesn’t go out of the window as they are the other two clubs currently in the bottom three along with Esher. Both face difficult challenges in Round Nine with the Black and Whites travelling to fifth-placed Cinderford while Hull take on Sale FC (4th) in the North West.

After two straight defeats, Rosslyn Park (3rd) will be itching to return to the winners’ lounge on Saturday when they entertain Birmingham Moseley while Bishop’s Stortford will be going for four wins on the spin at Taunton Titans and Plymouth Albion and Darlington Mowden Park meet at Brickfields.

Here we go again. Saturday, 2:30pm sees two of the strongest clubs we have witnessed in recent seasons in this division collide at Park Lane as Sedgley Park (2nd) take on Fylde (1st). Both teams have won all eight of their games this term, but it is Fylde who have the edge ahead of this showdown having not dropped a single point thus far. Other than Rams in National One, the Lancashire outfit are the only other side with a 100 per cent record in National League Rugby and if that were to remain the same following Round Nine, the momentum will undoubtedly be with Chris Briers and Alex Loney’s charges.

But the Tigers have put themselves in a position where they are ready to pounce. Scott Barrow’s men have not let Fylde run away in the first two months of the season and having done the double over the league leaders in 2021-22, Sedge may feel like they have the psychological advantage. They have also already beaten the other three sides who are currently in the top five at home so if they were to add to that tally, it would certainly change the dynamic at the summit of National Two North.

With Hull Ionians (3rd) and Otley (4th) not in action this weekend after they fulfilled their fixture a few weeks ago, fifth-placed Rotherham Titans will be looking to close the gap when they go to Sheffield and Chester (6th) – who have won five of their last six games – are back at Hare Lane to face bottom of the division Harrogate.

Speaking of the wrong end of the table, Sheffield Tigers’ meeting with Blaydon will be an interesting battle at Dore Moor with the North East outfit keen to move out of the danger zone while Preston Grasshoppers visit Tynedale and Wharfedale welcome Huddersfield to The Avenue.

Another setback for Henley Hawks against a side above them in the standings would have been disappointing for Nigel Dudding and his men last Saturday evening. A narrow loss to Blackheath to add to their defeat away at Old Albanian in Round Two has stalled any potential momentum the Dry Leas outfit may have been generating but considering how congested this division is, success on the road this weekend will give them a platform to go again.

They visit a Worthing Raiders side (4th) who sit two places and two points ahead of them, but the hosts will be in no mood to offer any inspiration to their opponents. Rene Draude and Jordan Turner-Hall’s charges saw their five-match unbeaten run come to a shuddering halt in Round Eight as a 23-point lead slipped away against Guernsey Raiders. The Sussex club are only three points off the top so recapturing their form at the first attempt will be the number one priority at Roundstone Lane.

“It is good to support the club because it means a lot to me and hopefully I will be playing here at the end of my career.”@LeicesterTigers and @EnglandRugby star @PoortvlietJack chats to The National League Rugby Review Show about his time at @NorthWalshamRFC 🙌#Nat1 #Nat2 pic.twitter.com/1IBBMSsHtU

Currently leading the way in National Two East are Blackheath who, with a game in hand, begin November against second-from-bottom North Walsham while Dorking (2nd) host Guernsey and third-placed Barnes take on Canterbury.

Elsewhere, Old Albanian travel to Sevenoaks, Tonbridge Juddians will be searching for their fourth win from their last five games when they visit Westcliff and Bury St Edmunds make the trip to Rochford Hundred.

During the 2021-22 campaign in the old National Two South, Hinckley‘s longest unbeaten run lasted just three games. Fast-forward 12 months and the Hornets have doubled that total for this campaign. An impressive sequence of results leaves the Midlands club third in the standings and just four points off the top with their sights set on making it seven matches without defeat this weekend.

Chris Campbell’s side have picked up notable triumphs against Redruth and Exeter University during this purple patch, and travelling to Clifton will provide another stern test. The Lavender and Blacks had the wind taken out of their sails last time out as a defeat to league leaders Leicester Lions – who visit Barnstaple in Round Nine – saw them slip from second to sixth in the table. Having lost to the current top two already, Matt Salter’s men will want to avoid making it an unwanted hat-trick but Clifton are more than capable of offering up an immediate reaction.

As we begin November, only six points separates the top six and second-placed Dings Crusaders are very much in the tussle for pole position. The Bristol outfit visit Stourbridge on Saturday while in-form Redruth are gunning for a fifth successive victory when they host Bournville and Exeter University (5th) have Luctonians as their guests.