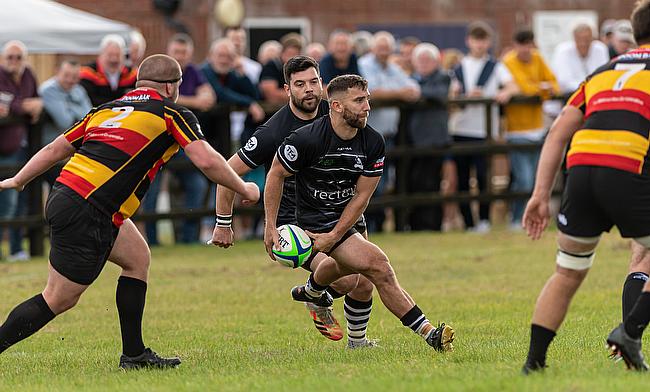 With more promotion candidates facing off in Round 13, the landscape at the top of each division will undoubtedly change over the next few weeks, so expect no early Christmas gifts in the National Leagues. (Photo Credit: David Howlett)

Rosslyn Park may fancy their chances of sitting on top of the tree at Christmas, but National One’s new league leaders know they cannot afford to stick the fire on and put their feet up just yet. Last week, the men from The Rock moved into first position following a hard-fought victory against Caldy and their triumph tasted even sweeter after title rivals Cinderford lost to Sale FC.

Since their only defeat of the campaign against Rams RFC back in Round Six, Park have maintained a look of a side who are challenging for promotion once again, and their first assignment of December sees them host Chinnor. Plotting a positive outcome against the table-toppers won’t be easy for Richard Thorpe and his coaching staff, but after a frustrating run of results, things seem to have plateaued for the Black and Whites as back-to-backs wins has lifted them to third in the standings. These two sides played out a 27-27 draw in this corresponding fixture back in November 2019 so in front of the National League Rugby cameras, more of the same entertainment would be most welcome.

Heading into this weekend, Chinnor sit nine points behind Park so a victory for the visitors could give this title race a new lease of life. Couple that together with another possible Sale FC success, then we could be in for a treat in the third tier. At present, Sale occupy fourth spot in the table and trail the aforementioned Chinnor by just a single point, but whilst we in the media like to create narratives, Jonathan Keep’s side will purely be focused on writing the next chapter in their excellent season this weekend.

The North West club’s superb victory over Cinderford (2nd) in Round 12 was their seventh win from their last eight games and after three successive away matches, they are back on home turf to face Birmingham Moseley. In contrast, the visitors from the Midlands had a bitterly disappointing November and a run of three straight defeats was compounded by Storm Arwen as last week’s meeting with Rams RFC was postponed. So after a difficult month, can Adam Balding’s side provide some early Christmas cheer for the Moseley supporters in Round 13?

Whilst jostling for position at the right end of the table is always a highlight, there is also not much to separate the sides embroiled in a gruelling battle at the bottom. This weekend, the spotlight falls on Leeds Tykes (13th) and Tonbridge Juddians (15th), and both clubs will be kicking off the month in high spirits.

For the Tykes, their heart and desire was on display in Round 12 as Phil Davies’ side produced a remarkable turnaround to clinch a 17-15 victory over an in-form Cambridge. Two wins from their last four matches has kickstarted their season and TJs will be hoping their first triumph since the end of September can have the same effect. Last Saturday, the boot of Tom White guided Peter Dankert’s charges to a 12-10 victory against fellow strugglers Plymouth Albion and with Leeds Tykes only sitting three points and two places ahead of them, can TJs replicate that result to potentially climb off the foot of the division?

Elsewhere in National One this weekend, Rams (5th) – who only featured once in November due to bye-weeks and cancellations – make their long-awaited return to action against Blackheath whilst Caldy will look to bounce back at the first time of asking when they take on Bishop’s Stortford. Meanwhile, Darlington Mowden Park make the 756 mile round trip to Plymouth Albion.

Stourbridge were one of six teams in National Two North who were affected by Storm Arwen last weekend and it meant the league leaders had to watch on as their gap at the top was reduced. Sedgley Park’s excellent away win at Chester means Neil Mitchell’s side are now only one point clear at the summit, but of course, they do have two games in hand to make up.

The Midlands club face Hull Ionians and Luctonians before the Christmas break, but this Saturday’s trip to Fylde is arguably Stour’s most challenging fixture of their festive period. Their hosts in Round 13 currently accommodate fifth place, but they missed the chance to make this meeting with a ‘top of the table clash’ after they were beaten 15-14 by the aforementioned Lucs last time out. The accuracy and consistency we have seen from Fylde so far this season evaded them in Herefordshire but ending Stourbridge’s perfect unbeaten record in front of The Woodlands crowd would certainly be the ideal response.

Whilst Fylde are only five points behind Stourbridge, it is Sedgley Park who are once again breathing down the necks of the table toppers. The Tigers removed all thoughts of their recent back-to-back defeats and produced a ruthless and scintillating display against Chester to revive their promotion ambitions.

Sedge will be aware of Stour’s tricky task in Round 13, but they will only have eyes for another successful Saturday when they welcome Tynedale to Park Lane. As for the visitors, last week’s fixture with Wharfedale was in doubt as the storm had left Corbridge without any power, but when the electricity returned, the North East club were able to surge to their third win from their last five matches. That trio of victories have all come at home, but Tyne did beat Sedge in this corresponding fixture back in 2019/20 so could they repeat that feat again?

Because of recent postponements, the progress of Rotherham Titans (3rd) may have gone under the radar, but their movements up the table were thrust into the spotlight following a devastating performance in Round 12. In Adam Byron’s second game in charge, his side ran in 11 tries to dismantle Loughborough Students and now the Titans are just four points off the summit.

Rotherham are also still unbeaten this term so Huddersfield know the size of the challenge facing them when they arrive at Clifton Lane on Saturday. However, the prospect of getting a result against their Yorkshire counterparts won’t be as daunting as it might have been a month ago as 10 points from their last three games – including successive wins – has given Gareth Lewis’ side a platform to build on. Yes, the odds will be stacked against Field, but the belief they have garnered in recent weeks could help them cause an upset.

Alongside Rotherham in the promotion conversation are Hull who return to action this weekend against Blaydon whilst city rivals Hull Ionians host a rejuvenated Luctonians. Elsewhere, Loughborough Students visit Wharfedale, Chester go to Bournville and Sheffield Tigers are up against Harrogate.

With just three rounds to go until the Christmas break, it literally couldn’t be closer at the summit of National Two South. The leading trio of Redruth, Esher and Worthing Raiders are level-pegging whilst the top half of the division is separated by just six points.

Occupying pole position at the moment are the aforementioned Redruth, but they failed to outwit title rivals Worthing in Round 12. Nigel Hambly’s side were left stunned by two sensational Raiders try so the Reds will now be looking for a reaction when they visit Rochford Hundred.

The hosts come into this fixture on the back of five straight losses, and their latest setback against the 14-men of Hinckley would arguably have been their most frustrating. Despite Rochford’s recent run of form, Danny Cleare’s men have certainly shown they are no pushovers since gaining promotion to National Two South, but they will have to be at their very best to inflict another defeat on Redruth.

"We don't become a bad side overnight.

"We will go away and look at the highlights of the game!” 😉

👉 Subscribe to The National League Rugby Review Show to see if @RedruthRugby can bounce back this weekend: https://t.co/nRgehxuxxx

Whilst Redruth and Worthing Raiders were battling it out in Cornwall last weekend, Esher could not benefit from their promotion rivals locking horns. Their scheduled meeting with Guernsey Raiders had to be postponed after high winds forced Guernsey Airport to close, but the Eees’ title bid will be back in full flight in Round 13 when they take on Bury St Edmunds.

Esher bring their five-match winning run into this meeting with the Wolfpack whilst Jacob Ford will be seeking an improvement from his side despite a gritty victory against bottom of the table Westcliff. However, Round 12’s success might have been a welcome shot in the arm for Bury following a run of tough fixtures, but with Esher, Clifton and Old Albanian to come before Christmas, it won’t get any easier for the Suffolk outfit. Can they take inspiration from last week’s triumph?

Worthing Raiders’ promotion hopes looked to be fading rapidly before last weekend. Three defeats from their previous four matches had seen them fall off top spot, but just when any doubts might have been creeping in, Jordan Turner-Hall’s side secured a brilliant victory against fellow title candidates Redruth.

But after seeing off one of their rivals, another one is just around the corner in the shape of Clifton. In a way, they went through the same mini-dip in form as Worthing experienced and since then, the Lavender and Blacks have pulled themselves right back into the promotion picture. Last week’s battling win over Canterbury means Matt Salter’s side are just three points behind the leading pack so a fourth triumph in a row would only add more spice to an already gripping title race.

Also in National Two South this weekend, an in-form Henley Hawks travel to Barnstaple whilst Leicester Lions’ meeting with Barnes is our Featured Game of the Week in the division. Elsewhere, Guernsey return to action against Old Albanian, Dings Crusaders face Hinckley and Canterbury entertain bottom club Westcliff.