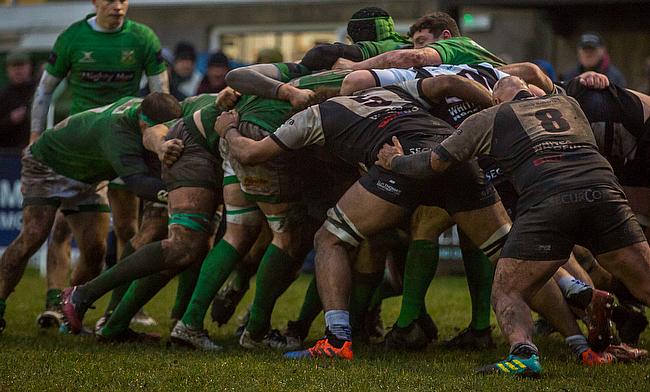 As part of Movember 2021, we will be producing a series of articles explaining why our clubs are supporting the world’s leading men’s health charity. Photo Credit (Ro Burridge)

First up, we hear from Luctonians Head Coach Ryan Watkins…

“I have always said I don’t want to do it, but I am actually doing it this year!”

Ryan Watkins laughs on the other end of the phone. As October slowly creeps into November, the Luctonians head coach is preparing his side for the run-up to Christmas.

The Herefordshire outfit are scheduled to play seven matches between now and the festive period and whilst every side across the National Leagues will be targeting some on-field success, Luctonians are also playing their part away from the pitch.

And that is because the National Two North club are just one of many teams taking part in Movember this month.

We are highlighting the work of @MovemberUK as they continue to raise awareness for #Mentalhealth and suicide prevention, prostate cancer and testicular cancer.

National League Rugby wants to play their part. Sign up to our page to get involved! 👇👨https://t.co/yhIQuMJgee pic.twitter.com/00apRAE4Ec

Since 2003, more than 6 million people across 20 countries have joined Movember, the world’s leading men’s health charity. Their aim is to help raise awareness for mental health and suicide prevention as well as fighting against prostate and testicular cancer.

Watkins, who has been affiliated with Luctonians for seven years, is joining his fellow coaches – as well as around 20 of his senior players – in growing a moustache as part of the Movember challenge. “If we can raise money for a good cause by making it into a bit of social and making ourselves look a bit silly, then it is great to be involved with,” he adds.

Raising funds for charity is something which is woven into the fabric of Luctonians. Their community work continues to thrive and even as recently as September, the club generated over £14,000 for Prostate Cancer UK.

But now their efforts turn to Movember and Watkins explains why it is important for the club to raise awareness on behalf of the charity.

“I am not going to name names, but we have had a few guys that have struggled with mental health problems and we as coaches try and help those guys out,” Watkins says.

“There is still that sense of someone not wanting to admit if they have a weakness, but I think once lads get it off their chest and talk about it, they see, as a club, we are pretty open to having a discussion around it to try and help them out. I think that takes a weight off their shoulders and we will try and understand the best we can.

The boys are all supporting @MovemberUK for different reasons.
And some of them Mo because they look great with a 'tache!

Whatever the reason, it is all in support of Men's Health.

You can support the boys on their Mo Journey by following this link – https://t.co/ZU1jlw3qIq pic.twitter.com/XC85eGQDTh

“Not wanting to talk is a common thing. I think a lot of men go through it and hopefully we can keep raising awareness with things like this.”

Watkins used to don the black and white Luctonians playing jersey before stepping into the head coach’s hot seat, and having seen the game evolve during his time in the sport, he feels the stigma surrounding men discussing their health problems is slowly being eradicated.

“I do think a lot more people are open-minded and better educated these days on subjects like mental health, for example,” Watkins says.

“It is not something you can just shrug off and just talking about these things can actually help a lot.

“I think back to when I played and I don’t think I would ever have said anything. I have never struggled with anything like that personally, but I have had people close to me that have. You can’t actually guess a lot of the time. It is quite hard because people hide it well.

“I suppose it then manifests itself into something quite sinister and comes out in the worst way imaginable. Someone may say they do think they are OK, but they admit they need X, Y, Z from myself or someone else at the club to help them. They just want to let us know why they haven’t been feeling great and I think that leads to that bit of understanding being there.

“They then know whoever they reach out to will try and understand what they are going through and see what they can do to help. I suppose myself a few years ago, I may have said, ‘you just have to get on with it,’ but you realise you do have to take a step back and listen.”

Luctonians’ Movember campaign began on Monday and they will be hoping to increase their fundraising efforts by hosting a social event following their home fixture against Fylde on 27th November.

Before that though, the club start the month by hosting Chester. The initial meeting between the sides was scheduled for 11th September, but it had to be postponed following a coronavirus outbreak in the Lucs squad.

Winning runs coming to an end and more intrigue at the top is a combination that is making the National League season very exciting #Nat1 #Nat2n #Nat2s https://t.co/N56eJU3Ese

At the beginning of October, the Herefordshire outfit also had their clash against Harrogate called off due to Covid-19 concerns meaning Watkins’ charges have only played seven matches this term whilst the majority of their National Two North compatriots have completed all nine fixtures.

The men from Mortimer Park have only tasted victory on one occasion thus far and sit 14th in the table, but Watkins believes their position in the standings is not an accurate representation of how his side have performed.

“If teams make the mistake of looking at the league table and think ‘we will turn these boys over’, they will probably be quite mistaken by that,” Watkins says as he reflects on the last three games.

“Against Sedgley Park [National Two North league leaders] last week, that was frustrating. It was 17-7 after 60-odd minutes. We felt like we had a bit of dominance in the game, but they get a couple of breakaways and the scoreline looks a little bit nastier than it probably should do for us.

“I think in the last one [home match] against Wharfedale, we made a couple of mistakes. They scored two tries and we were looking around for the answers, but we stuck at it and came back in the second half to snatch a point.

“Rotherham [third in the table], we were more than competitive with. I think we gave a really good account of ourselves up there and I think we showed how competitive we are.”

With no relegation this year, Luctonians – who avoided the drop in the curtailed 2019/20 season – are using this campaign to develop their squad as they look to sustain themselves in National Two North.

As part of their philosophy, Watkins has handed younger players the opportunity to learn their craft in the fourth tier.

With just one victory to their name, it would be easy for the hierarchy at Mortimer Park to rip it up and start again – especially with an in-form Chester coming to town on Saturday – but Watkins and his coaching staff continue to back the emerging talent at the club.

He adds: “We lost a couple of boys in the various lockdowns because they found other things to do with their weekends so we have had to blood a few youngsters probably earlier than we would have wanted, but they will be better for it.

“We want to stick behind those guys and help them along the way. We want to win games still, don’t get me wrong, but we have got to appreciate that we are trying to learn and get these boys up to speed to get them ready for the next year or two. I think it has been and will be a useful year for that.

“We have not had a kneejerk reaction to say we have got to recruit X, Y and Z in terms of players across the pitch just because we have lost games. We have got to give boys a run in the team because they are not going to learn from one game and then getting the hook. You have got to go in there for three or four weeks and see if they can find their feet a little bit. Some young lads have really done that so we have been quite impressed.

“We are excited for Saturday like any home game. Dare I say we might get a bit of luck this weekend! I think we deserve it because the lads have worked hard and losing a few games as we have done, it is hard with any young squad to have that confidence and belief but we are sticking to what we are doing.

“It sounds like a simple thing, but they [the young players] have got a lot of tools in terms of abilities or ways of winning games and we have just got to learn as young guys how best we do that and I think it will come through.”

Also on this first reserve weekend of the season, Birmingham Moseley travel to Taunton Titans in National One whilst Blackheath visit Leeds Tykes in the same division.

Catch all the action from this weekend for FREE on The National League Rugby Review Show.