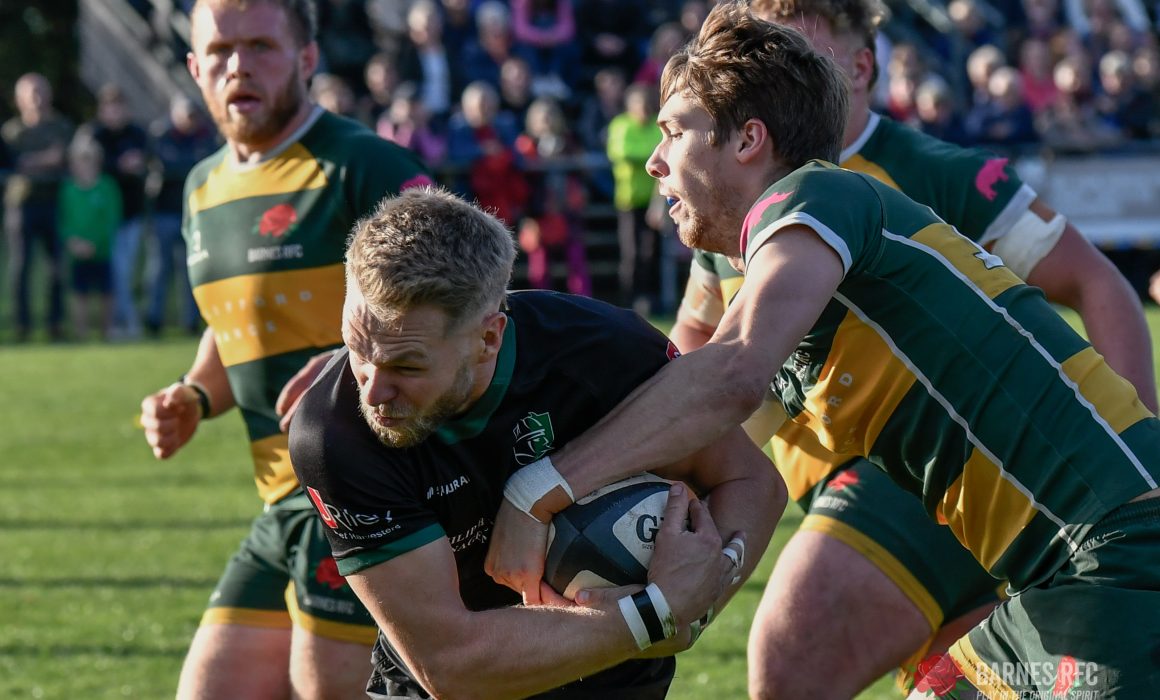 With the second part of the campaign now underway, title challenges and battles for survival become much more significant with teams at either end of their respective divisions eager to achieve their goals. Photo Credit: (Jonathan Knight)

Despite a tough opening half of the season for Hull, 2022 is a year that the club will always remember. A historic promotion to National One will live long in the memory but as they turn over the calendar at the Ferrens Ground, it arguably feels like a fresh start for the Yorkshire outfit.

Following 12 defeats from their first 13 matches at this level, Hull will be keen to reset and put the past four months behind them as they look to pull off a remarkable escape from the relegation zone. They are currently 15 points from safety with two games in hand but if they are to beat the drop, they will do so without Gary Pearce. On Tuesday, the club announced their Director of Rugby was stepping away from his role for personal reasons and Hull have confirmed his successor as former Hull Ionians coach Mike Umaga.

Our new Director of Rugby Mike Umaga at his final training session before his first game in charge at home to Rams on Saturday at Chants Ave (2pm)#HullRUFC #HullRugbyUnion @BealHomes pic.twitter.com/zj6SpCIvTt

The squad have been preparing for their first bout of 2023 against title-chasing Rams RFC (2nd). A frustrating December – which included successive defeats and the postponement of their derby day clash with Chinnor – prevented Seb Reynolds’ side from being Christmas No.1. They start the New Year four points behind Sale FC – who host Plymouth Albion this weekend – but the Berkshire club do have a game to spare. Contrasting targets then in East Riding but who will prevail in Round 15?

Underneath the top two of Sale and Rams are Rosslyn Park who waved goodbye to 2022 with a bonus-point success over Esher. Kieran Power’s side open their account for this year on Friday night when they face Chinnor at Kingsey Road in what will be Nick Easter’s first game in charge of the Black and Whites.

Cambridge (4th) are 11 points off the summit and have two games in hand over a couple of their rivals but that could potentially count for nothing if Richie Williams’ side slip up on Saturday afternoon against a Taunton Titans outfit who have lost their last six games and sit just one point above the drop zone.

Despite some encouraging performances before Christmas, fellow relegation candidates Leeds Tykes will be keen to arrest a run of seven matches without a victory when they visit Cinderford (5th) while Esher – who are one point from safety – welcome Birmingham Moseley to Surrey and Bishop’s Stortford entertain Darlington Mowden Park.

Chris Briers and Alex Loney’s Fylde ended the first portion of the 2022-23 campaign with 11 victories to their name and it means the Lancashire club are once again in the promotion mix at the turn of the year. This is becoming a regular theme for the men from Woodlands but whether they can take the next step remains to be seen.

In recent seasons, mini-blips in form – combined with the relentless momentum of others – has proven to be their downfall but this time around, they are still very much on the coattails of the unbeaten Sedgley Park. Their first assignment of 2023 sees them travel to Harrogate and on paper, everything points to an away win. Fylde have scored the most points in National Two North thus far while the hosts have conceded the second-highest total, but the Yorkshire club will be out to upset the applecart.

After collecting points in all but one of their last five games – including commendable efforts against Hull Ionians (3rd) and Otley (4th) – Martyn Wood’s side are now only five points from safety but having shipped an average of 62 points in their last three meetings with Fylde, Harrogate will have to be on the money to gain a positive result at Rudding Lane.

The aforementioned league leaders – Sedgley Park – are the only club across all four National League Rugby divisions yet to taste defeat and next to try and crack the code are Preston Grasshoppers while third-placed Hull Ionians host Wharfedale before back-to-back crunch matches against the top two.

Also across the league, Otley – who had a superb 2022 – begin the year in front of the Cross Green faithful as they take on Sheffield and Chester face Huddersfield while Rotherham Titans travel to bottom-of-the-table Blaydon and Tynedale go to Sheffield Tigers.

At this moment in time, North Walsham’s destiny is in their own hands. A run of two wins from their last five matches might not sound too glamorous, but victories over Westcliff and Sevenoaks have given them a platform to build upon. The Norfolk outfit are just four points adrift of safety and they also have a game in hand over the trio of sides above them so if they were able to beat Old Albanian on Saturday and other results went their way, they could climb free of the relegation zone.

But that is easier said than done. With a tight battle developing at the bottom, the fight for top spot in National Two East will continue in Round 15 with OAs very much in the mix. Dan George and James Osborn’s men are just six points behind league leaders Blackheath – who go to Rochford Hundred this weekend – and they begin the New Year on a run of four straight wins. With fourth-placed Tonbridge Juddians and the aforementioned Blackheath to come later this month, getting off to a positive start might be key if OAs are to sustain a title challenge.

The National League Rugby Review Show is back for 2023 📺🤩

Join us on Monday from 6pm to catch the best of the action + all the highlights from Round 15.

Sandwiched in between table-toppers Blackheath and Old Albanian are Barnes who were one of just four sides in action before the Christmas break. Despite the freezing temperatures wreaking havoc, Jack Heald’s charges were able to close the gap at the summit to just four points thanks to a 26-14 win over Guernsey Raiders and they start 2023 with a tasty contest against fellow promotion candidates Dorking.

Elsewhere in National Two East, Tonbridge Juddians – who have won six of their last seven matches – go to Bury St Edmunds and Worthing Raiders visit Sevenoaks while Henley Hawks travel to Guernsey Raiders and Canterbury, who will be keen to start moving away from the relegation places, host bottom-of-the-table Westcliff.

So what does National Two West have in store for us in 2023? Well, Hinckley and Barnstaple will be eager to pick up from where they left off in 2022 as both clubs concluded the year with a spring in their step. In all honesty, the Midlands side would have been very satisfied with their work in the opening part of the season as Chris Campbell’s men find themselves in third spot as things stand. Yes, they might be 15 points behind frontrunners Leicester Lions – who resume their title challenge at Newport (Salop) on Saturday – but Hinckley do have a game in hand and there is still an awful long way to go.

The Hornets welcome Barnstaple to Leicester Road on the back of four successive victories but the visitors enter this fixture in decent form themselves having recorded two consecutive wins before the festive interlude. Successes against Loughborough Students and Stourbridge saw the Chiefs surge out of the relegation places and they are now one point above the dreaded dotted line. A trip to Hinckley will be one of their toughest tests between now and the end of the campaign but if Barum are to gain a positive outcome in Round 15, it will most certainly boost their survival chances.

Scrapping for position alongside Barnstaple are Bournville, Hornets and Old Redcliffians. The latter have a couple of games in hand over their rivals and they open their account for 2023 with a Bristol derby against fifth-placed Dings Crusaders while Bournville – who are currently one point from safety – travel to Luctonians (6th) and Hornets host Redruth (4th).

Elsewhere, second-placed Clifton will be looking to strengthen their promotion aspirations from the word go when they visit bottom of the division Stourbridge while it is an all-university affair when Exeter University entertain Loughborough Students.