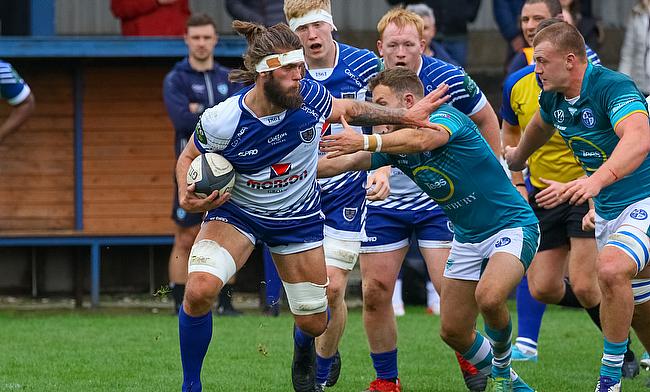 It is too early to start discussing a full-blown title race in National One, but with the top four colliding on Halloween weekend, it is certainly worth screaming about. Photo Credit: (Gareth Lyons)

Plus, we preview some of the eye-catching fixtures in National Two.

It is safe to say we are in for a thrilling National One weekend as the top four all meet in Round Nine. Spooky, ah? League leaders Cinderford continue to treat their fans this season and eight successive victories means they are guaranteed to enter November at the summit.

Last time out, there was once again no moans and groans from the Dockham Road faithful despite being given a fright by Taunton Titans, but Rosslyn Park – their next opponents – may have a few tricks up their sleeve to topple the Foresters. The third-placed side weren’t in action last week, and currently, they sit 10 points off the top with a game in hand, but a win for Kieran Power’s men on Saturday would certainly add extra spice to an already exciting title race.

The former @EnglandRugby 7s man scored for the #Nat1 league leaders in Round 8.

Next we sink our teeth into another mouth-watering National One clash as Rams RFC and Sale FC look to carve out a final victory in October. Starting with the Rams, they will be keen to lift their spirits after suffering a 29-23 loss to Darlington Mowden Park in Round Eight and now Seb Reynolds’ side are eight points behind table-toppers Cinderford.

The second-placed outfit welcome Sale FC to Old Bath Road, who fly into this weekend in excellent form. Jonathan Keep’s charges have won four of their last five games which leaves them in fourth position, but their away record has haunted them up to now. This term, they are yet to taste victory on the road so the North West club will be hoping to turn their fortunes around on their travels.

Down towards the bottom of National One, Plymouth Albion seem to have brushed off the cobwebs and come to life in recent weeks. Damien Welch’s side lost their first five games of the term, but back-to-back victories against Birmingham Moseley and Blackheath have kick-started their campaign.

With Albion slowly coming into form, they host Caldy this weekend and they are also enjoying a positive sequence of results. Gareth Davies’ men are unbeaten in five matches – three wins and two draws – and find themselves five points clear of Plymouth heading into this fixture. The Wirral outfit are showing they are not afraid of the challenges National One has thrown their way so far, so can they leave Devon with a spring in their step?

There are only five scheduled games in National One after Birmingham Moseley v Taunton Titans was postponed due to Covid, so the other two fixtures see Chinnor travel to Tonbridge Juddians and an in-form Cambridge take on Darlington Mowden Park.

Sedgley Park might have suffered a slight scare in Round Eight against Hull Ionians, but National Two North’s league leaders kept their composure to maintain their unbeaten record. The Tigers have not lost a single fixture so far this term, so they will be dying to carry their excellent form into the first reserve weekend of the season.

Faced with the daunting prospect of taking on the table toppers are Luctonians, and the visitors arrive in Lancashire still searching for their second victory of the campaign. Lucs may have been reduced to 14-men shortly after half-time against Wharfedale last week, but their heart and endeavour earned Ryan Watkins’ side two bonus points. That grit and determination will most certainly be needed at Park Lane on Saturday if the Herefordshire side are going to gain a positive result.

Hull and Rotherham Titans have delivered some magical moments so far this term and the Yorkshire clubs clash this weekend as second take on third. Currently occupying the silver medal position are Hull who stretched their winning run to six matches following their success against Harrogate last time out.

BOO! Who wants to treat themselves to a Halloween deal? ??

From 6pm on Friday, The National League Rugby Review Show will be £7 for the whole season! ??

Catch all the action from Round 9 including our key and featured games!

As for the Titans, their scheduled meeting with Stourbridge was postponed due to Covid-19 concerns so Rotherham will be looking to put on a show at Clifton Lane as Martin Jenkinson’s charges aim to maintain their unbeaten record. You can dress this fixture up whichever way you like, but it has all the ingredients to be another National Two North classic.

The National League Rugby Review Show’s key game in Round Nine comes from the Midlands as Loughborough Students take on Sheffield Tigers. The hosts will be looking to lighten the mood on Saturday after losing to Tynedale last weekend, which saw a positive run of results for the Students hit a bump in the road.

In terms of the visitors, Jamie Broadley’s side come into Saturday with back-to-back wins under their belt after defeating newly promoted Bournville and Blaydon, respectively, but it is their away day demons that need banishing this weekend. The Yorkshire club have won just one of their last nine games on the road (a run which includes the tail end of the 2019/20 campaign), so can the Tigers roar their way into November?

Also across National Two North this weekend, the division’s highest point-scorers Fylde travel to Blaydon whilst Stourbridge – who have won all six of their fixtures so far – visit Wharfedale. Elsewhere, Hull Ionians take the trip to Bournville, Chester are at Harrogate. Tynedale’s clash with Huddersfield has been postponed due to Covid concerns.

The last time Guernsey Raiders were in National Two South, they may have classed that 2018/19 season as a nightmare, but right now, Jordan Reynolds’ side are in dreamland. The Channel Islanders find themselves leading the way as October draws to a close and it is safe to say not even the most optimistic Raiders supporter would have predicted this.

However, their seven-match winning streak will be tested when they host Redruth in Round Nine. Last time out, the Reds toiled in the first half against Esher and it ultimately cost Nigel Hambly’s men their own unbeaten record, but with the Cornwall outfit sitting in third-place and just two points behind the Raiders, they will be hoping to cause the home side some trouble at Footes Lane.

Level on points with Guernsey are Worthing, who lost their position at the top of the division after suffering a defeat against Leicester Lions in Round Eight. A second-half try from Jake Sterland delivered the killer blow to the Sussex-based club, so the Raiders will be keen to bite back when they entertain Barnes on Saturday.

As for the away side, it has been a bit of a mixed bag in October as two draws and two defeats leave Barnes in 12th place. The aforementioned stalemates against Canterbury and Esher certainly highlight the club’s resilience to fight back, and the men from the capital will have to show those characteristics once again if they stand any chance of tasting a win on the road for the first time since the opening day.

National Two South’s featured game of the week comes from Essex as Rochford Hundred take on Leicester Lions. The Midlands club were arguably the talk of National Two South in Round Eight as their victory over Worthing helped blow the title race wide open once again.

Ahead of a huge week for leaders @GuernseyRFC, brothers Matt and Anthony Armstrong join to preview the visit of Nat 2 heavyweights Redruth to Footes Lane 🏉

Plus there’s chat on cycling, football, boxing, and the @gg_marathon 🗣

The 17-7 success was their third consecutive home triumph, so Gareth Collins’ side will be hoping to concoct the same winning formula and translate it onto the road. Their hosts, Rochford Hundred, had their own purple patch of form ended by Barnstaple last time out so the newly promoted side will be aiming to end a pretty sweet October (where they have picked up 10 of their 14 points this term) with another positive result.

Elsewhere on this Halloween weekend, it is fourth vs fifth as Esher collide with Clifton whilst Old Albanian head to Westcliff, with the hosts now the only side across the three divisions still seeking their first win of the season.

This week’s National League Rugby Review Show is sponsored by Computacenter, a leading independent provider of IT infrastructure services, enabling users and their businesses in a digital world.