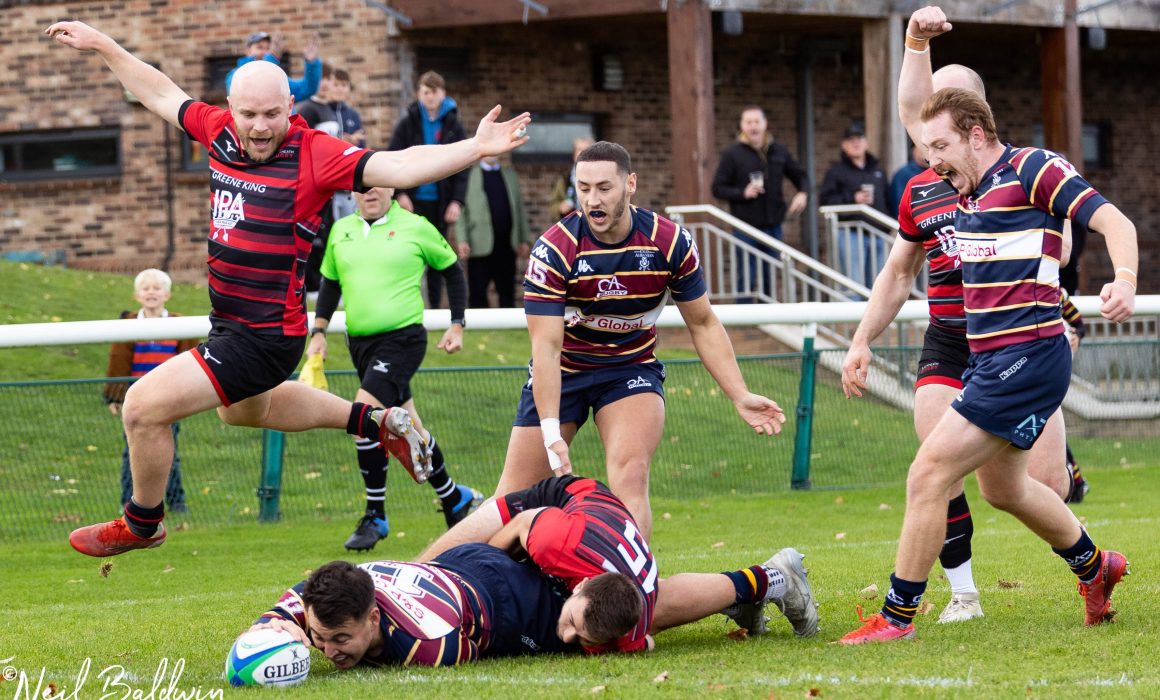 The competitiveness of the third tier keeps providing us with some superb entertainment while National Two East has become bunched up once again. Photo Credit: (Neil Baldwin)

Rams RFC held off a second-half revival from Cambridge to secure a 29-26 bonus-point win and end the Blood and Sand’s 100 per cent start to the season.

James McRae and Josh Collis crossed for Rams and Joe Tarrant went over for Cambridge in the first half before Alex Seers gave the hosts a 19-7 lead.

Robbie Stapley got Rams’ fourth score and a penalty from Seers kept Seb Reynolds’ side in the ascendency.

However, a quick-fire brace from Kwaku Asiedu and a penalty try saw Rams’ comfortable advantage evaporate as the deficit was down to three points entering the final 10 minutes.

But the home side were able to hold on to record their sixth maximum of the campaign while Cambridge experienced their first loss of the term.

Rosslyn Park are the only other side in the division to collect 30 points from 30 as Kieran Power’s charges defeated Darlington Mowden Park 33-28 in the North East.

Our very own President Pete Bell attended his 1st game of the season and what a game it was to! Here he is leading the celebrations after the full time whistle. 😁 🏉🏉🏉 pic.twitter.com/xTzKSCKZeZ

Charlie Walker and Matt Gordon both notched two tries apiece while Cinderford are up to third following a stunning comeback against Sale FC.

Paul Morris’ men were 18 points down at half-time but turned the contest around at Dockham Road to clinch a 27-26 win.

Sale had leapt out to a 19-5 lead midway through the first half as Kieran Wilkinson, Tom Walsh and Sam Dugdale crossed for the visitors.

Mike Austin added a penalty to Will Hendy’s earlier score for Cinderford, but a second for Walsh kept Sale on top before the break.

However, the Foresters fought back as two tries immediately after the interval from Nathan Taylor and Austin shifted the momentum before a penalty try six minutes from the end sealed a fifth win in a row for Cinderford while Sale have now suffered two successive defeats.

Down towards the wrong end of the table, Chinnor have slipped into the bottom three after falling to a 30-22 home defeat against Plymouth Albion. Their fifth loss of the term was compounded by Taunton’s welcome 29-21 triumph over Esher at Moseley Road as the victory for Tony Yapp’s men lifted them out of the relegation places.

Elsewhere, Hull are still searching for their first win of the campaign as a late Kieran Davies try secured a 27-22 success for Leeds Tykes while James Ayrton’s brace helped Bishop’s Stortford to a  29-23 win against Birmingham Moseley in a fiery contest at Silver Leys.

Fylde sent out a serious message to the rest of National Two North as the league leaders produced an outstanding display to beat Rotherham Titans 41-16 as they continued their unbeaten start to the campaign.

Chris Briers and Alex Loney’s side headed into Round Six with a 100 per cent record, but they knew travelling to Rotherham would be their toughest test to date.

The men from Woodlands held a slender four-point lead at half-time after tries from Adam Lanigan and Connor Wilkinson.

Sam Boxhall’s score and the accurate kicking of Corben Ollivent had kept the Titans in touch but Ben Gregory went over two minutes after the break to stretch Fylde’s advantage.

Another three points from Ollivent cut the deficit but Fylde put their foot down in the final quarter as Sam Stott and Jordan Dorrington both crossed while two conversions and a penalty from Greg Smith made sure of a sixth win on the trot.

It was double delight for the county of Lancashire on Saturday as Preston Grasshoppers recorded their second victory of the campaign as they beat Sheffield Tigers 24-18 in front of The National League Rugby Review Show cameras.

The hosts led by 14 points at half-time at Lightfoot Green thanks to tries from Jacob Browne and Scott Richardson.

Ben Dorrington’s score kept Hoppers in control after the restart but Sheffield Tigers were able to salvage a losing bonus-point following two tries in the final minutes from Simeon Meek and Barney Goatley.

Back towards the top of the division and Sedgley Park remain on the coattails of table-toppers Fylde as Rhys Henderson scored an astonishing five tries to help his side to a 42-15 away win over Blaydon and their sixth successive triumph of the term.

Scott Barrow’s troops are just two points off the summit while Hull Ionians have moved up to third spot following a comprehensive 58-17 win over bottom-of-the-table Huddersfield, with winger Sam Wilson bagging a hat-trick.

Elsewhere, Sheffield’s fine start to life back at level four continued as full-back Christian Hooper also scored a treble in their 47-22 away triumph against Harrogate, Jake Rogers guided Tynedale to a 29-22 win over Wharfedale and Blake Morgan’s brace saw Otley edge past Chester 24-22 at Hare Lane.

Old Albanian put a stop to Blackheath’s 100 per cent start to the season as centre Sam Jones starred in their 24-19 win at Woollams.

‘Club’ had begun the day with four bonus-point victories from four to their name, but they trailed 12-7 after shipping two tries scored by Jones and Alex Noot.

However, scores from Paul Schroter and Oliver Walliker – adding to Tom Ffitch’s earlier effort – gave Blackheath the lead at the break.

But the away side were unable to add to their tally in the second 40 as Jones and Kemp Price both touched down to ultimately seal a fourth straight success for OAs.

James Osborn’s side have now moved to the top of the National Two East standings and only four points separates the top six sides in the division.

Dorking are up to second in the table as James Catton’s last-gasp try earnt the Red and Whites a narrow 12-10 win against Canterbury while Barnes (3rd) beat North Walsham 36-10 on the road, fifth-placed Henley Hawks got the better of Tonbridge Juddians 23-10 and Worthing Raiders (6th) continued their resurgence with a 22-14 victory against Bury St Edmunds.

Meanwhile, Rochford Hundred returned to winning ways as they defeated Sevenoaks 24-19 and Guernsey Raiders ran in 11 tries to thump Westcliff 71-14.

The Crusaders scored four tries in the first-half in Bristol, with Luke Arscott, Tom Knight, Matt Smith and Ciaran Donoghue all going over.

Barnstaple did cross for the first try of the second 40 through Sam Roberts but in truth, the half belonged to Dings centre Smith as he scored on three more occasions while full-back Donoghue helped himself to his second.

Stean Williams’ men remain three points clear at the summit after Leicester Lions cruised to a 45-19 away victory against Old Redcliffians. Fellow promotion candidates Clifton defeated Bournville 57-28 in the Midlands with Zac Ward and Zakaria Hamid at the double while Exeter University had to battle hard to earn a 48-40 win over Hornets.

Elsewhere, Hinckley extended their unbeaten run to four matches as Shae Nixon scored four tries in their 40-24 victory over Stourbridge, Redruth capitalised on some Luctonians indiscipline to record a 33-22 win and Loughborough Students recovered from losing a 17-point lead against Newport (Salop) to claim a narrow 24-22 success at Forton Road.