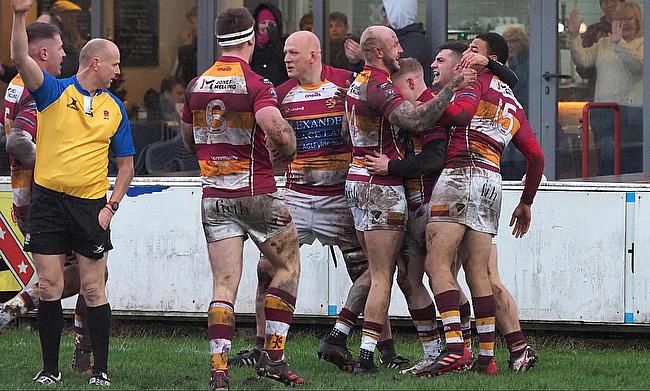 The weekend just gone in the National Leagues once again underlined why this season has been so compelling  across tiers three and four. (Photo Credit: Chris Farrow)

Rosslyn Park’s gap at the summit of National One is now six points after they survived a late rally from Chinnor to secure a 28-27 victory at The Rock.

In front of the National League cameras, tries from Chinnor’s Ben Manning and William Millett set up a tense finish in the capital but Kieran Power’s side had done enough to clinch their sixth win in a row.

Park led 21-12 at half-time thanks to a brace from Phil Cokanasiga and Austin Hay’s effort whilst Will Ryan and Oscar Heath crossed for the visitors.

A James Bourton penalty was immediately cancelled out by Arthur Ellis’ try but despite Chinnor putting themselves into a position to snatch the win, National One’s table toppers held on.

At the other end of the division, Plymouth Albion have jumped out of the bottom three as hooker Max Norey scored four of their seven tries in a 49-22 triumph over Darlington Mowden Park.

In a game which saw five yellow cards dished out by referee Andrew Wigley, Albion had a healthy lead at the break following two Norey tries, one from Cameron Setter and 11 points from the boot of Connor Eastgate.

📺 The National League Rugby Review Show: Round 13@WMuggleton is at @rosslynpark as he wraps up all the action from another sensational weekend.

Joe Craggs added to Ralph Appleby’s earlier effort to get the ball rolling for DMP in the second 40 but two further tries from Norey, either side of Michael Stupple crossing, made it 43-10 to the hosts.

Paul Jarvis and Shea Cornish swapped scores before DMP made sure they left Brickfields with a try bonus-point after Fred Lockwood’s late score.

Leeds Tykes are level on points with Plymouth after they held on to clinch a 21-19 triumph against Tonbridge Juddians.

Two penalties from Connor Lloyd and a converted Harry Robinson try had given the Tykes a seven point lead, but the boot of Ryan Taylor-Dennehy and John Perry-Parker’s score made it all square at the interval.

Another three points from Lloyd and a second try for Robinson gave Leeds their lead back but Taylor-Dennehy kept TJs in touch from the tee.

However five minutes from time, the visiting fly-half was unable to secure the win for his side as his penalty attempt was off target.

Elsewhere in National One, Sale FC’s march continued as they dispatched Birmingham Moseley 24-0 to move up to third in the league standings and Caldy returned to winning ways at the first time of asking after beating Bishop’s Stortford 31-20.

Also in Round 13, Jake Lloyd’s second half score was enough for Blackheath to seal an excellent 17-13 win away at Rams RFC and Cambridge had to settle for their third stalemate of the campaign as Taunton Titans scored two late tries to rescue a 26-26 draw.

Sedgley Park have moved back to the top of National Two North after hammering Tynedale 41-7.

Tries from Jamie Harrison and Matt Riley helped The Tigers into a 10-0 lead before Rhys Henderson, Matt Gallagher and Steve Collins all went over to make it 29-0 at the break.

Andy Riley added Sedge’s sixth try straight after the interval and while Ben Blackburn was next to respond for Tyne, Henderson’s second of the afternoon put the icing on the cake for the home side.

Sedge are three points clear at the summit, but second-placed Rotherham Titans maintained their unbeaten record in Round 13 as they defeated Huddersfield 26-12 at Clifton Lane.

The Titans, who have two games in hand over Sedgley Park, led 21-0 at half-time thanks to tries from Sam Boxhall, Matt Smith and Zack Poole.

However, Huddersfield sparked into life and scores from Lewis Bradley and Tom Hodson pulled them right back into the contest heading into the final quarter.

But, Rotherham made it 11 games without loss following Callum Bustin’s try 12 minutes from time.

Hull are level on points with Rotherham after Mike Jobling scored a hat-trick to help the Yorkshire outfit to a 38-19 success against Blaydon.

The visitors went ahead when Jobling dotted down twice in the opening 13 minutes before Nathan Bailey hit back.

However, Hull’s hooker wrapped up his trio of tries midway through the half and when Tipiloma Kivalu crossed shortly after the break, Gary Pearce’s men had a firm grip on proceedings.

Jack Appleton crossed for Blaydon’s second but further scores from Will Hall and Keane Naylor completed the victory for Hull, despite Bailey going over late on for the North East outfit.

Whilst wins for Sedge, Rotherham and Hull enabled them to climb the league, their movements were also aided by Fylde who ended Stourbridge’s 100 per cent record on Saturday. The Lancashire club clinched a tight 15-10 win at Woodlands to add extra spice to an already gripping title battle in National Two North.

Meanwhile, Hull Ionians beat Luctonians 18-7 and Loughborough Students’ own indiscipline cost them against Wharfdale who claimed a 15-14 win at The Avenue. Also in the division, Bournville recovered from 14-0 down to clinch a 22-14 victory over Chester and a strong second half display helped Sheffield Tigers see off Harrogate 27-7 in an all Yorkshire affair.

Redruth bounced back from last week’s loss to Worthing Raiders with a hard-fought 34-28 victory over a resilient Rochford Hundred.

Dean Bonds scored two tries in the first half, while Mackenzie Oliver, Jack Oulton and Lewis Thomas also crossed for the away side.

Rochford Hundred full-back Mark Billings also bagged a couple of tries to clinch a bonus-point for the hosts as he added to the efforts of Chris Shields and Harry Hudson.

The Reds are top of the pile, but remain level on points with Esher who sealed a thrilling 40-36 win against Bury St Edmunds in Suffolk.

The Wolfpack produced a late surge, but the Eees held on for what might turn out to be a crucial win in a tight title race.

Esher did lead 30-10 at the break following braces from Andrew Hamilton and Jack Lavin, whilst the latter also slotted a drop-goal.

Sam Morley had also gone over for the visitors, but Bury clicked into gear after the interval as Chris Bolton and Shaquille Meyers both touched down to add to Ben Penfold’s second minute try.

However, Esher dented Bury’s chances of mounting a comeback as two quick-fire scores from Ruaraidh Smith and Myles Rawstron-Rudd were ultimately enough to see the visitors home and dry.

Will Affleck and Charlie Reed made sure Bury collected two bonus-points from this entertaining contest, but it was too little, too late to effect the outcome of the game.

Clifton’s recent good form has launched them back into the thick of the promotion battle and it continued in Round 13 following a narrow 24-23 victory over rivals Worthing Raiders.

Two Matt McLean penalties gave Worthing a 6-0 lead, which was extended after half-time following tries from Harrison Sims and the Raiders full-back.

However, Clifton flipped the game on its head in a 16 minute spell when Alex Giltrow, Marcus Nel and Alex Forrester went over, with Luke Cozens converting all three scores and adding a penalty.

Jack Forrest did cross the whitewash late on for Worthing, but Clifton’s second half revival saw the Lavender and Blacks secure their fourth win on the spin.

Henley Hawks are also right in the mix for top spot after securing a 26-5 victory over Barnstaple. Nigel Dudding’s side have now won six of their last seven matches and sit just four points behind leaders Redruth.