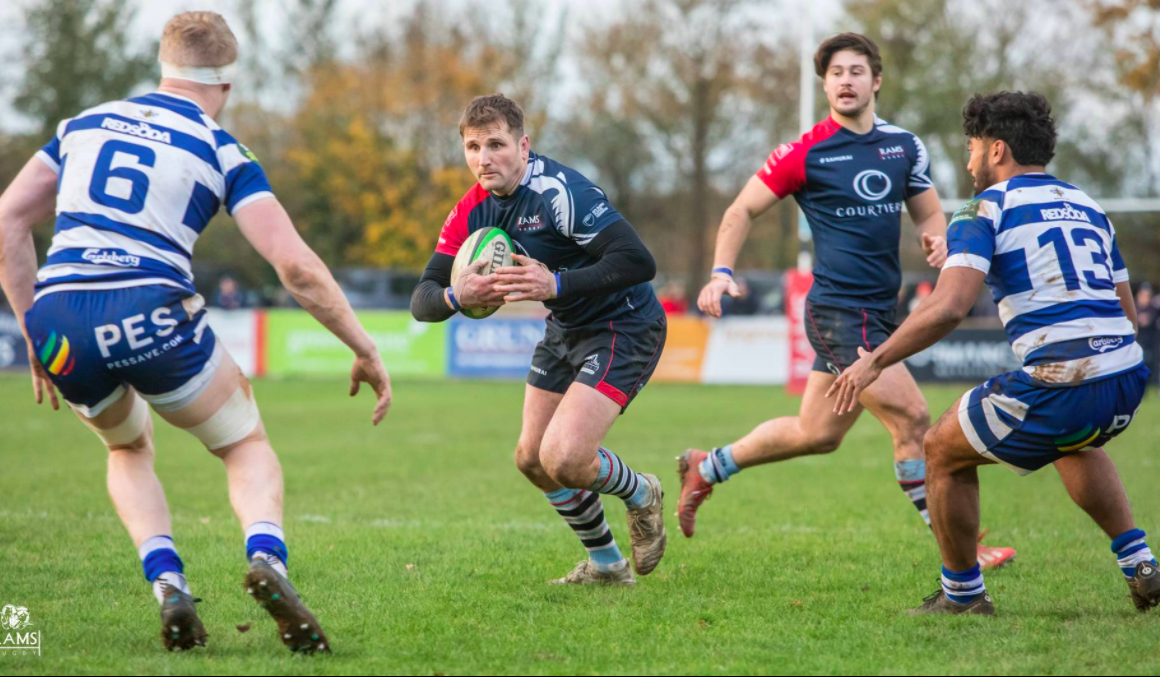 Stapley, who is the current captain of National One league leaders Rams RFC, looks back on a memorable derby day victory over Chinnor and stresses the importance of the table-toppers returning to winning ways following the Christmas break (Photo Credit: Paul Clark)

“Of course, I remember it well. It always sticks in my mind playing against Chinnor. That one is unforgettable, though. My little boy comes along and watches now so it is nice!”

“The hat-trick, I think I was just the man in the right place at the right time! It was a little bonus for sure!”

The Rams RFC captain is reflecting on the last time his side met their local rivals Chinnor at Old Bath Road back in March. Scoring a hat-trick on derby day is something that will always live long in the memory but it came after a whirlwind 24 hours.

His partner, Emily, had given birth to their second child, Arlo, earlier that day with the Rams skipper admitting he’d had a combined total of two and a half hours of sleep before delivering a man-of-the-match performance in a 38-22 victory. “I will be able to tell him that story when he grows up. He will like that!” jokes Stapley.

With many across the country experiencing sub-zero temperatures, there will be no stardom for Stapley this time around as Rams’ latest meeting with Chinnor couldn’t quite beat the freeze.

And as much as the Rams faithful would’ve loved to see their captain in the limelight again this weekend, individual eye-catching performances won’t be top of the agenda for the Berkshire outfit when the action resumes in the New Year.

At the end of November, Seb Reynolds’ side were on the march. Eleven successive bonus-point victories had created a seven-point lead at the top of National One, but there has been no Christmas cheer around Old Bath Road since the beginning of this month.

Consecutive losses against Sale FC (2nd) and Cinderford (5th) means Rams’ advantage at the summit has dissolved and they could be knocked off top spot by the aforementioned Sale – who are level on points with them – this weekend.

“There are things we have to look to improve on and fortunately, I think every game has been like that,” admits Stapley.  “Whether we have won or lost, we have always been able to look at the game and have areas we can improve on. There are just a lot more areas after the last two weeks to look at and really pull together like better decision-making, better atmosphere, better attitude, and not expecting it to just happen for us.

“It is hard. We put a bit of a target on our back by doing so well and it got to the stage where we had three big games before Christmas and it is like; ‘win or lose here, we have still got just as much pressure’ so it is trying to handle the fact that whether you win or lose, the pressure is still there.

“Ideally just keep winning because if you now lose, the pressure is then to get back to winning ways and unfortunately we didn’t bounce back. You can’t go to Cinderford and give away the amount of penalties we did and not manage the game in the way we should have and expect to win.”

REACTION: 'YOU CAN'T WIN @cinderfordrfc WITH THAT PENALTY COUNT

Seb admits hosts deserved victory to round out first half of @Natleague_rugby season! pic.twitter.com/3kmywu8RTU

Although they have tasted defeat in their last two outings, the position Rams have put themselves in heading into 2023 cannot be an afterthought.

The club have been competing in National One for three seasons and their methodical rise up the standings is admirable considering the majority of the current squad who have helped Rams climb the English rugby ladder are still plying their trade at Old Bath Road.

Throughout their journey to the third tier, Stapley has always seen Rams as the ‘underdogs’ and it is a tag he wants to reinforce because he believes that specific mindset brings out the best in the squad.

“We can’t be completely negative about things,” says Stapley. “We have got to appreciate what we have done is really good but equally you can’t rest on that. You can’t think; ‘we have had 11 wins in a row, that is really good, now we can take it easy!’ No matter who you play, don’t expect to win.

“I think we certainly needed a reality check. I like to always attempt or approach games like an underdog. I would rather be an underdog and I try and sort of get that across to the guys. We have got to go out there and we have got to earn this. I do try and get that across from the word go because I don’t like to be a team that turns up and is arrogant about things. You want to have some confidence but you can’t turn up and just think you are going to win.”

That emphasis on staying grounded is something which isn’t new to this Rams side so with that in mind, Stapley knows he and his teammates have the capability of arresting this mini dip in form in the New Year.

Chinnor will also be itching to return to winning ways but they have had contrasting fortunes compared to Rams. Following a seventh-place finish in 2021-22, the Oxfordshire club recorded just two wins from their opening 10 games of this term which resulted in the Black and Whites parting ways with Director of Rugby Richard Thorpe.

We felt it was time to have a catch-up with our new DoR, @nick_easter 🏉

The former defence and forwards coach at Worcester Warriors is yet to take charge of his first game with both this clash against Rams and last week’s fixture with Bishop’s Stortford unable to escape the cold weather.

Stapley recognises the talent within the Chinnor ranks and does see how the arrival of Easter could boost their morale but last season’s star of the show at Old Bath Road is very much focused on his side heading into 2023.

“For him [Nick Easter], he is trying to get a team with a lot of good players to knit together. A friend of mine plays nine there and when I spoke to him I said; ‘your season will come together, you’ve got too many quality players for it not to come together’ and I think that is a really good sign for Chinnor. I am sure Nick will also add a lot of value to the club and it will bring something different for sure.

Round 14’s action begins with Friday Night Lights when Rosslyn Park (4th) host Esher. The visitors to The Rock have turned their season around in recent weeks as three wins from their last four matches leaves them only two points from safety.

Fylde (2nd) will be keen to continue hunting down table-toppers Sedgley Park when they face near neighbours Preston Grasshoppers at Woodlands in Round 14. The aforementioned Sedge – who currently hold a two-point lead at the top – are not in action this weekend after their fixture against Chester was postponed.

Down at the bottom, Huddersfield will have the opportunity to increase the gap between themselves and the drop zone when they host Otley this weekend because both Harrogate’s meeting with Wharfedale and the North East derby between Blaydon and Tynedale have been called off. Rotherham Titans v Hull Ionians is also postponed.

With North Walsham’s home clash with Bury St Edmunds postponed, Canterbury – who are away to third-placed Tonbridge Juddians – could scoop up some valuable points from this Kent derby as they look to distance themselves from danger. The City Men are four points clear of the bottom two so a result at The Slade would certainly be an early Christmas gift.

Rochford Hundred are a club who are currently floating above the dreaded dotted line but they have a chance to give themselves a bit more breathing space when they take the four-mile journey to local rivals Westcliff as part of our double bill on The National League Rugby Review Show.

At the top of the division, Blackheath  – who will be in pole position for Christmas – host Sevenoaks at Well Hall and they will have the chance to extend their lead at the summit due to Old Albanian’s clash with Henley Hawks being postponed.

Elsewhere in National Two East, Dorking (4th)’s meeting with  Worthing Raiders (5th) is also off but Barnes do entertain Guernsey Raiders in the capital.

All eyes will once again be on the foot of National Two West this weekend as four of the bottom five sides meet in Round 14. Stourbridge – who currently prop up the division – take on Loughborough Students but they will most certainly have an eye on the fortunes of the teams directly above them.

Bournville are the other club currently in the relegation places and Mitch McGahan’s men host Newport (Salop), with just three points separating the pair. Ahead of them are Barnstaple and Hornets who collide at Pottington Road after both teams picked up excellent victories last time out.

It is a similar scenario at the top of National Two West with four of the five frontrunners facing one another on Saturday. League leaders Leicester Lions will be aiming to cement their place at the summit when they host Hinckley (3rd) while Clifton (2nd) are targeting an immediate return to winning ways when they entertain Dings Crusaders (5th) in an all-Bristol affair.

Redruth (4th) welcome Exeter University to The Recreation Ground while Luctonians’ visit Old Redcliffians has been called off.