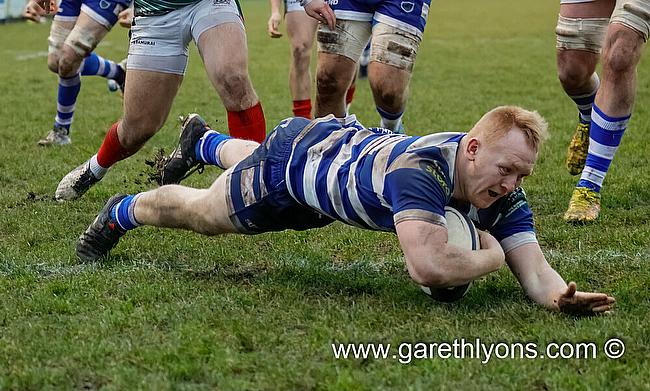 Last weekend, Jonathan Keep’s Sale FC churned out their 10th victory in a row to maintain their spot at the summit of National One. Once again, the North West side find themselves in the promotion conversation but the overall picture towards the top of the third tier will look completely different following their mouth-watering clash with Cambridge (3rd) on Saturday.

‘The Dogs’ are currently three points ahead of nearest challengers Rams RFC (2nd) – who are not in action in Round 17 as their match v Darlington Mowden Park has been postponed due to a frozen pitch – and they are 10 clear of Cambridge but intriguingly, Richie Williams’ troops have two games in hand over the league leaders so the Blood and Sand will arrive at the CorpAcq Stadium knowing a result this weekend could keep them in control of their own destiny. Sale have lost on just two occasions this term but one of those defeats was against Cambridge so if you mix all of these little sub-plots together, we should be in for a cracker.

Switching to the other end of the division, Leeds Tykes have another opportunity to try and boost their survival hopes while also taking points off one of their possible relegation rivals. After falling to a defeat against Esher last time out, Jon Callard’s side – who are currently eight points from safety – travel to Chinnor, who have made the ideal start to 2023 thanks to back-to-back victories.

Bottom-of-the-table Hull will be looking to build on positive showings against Rams and Rosslyn Park when they entertain Birmingham Moseley while Taunton Titans – who are seven points adrift of safety – go to Cinderford and an in-form Esher host Plymouth Albion. Elsewhere, Rosslyn Park hit the road to face Bishop’s Stortford.

Before Sedgley Park beat Hull Ionians back in October, both sides had made strong starts to the campaign. It looked like the two teams were well set to challenge towards the top of National Two North and as they prepare to meet again, that is exactly how it has panned out.

Since their last meeting, Sedge have continued their winning streak and enter Round 17 with 14 successive victories to their name and they remain the only side across National League Rugby yet to suffer a defeat in the 2022-23 season. Scott Barrow’s charges are three points clear of second-placed Fylde – who travel to bottom-of-the-table Blaydon on Saturday – so another triumph at Brantingham Park would only strengthen The Tigers’ title bid.

The latest twist in the #Nat2n title race comes at Brantingham Park and it is our Key Game on The National League Rugby Review Show!

But their hosts will be absolutely determined to stop them in their tracks. Hull Ionians – who sit third in the division and 11 points behind Sedge – had their promotion hopes dented in Round 16 when they were beaten by rivals Fylde but their only losses this term have come against the top two. However, if the I’s are to remain as title challengers, you get the feeling that only a win will do on Saturday for Graham Steadmen’s side.

Shifting the focus to the wrong end of the table, Harrogate may well have been targeting this weekend’s clash with Huddersfield as an opportunity to spark their revival back into life. The Yorkshire outfit have begun 2023 with fixtures against Sedgley Park and Fylde, and successive losses leaves them 11 points from safety with a game in hand. Field are two places above Martyn Wood’s men but a superb run of four wins from their last six games might make them a tougher proposition than first thought.

In between those two teams sit Preston Grasshoppers who will be keen to return to winning ways when they host Sheffield while elsewhere, Otley take on Tynedale, Chester entertain Sheffield Tigers and Rotherham Titans welcome Wharfedale to Clifton Lane.

There is an interesting theme in National Two East this weekend whereby the three teams behind league leaders Blackheath all take on the three clubs who are currently directly above the relegation zone. Well, perhaps it isn’t that interesting but the outcome from this trio of fixtures will have a bearing on the top and bottom of the division.

With Worthing (3rd) visiting Canterbury and fourth-placed Barnes going to Sevenoaks, Dorking (2nd) are left with a trip to Rochford Hundred. Armand Roux’s side continue to have a wonderful season following promotion last year and back-to-back wins over Barnes and Sevenoaks to begin 2023 leaves them eight points off the top.

The Red and Whites enter this weekend having lost just one of their last seven games while in contrast, Rochford Hundred have only secured one victory in that same time frame. During that period, Danny Cleare’s men have faced three of the top four sides and they will make it a full house at The Rugby Park on Saturday. It doesn’t get any easier for the Essex outfit but with rivals Sevenoaks and North Walsham to come in the next two weeks, perhaps Rochford Hundred will go into their latest clash against a promotion challenger with a ‘nothing to lose’ mentality.

Elsewhere across the division, league leaders Blackheath will be aiming to maintain or extend their nine-point gap at the summit but they face a tricky test away at Bury St Edmunds while Old Albanian (5th) host Westcliff, Tonbridge Juddians go to Guernsey Raiders and second from bottom North Walsham travel to Henley Hawks.

Old Redcliffians may have only recorded five wins this season but the successful Saturday afternoons they have experienced in National Two West could prove crucial heading into the final third of the campaign. Craig Owen’s side will still be looking over their shoulder as they sit just seven points clear of the drop zone but all five of their aforementioned victories have come against the cluster of teams who are directly below them in the standings.

The Bristol outfit also have two games in hand – which could be worth their weight in gold further down the line – but for now, they will want to continue that sequence of beating their relegation rivals. Bournville are the visitors to Scotland Lane in Round 17 and their try bonus-point last weekend in defeat against Dings Crusaders means The Chocos are currently only in the bottom two because Newport (Salop) – who sit one place above them – have won one more game than they have.

The jostling for position in this eye-catching battle at the foot of the division has been fascinating to watch and it is sure to continue this weekend, especially with Hornets also taking on bottom-of-the-table Stourbridge at The Nest.

Hot off the press 🗞️

Some photos from the battle against @cliftonrugby this past weekend. A gutsy and tough loss for the squad, now we focus on this coming weekend.#UTR

Meanwhile, a Barnstaple side – who have won three of their last four games – visit Luctonians and Newport (Salop) welcome third-placed Redruth to Shropshire.

Redruth are currently 14 points behind league leaders Leicester Lions who continue their pursuit of the title against Dings Crusaders on Saturday. In a run which stretches back to February last year, Gareth Collins’ side have lost just two of their last 25 games. The only team to beat them? Dings Crusaders.

Second-placed Clifton will be hoping for more of the same as they look to get their own job down away at Exeter University while there is also an all-Midlands affair as Hinckley host Loughborough Students.