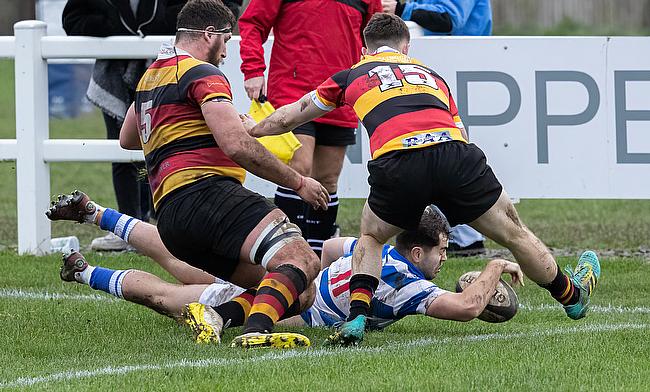 Despite there still being a long way to go in this campaign, picking up crucial wins against rivals and collecting bonus points could be vital further down the line. (Photo Credit: John and Barbara Austin)

Esher took another step towards moving themselves out of danger in National One as a 34-0 victory over rivals Hull leaves them just one point from safety.

Peter Winterbottom’s side had lost nine matches on the trot but back-to-back wins have sparked their campaign into life.

First-half tries from Harvey Scott, Pierre Thompson and Andrew Hamilton put the EEEs in command before Joe Vajner’s score and a penalty from Sam Morley rubber-stamped the result for the hosts.

The Surrey outfit are now level on points with Leeds Tykes after a late Matt Burke try helped them to a dramatic 21-21 draw against Birmingham Moseley. The Midlands club received two yellow cards in the final three minutes, and the Tykes No.8 took full advantage to grab a share of the spoils.

📺 The National League Rugby Review Show: Round 11@WMuggleton hosts from @Hinckley_Rugby and brings you the best of the action from the final weekend of November.

Chinnor are the side directly above the bottom three as things stand and despite a gutsy display, the Black and Whites fell to a 31-27 defeat away at second-placed Cambridge. Winger Kwaku Asideu dazzled with four tries for the Blood and Sand, who remain seven points off the top as league leaders Rams RFC extended their run of successive bonus-point wins to 11 matches.

Seb Reynolds’ men are yet to drop a point this term but were made to work hard for their latest triumph as they edged past Taunton Titans 27-24 in Somerset.

Elsewhere, Rosslyn Park’s title challenge suffered a setback as they were beaten 13-10 by Plymouth Albion and that result allowed Sale FC to move into third spot after they came back from 24-7 down to defeat Darlington Mowden Park 34-31 in the North West. Meanwhile, a late Nathan Taylor score – his fourth try of the afternoon – clinched a 24-22 victory for Cinderford against Bishop’s Stortford.

The spotlight was on the bottom of National Two North in Round 11 and three of the sides fighting towards the wrong end of the table were all able to pick up points.

Huddersfield may have lost 38-26 to Sedgley Park but Gareth Lewis’ side certainly made life difficult for the league leaders at Lockwood Park.

Mark Goodman and Rhys Henderson crossed for the visitors before Cashel Chilvers dotted down for Sedge’s third try. Lewis Bradley and George Bordill then exchanged scores, but it was first blood to Huddersfield after the interval as Edward Barber scooted over.

Rob Holloway made sure Sedgley stayed in the ascendancy with their fifth try in Yorkshire but a quick-fire double from Laurence Sanderson and Bradley secured a try bonus-point for the home side.

Harrogate picked up a losing bonus-point in a 15-8 defeat against Tynedale while fly-half Edward Keohane scored 15 points for Preston Grasshoppers – who provided a stern test for Hull Ionians (3rd) at Lightfoot Green – but the visitors eventually prevailed to secure a 21-20 win in Lancashire.

Second-placed Fylde are now one point behind Sedgley Park following a 24-5 victory away at Sheffield, Ben Turner grabbing a brace, while Otley’s (4th) fine campaign continued with an excellent 39-26 success over Rotherham Titans. The boot of full-back Callum Irvine guided them to this win as he kicked 16 points at Cross Green.

Also in National Two North, Chester sealed successive home wins by beating bottom-of-the-table Blaydon 31-19 and a trademark display by Mark Ireland from the tee steered Sheffield Tigers to a 34-14 triumph against Wharfedale to record their third victory on the spin.

The top two in National Two East – Blackheath and Dorking – scored 153 points between them and conceded zero as the leading pair showed no mercy in Round 11.

As for Dorking, Austin Emens and Michael McDonald were at the double as the second-placed side ran in nine tries in a 59-0 success against North Walsham.

Dorking runs out 59-0 winners at the big field.

It might not have been as dominant, but it was an equally impressive afternoon for Barnes (3rd) who beat Bury St Edmunds 32-14 in the capital while Old Albanian (4th) got the better of Canterbury 32-20 at The Marine Travel Ground, winger Toby Evans scoring a brace.

Elsewhere, Tonbridge Juddians and Henley Hawks had their hopes of staying in the thick of things towards the top of the table dented after they both suffered defeats in Round 11. Curtis Barnes’ prolific campaign continued as his hat-trick for Worthing Raiders helped them to a 46-34 victory over TJs while Henley’s indiscipline was punished by Sevenoaks as they fell to a 28-24 loss at Knole Paddock.

Meanwhile, Guernsey Raiders dug deep to seal a 40-26 win away at Rochford Hundred.

Tom Burrows’ hat-trick help secure 14-man Bournville their first win of the campaign as they beat Stourbridge 34-29 to move out of the relegation places in National Two West.

After Arthur Morgan had opened the scoring for Stour, four penalties from Max Craven and Burrows’ first converted try of the afternoon put the Chocos 19-5 up.

However just before half-time, lock Stephen Handy was dismissed leaving Bournville with a job to do in the second period.

Tim Bitirim and Dan Rundle went over to cut the gap but either side of the hour, the visitors mustered up replies through Burrows and Rhys Williams to make it 29-17.

Sam Wilson kept things interesting as he got Stourbridge’s fourth but the brilliant Burrows went over again with eight minutes remaining.

This all-Midlands affair – which also saw referee Peter Caunt dish out three yellow cards on top of his red – concluded with Matt Moseley going over to clinch two bonus points for the hosts but Bournville had done enough to claim the victory.

It means Barnstaple’s 31-0 loss to Redruth sees them drop into the bottom two after fly-half Fraser Honey put in an excellent kicking display but it was a much better afternoon for Hornets despite losing 31-26 to promotion challengers Dings Crusaders.

The Weston-super-Mare outfit scored two late tries through Mua Inoke and Bailey Jackson to secure a couple of bonus points which leaves them four points clear of the drop zone.

The victory for Dings keeps them in the bronze medal position as table-toppers Leicester Lions and Clifton (2nd) also picked up wins in Round 11. After a nip and tuck first 40, the Lions dominated the scoreboard in the second half to defeat Loughborough Students 34-28 while it was a much more straightforward afternoon for Clifton as Bradley Tablot’s hat-trick helped them to a 55-0 triumph against Newport (Salop).

And in The National League Rugby Review’s Key Game of the weekend, Joe Wilson’s converted try seven minutes from time saw Hinckley edge past Luctonians at Leicester Road. Exeter University’s clash with Old Redcliffians was postponed due to a waterlogged pitch.