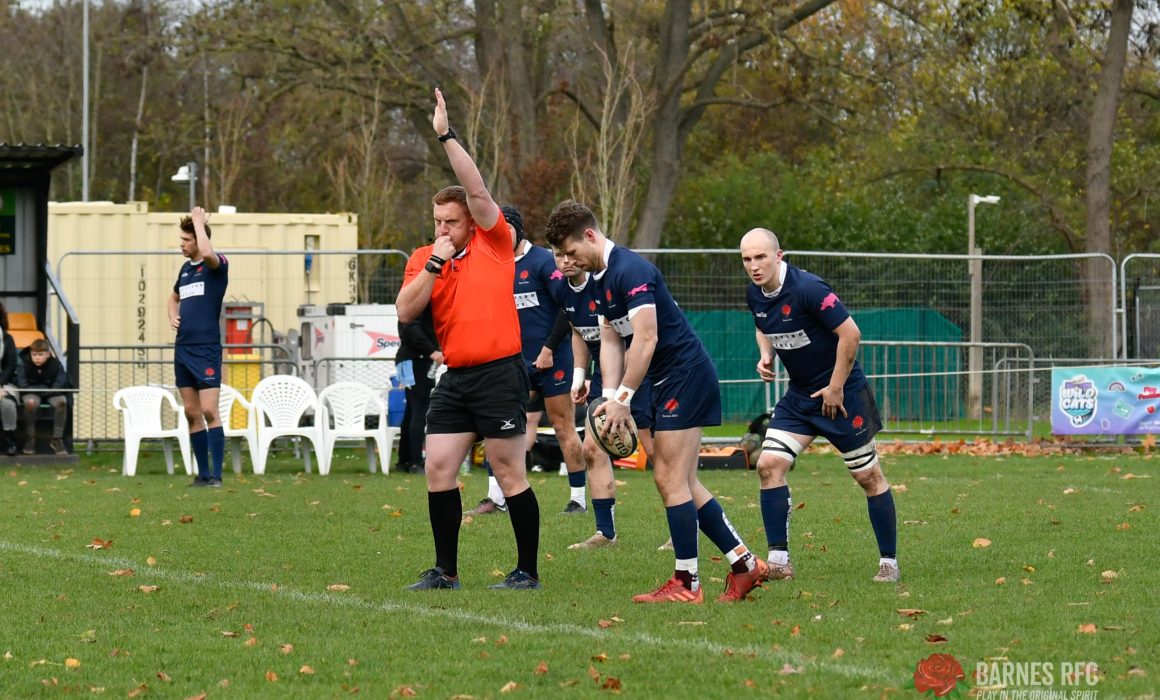 The halfway mark of the season is just around the corner and as December begins, a blend of title dreams and fighting the threat of relegation is on the agenda. (Photo Credit: Johnathan Knight)

Little wonder Gary Pearce says he wants to take last week’s defeat against Esher “on the chin and move on.” The Hull boss admitted for the first time this season that the team were disappointed with their performance as the Yorkshire outfit slumped to a 34-0 loss in Surrey. Their latest defeat – their 10th of the campaign – leaves them rooted to the foot of the table, and the visit of Chinnor in Round 12 falls under the cliche of a ‘cup final’.

Hull are currently eight points adrift of safety and the scale of the challenge ahead will become increasingly difficult if they don’t get the desired outcome on Saturday. As things stand, Chinnor are the side sitting directly above the bottom three and a spirited display against Cambridge last time out should be a source of encouragement for the Oxfordshire club. The Black and Whites are only a point clear of the drop zone so claiming a third win of the campaign this weekend would be most welcome.

We went with @SheffTigersRUFC’s Louis Townsend in our No.1 spot but what was your favourite?

Sandwiched in between Hull and Chinnor are Esher and Leeds Tykes. The EEEs enter December with a spring in their step as back-to-back victories have ignited their National One season. Peter Winterbottom’s men go to Bishop’s Stortford on Saturday while Leeds Tykes will be looking to build on their dramatic draw with Birmingham Moseley when they host second-placed Cambridge.

Preston Grasshoppers so nearly ended their run of five straight defeats with a strong performance against high-flying Hull Ionians in Round 11, but the Lancashire outfit were narrowly edged out. Despite another loss, Joel Unsworth’s troops were able to claim a bonus point for the third consecutive game and those added extras has given the Hoppers some breathing space between themselves and the bottom two.

The men from Lightfoot Green have the chance to potentially stop the rot this weekend when they travel to bottom of the table Blaydon. The incentive to claim a victory on Saturday is huge for both clubs but for the North East side, it might be slightly greater when you factor in they received a five-point deduction last month. Coincidently, they are now five points from safety so clinching the spoils at Crowtrees is a tantalising prospect and one which could be crucial in their fight to stay in this division.

Two other clubs looking to jump away from trouble are Harrogate and Huddersfield. The former take the 57-mile trip to face an in-form Hull Ionians (3rd) in Round 12 while Field welcome Tynedale to Lockwood Park.

At the right end of the table, league leaders Sedgley Park will be aiming to stretch their winning run to 12 matches when they entertain Sheffield while the Steel City’s other side – Sheffield Tigers – visit second-placed Fylde. Elsewhere, an impressive Otley outfit go to Wharfedale and The National League Rugby Review Show’s Key Game comes from Clifton Lane where Rotherham Titans take on Chester.

It might be presumptuous to suggest that if Blackheath (1st) defeat Barnes (3rd) this weekend, then gaining promotion back to National One is ‘Club’s’ to lose. Four points separates the top three sides – with second-placed Dorking very much in the mix – but a success for James Shanahan’s boys on Saturday would just strengthen their title credentials. The men from Well Hall lit up the division last time out with a thumping 94-0 win against Westcliff, but facing Barnes will be a completely different challenge.

Jack Heald’s side have won six of their last seven matches and they will be aware that the current table-toppers are not impenetrable. Blackheath have lost to Old Albanian (4th) and Tonbridge Juddians (6th) this term so a victory for Barnes would once again add another twist to this compelling battle at the summit of National Two East.

🚨 Here is this weekend's Player of the Week from Round 11 in National 2 East: @Blackheath_1858's Tom Ffitch #Nat2E pic.twitter.com/KyeYxAxDAE

As mentioned, Dorking aren’t going anywhere anytime soon and the Red and Whites could move into pole position if the result goes their way in London and they get their job done away at the aforementioned Tonbridge Juddians. Old Albanian – who sit six points off the top host Bury St Edmunds in Round 12 while fifth-placed Worthing Raiders go to bottom of the table Westcliff.

North Walsham – the other team currently in the relegation spots – take on Sevenoaks while also across the division, Henley Hawks face Rochford Hundred and Guernsey Raiders entertain Canterbury.

As the midway point of the season edges ever closer, the half-term reports for Dings Crusaders and Hinckley would certainly be positive. Both clubs have been able to harness their momentum for large portions of the campaign and as the pair prepare to meet in Bristol on Saturday, thoughts of a promotion challenge could well be on their respective radars.

Dings enter December third in the standings and just six points behind table-toppers Leicester Lions – who have had their fixture called off against Stourbridge this weekend – after bouncing back in Round 11 by gaining a hard-fought victory over Hornets. As for Hinckley, they too battled their way to success last time out as they defeated Luctonians and it leaves the Midlands outfit fourth and 10 points off the summit. Genuine hopes of a title bid might not entirely rest on this game, but the winner would obviously boost their chances heading into the final two fixtures of 2022.

Second-placed Clifton remain in the hunt and next up for the Lavender and Blacks is a trip to fifth-placed Redruth (5th) meaning four of the top five face one another in Round 12. Both clubs also went toe-to-toe for the National Two South crown last year so expect a cracker in Cornwall.

Elsewhere, Exeter University visit a buoyant Bournville – after they picked up their first win of the season last Saturday – and Luctonians entertain Newport (Salop) while Loughborough Students go to Barnstaple and Old Redcliffians take on Hornets.