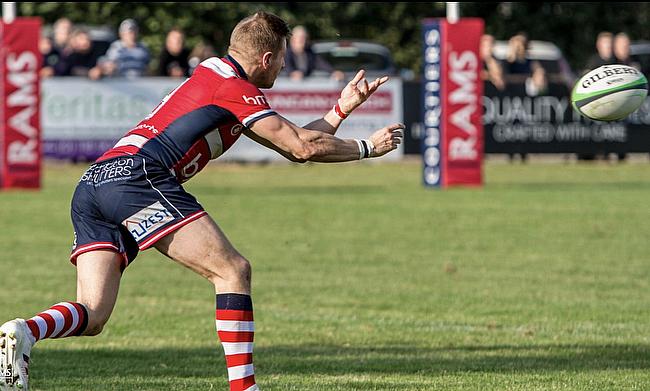 Rosslyn Park halted Cinderford’s winning streak and the National One league leaders were not the only side to see a good run of form conclude in Round Nine. Photo Credit: (Paul Clark)

Rosslyn Park No.8 Hugo Ellis scored twice as his side beat Cinderford 38-31 to end the Foresters’ unbeaten start to the season.

In this top of the table clash, Ellis dotted down in each half whilst Jack Gash, Nick Lovell, Henry Spencer and Charles Piper also crossed.

George Boulton’s brace and a score from Nathan Taylor had given Cinderford a 24-19 advantage, but the league leaders could only manage a penalty try in the second period as they slipped to their first loss of the campaign.

Paul Morris’ side now have a seven-point lead at the summit whilst Park are up to second.

Sale FC’s fabulous start to the season continued as a 32-21 triumph over title candidates Rams RFC marked their first away win of the campaign.

Winger Nev Edwards grabbed a hat-trick at Old Bath Road as the visitors took control of this fixture either side of half-time.

Max Hayman and Jak Rossiter both scored to put the hosts in front, but two from Edwards, plus Will Davies’ effort, gave Sale a 19-14 advantage at the break.

Edwards’ third and five points from the boot of Chris Johnson extended Sale’s lead, but despite Hayman’s second try of the afternoon, Johnson was able to seal a historic victory for the away side with a pinpoint drop-goal.

Plymouth Albion were unable to climb out of the bottom three as they were beaten 26-7 by Caldy, who are now unbeaten in six games.

Albion went into the match on the back of two victories, but the Wirral outfit dominated the scoreboard to continue their excellent recent run of form.

Caldy led by two tries to one at half-time thanks to Michael Cartmill and Adam Aigbokhae, whilst Alex Ducker scooted over for Plymouth.

But that was as good as it got for the hosts as Lucas Titherington and Elliot Gourlay wrapped up the bonus-point win for Gareth Davies’ side.

Chinnor ended a three-game winless streak as a ruthless first-half display saw them defeat Tonbridge Juddians 34-15 at The Slade whilst two in-form sides, Cambridge and Darlington Mowden Park, drew 26-26 with Warren Seals’ late penalty snatching a share of the spoils for the North East club.

Tom Ailes scored twice in the first-half, either side of Andy Riley’s try, to give the table toppers a 17-0 lead at the break.

Luctonians profited from a Steve Collins yellow-card and were awarded a penalty try just after the hour, but further scores from Danny Openshaw and Matt Riley secured the bonus point for Sedge.

And the Tigers completed the afternoon with a penalty try of their own to move four points clear at the summit.

Hull remain second in the division despite their six-match winning run coming to an end as they were beaten 20-15 by Rotherham Titans.

Like Sedgley Park, the Titans are also undefeated this term but were behind at the interval as Tipiloma Kivalu’s try gave Hull a slender 5-3 advantage.

The visitors moved further in front when Charlie Beech crashed over, but on 58 minutes, the Rotherham revival began.

Callum Bustin dotted down and even though Simon Humberstone added a penalty for Hull, the Titans were able to clinch the win in the final 10 minutes through Harry Newborn and the boot of Lloyd Hayes.

🗣 It was a massive relief! Outstanding to get over the line and get a result.

🎙 @Broaders13 reacts to a third win on the bounce for @SheffTigersRUFC!

Watch the best of the action by subscribing to The National League Rugby Review Show for just £7!! 👉 https://t.co/nRgehxuxxx pic.twitter.com/w5EYZVMi93

Fylde are only six points off the summit as a clinical final quarter helped them to a 40-20 victory over Blaydon.

Both sides were shown two yellow cards apiece in the North East, but despite Fylde losing David Fairbrother and Ben O’Ryan, they did lead 22-13 at the beginning of the second-half.

Sam Fisher (2), Tom Grimes and Matt Sturgess all crossed for the Lancashire outfit, whilst eight points from Nathan Horsfall and a try from Sean Pyle kept Blaydon in touch.

With O’Ryan in the bin, along with Blaydon’s Austin Phillips, the hosts reduced the arrears to two points as Owen Chaplin went over, but Fylde were then able to take control of this contest.

Two penalties from Greg Smith and a second score for Grimes made it 33-20 and when Blaydon’s Ethan Clarke was shown a yellow card, Tom Carleton grabbed his customary try to wrap up the win for Fylde.

Stourbridge are now the only side across the National Leagues to have won all their matches this season as they clinched a seventh straight win by beating Wharfedale 30-20.

Four yellow cards were also brandished in this contest and despite the game being level on the hour, tries from Mark Harrison and Dan Rundle sealed the victory for Neil Mitchell’s charges.

Elsewhere in National Two North, Hull Ionians staged a quite remarkable second-half comeback to beat Bournville 46-43. The hosts had led 43-12 shortly after the break, but the I’s scored 34 unanswered points to complete an astonishing turnaround in the Midlands.

Also in the division, Sheffield Tigers clinched their third win on the bounce after beating Loughborough Students 33-31 in a topsy-turvy affair in front of the National League Rugby cameras whilst scores from Harry Wilkinson and John Craven proved to be enough for Chester as they beat Harrogate 14-11.

Ken Dowding’s try two minutes from time was enough for Worthing Raiders to snatch a 34-32 win over Barnes as they moved back to the top of National Two South.

Henry Birch opened the scoring for the Sussex side – who had been knocked off the summit in Round Eight – but a brace from Cameron Leigh and 10 points from the boot of Josh Hammett gave Barnes a 20-14 half-time lead.

Harrison Sims had gone over for Worthing before the break and it was first blood to the Raiders after the interval as Matt McLean slotted a penalty.

Hammett then increased the lead for Barnes by converting his own try before Nathan Jibulu and Josh Davies traded scores.

However, the final 10 minutes would prove decisive for Worthing as a penalty try cut the lead to three points before Dowding crashed over to clinch the win.

Redruth are now three points behind Worthing as they ended Guernsey Raiders’ seven-match winning streak by grinding out a hard-fought 27-21 victory.

The Channel Islanders had begun Round Nine at the top of the division but were behind at the break thanks to Joel Matavesi’s score and eight points from Fraser Honey.

Douglas Horrocks had crossed for Guernsey in the opening period and the hosts were able to nudge themselves in front when Hugo Culverhouse crossed the whitewash.

Redruth then put their foot on the pedal as two tries in nine minutes from Jack Oulton and Kyle Bradley gave them a 27-14 lead.

Tom Ceillam’s converted effort eight minutes from time set up a tense finale at Footes Lane, but the Reds held on to their seventh victory of the campaign.

Redruth do have a game in hand over Worthing, but Esher are also very much in the title race picture after beating Clifton 32-12 at Molesey Road.

Harry Bate and Finlay Sharp both scored in the first-half for Clifton to give them a 12-8 lead, with Chris Davies going over for Esher.

However, the hosts were ruthless in the second 40 as Jack Lavin, Theo Skoumbourdis and Andrew Hamilton all went over to secure a third win on the trot for the Eees.

Old Albanian will also feel they are in the mix for top spot after a hat-trick from Alessandro Ricci helped them on their way to a whopping 89-0 victory over Westcliff.

Also in National Two South, Harry Tovey marked his 100th appearance for Dings Crusaders with a try as his side sealed a 48-24 success over Barnstaple and two scores from Will Panday helped Henley Hawks to a 19-10 victory away at Canterbury.