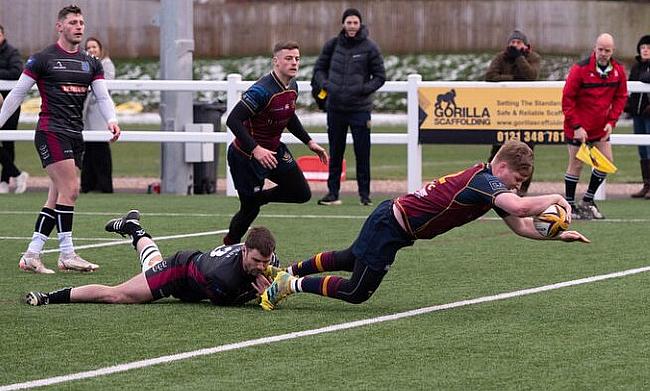 Rosslyn Park ran in seven tries and eventually overcame a stubborn Esher outfit as they secured a 48-32 victory at The Rock.

Kieran Power’s men trailed to tries from Finlay McBrearty and Ben Fitzgerald but Park hit back as Joe Luca Smith’s effort – to add to earlier scores from Seb Strang and Benji Marfo – put the hosts in front.

Oliver Norris and Smith swapped tries either side of half-time before the boot of Sam Morley made it 25-24 to Esher after 47 minutes.

However when Esher’s Jack Rouse was shown a yellow card, Charles Piper and Harry Ledger touched down in his absence before Henry Spencer crossed to effectively take the game away from the EEEs .

But Peter Winterbottom’s charges rallied and did secure a try-bonus point with two minutes remaining thanks to Dan Rowland.

That late score leaves Esher just one point from safety in National One and 15 points from their last five matches has given them more than just a fighting chance of escaping the relegation places. As for Park, they are up to third after this victory.

With Rams not in action at the weekend, Sale FC took the opportunity to move to the summit of National One following a hard-fought 20-15 win away at Leeds Tykes.

After being 15-7 down at the break, the North West club battled back to clinch the victory as Jake Barron’s score five minutes from time proved decisive. Following successes over Rams and Rosslyn Park, Jonathan Keep’s men made it a full house for December and now hold a four-point lead at the top heading into the New Year.

In terms of Leeds Tykes, there may well have been a sense of disappointment considering they came extremely close to upsetting the applecart but there were certainly a lot of positives for the Yorkshire outfit to take going forward with the gap between themselves and the safety positions down to just three points.

Taunton Titans are the team both Leeds Tykes and Esher are chasing down, and they were unable to move away from the drop zone after falling to a 26-14 defeat at Plymouth Albion.

Rochford Hundred have created further breathing room between themselves and the bottom two in National Two East as Caley Gray’s hat-trick helped Danny Cleare’s side to a 22-16 derby day triumph over Westcliff.

The first half ended with Rochford 17-10 to the good, with David Rufai’s score sandwiched in between Gray’s double. James Scogings went over for Westcliff before Greg Bannister pinged over three points.

Bannister was on target with the boot again shortly after the interval but the visitors continued to look strong at the set-piece and from another line-out, Gray was able to storm over to stretch their advantage.

Despite the weather wreaking havoc on the weekend’s action, @WMuggleton brings you highlights of the 7 games that did beat the freeze 🥶

But the home side kept battling and they were able to collect a losing bonus-point as Bannister concluded the scoring with his third penalty of the afternoon.

Victory for Rochford Hundred – their first since the middle of October – means they are 11 points clear of the relegation zone but North Walsham do have a game in hand.

At the other end of the table, tries from Cameron Roberts, Paul O’Dell, Patrick McDuell and Cameron Hudson helped Barnes to a 26-14 win against Guernsey Raiders, a victory which lifted them to second in the standings.

Bournville have moved out of the relegation places in National Two West as they defeated rivals Newport (Salop) 22-12 in the Midlands.

Jack Cantelo’s score and five points from the tee via Max Craven put the Chocos into a 10-7 lead.

Chris Perry had touched down for Newport (Salop) but it was first blood to the hosts after the half-time interval as Ethan Walker dived over in the corner.

The away side hit back as a lovely move was finished off by winger Fred Bailey but it was Bournville who had the final say on 61 minutes when James Burgoyne dotted down from close range.

The result sees Mitch McGahan’s troops leapfrog Newport (Salop) and now there is just a solitary point separating the sides.

Bottom of the table Stourbridge will have a mountain to climb in 2023 as they suffered their 13th loss of the campaign after they were beaten 34-21 by Loughborough Students. Stour are 13 points adrift of safety so can they turn their fortunes around after the Christmas break?