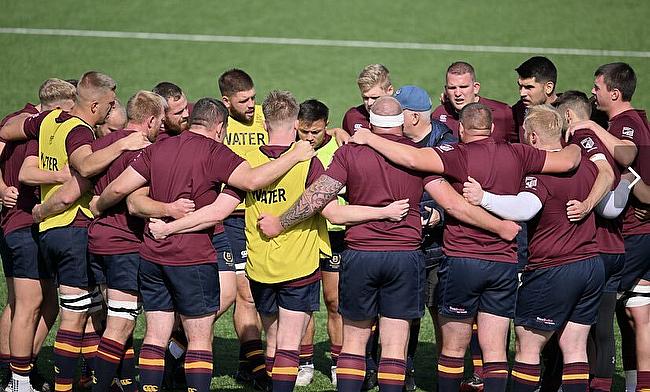 After a tough start to the National League Rugby season, the final weekend of November offers a chance for those scrapping towards the bottom to spark their respective campaigns into life. Photo Credit: (Andrew McCumiskey)

The results of both Esher and Hull in Round 10 added a new dynamic to the battle to avoid relegation in National One and as National League Rugby returns this weekend, the bottom two sides in the third tier go head-to-head in what feels like a very significant game.

Last time out, the EEEs’ 41-33 away win at Chinnor was their first victory since gaining promotion from National Two South and now Peter Winterbottom’s side are just four points from safety. Their triumph in Oxfordshire was a clear sign that the Surrey outfit belong at this level and the character and quality displayed by Hull in their 30-30 draw with Cinderford also highlighted their value to the third tier.

It was a rollercoaster of emotions for Gary Pearce’s troops as a win and even a defeat looked on the cards during a topsy-turvey affair in Yorkshire but the current National Two North champions settled for a share of the spoils, which leaves them eight points from safety.

The fact both clubs halted a run of nine successive losses now gives them a platform to work from, making another positive result at Molesey Road on Saturday worth its weight in gold.

The other side currently in the bottom three with Esher and Hull are Leeds Tykes who host Birmingham Moseley while Chinnor – who sit just above the relegation places – will begin life without Richard Thorpe on Saturday after the Director of Rugby departed Kingsey Road last week.

The Black and Whites face a tricky assignment when they visit second-placed Cambridge in Round 11 and the latter will be hoping to hunt down table-toppers Rams RFC, who will be eyeing an 11th consecutive bonus-point success against Taunton Titans.

Over the last month, Huddersfield have faced two of the top five sides in National Two North and they will conclude November by hosting league leaders Sedgley Park. Their ambitions to move away from danger would have been hampered by this challenging run of fixtures but seeing off Wharfedale in Round Nine was the shot in the arm Gareth Lewis’ side desperately needed.

Field are now four points above safety but widening the gap on Saturday might be difficult against a Sedge outfit who have won all 10 of their matches this term. The Tigers are level on points with second-placed Fylde – who go to Sheffield in Round 11 – but Scott Barrow’s men continue to find a way to win and are yet again towards the right end of the division with Christmas on the horizon. The odds are firmly in favour of the confident table-toppers but can Huddersfield halt them?

Hull Ionians will have one eye on proceedings at Lockwood Park as the third-placed side sit just six points off the leading duo heading into Saturday. Graham Steadman’s charges take on Preston Grasshoppers who may also be interested in the outcome in West Yorkshire considering they are just five points above the dreaded dotted line.

The constant ducking and diving for position in National Two East has dominated the narrative since the beginning of September and as we begin to enter the festive period, both Rochford Hundred (10th) and Guernsey Raiders (9th) will want something to cheer about.

Both sides currently occupy spots above the drop zone – Guernsey 12 points clear, Rochford nine – but their mission to move away from any relegation talk can be enhanced with a victory on Saturday afternoon. Rochford come into Round 11 having won one of their last seven games and this tough run of form came after back-to-back triumphs at the start of the campaign.

As for the Raiders, they have certainly been value for money in recent weeks after being involved in pulsating contests against Worthing Raiders, Dorking and most recently Sevenoaks which have garnered a win, a defeat and a draw.

The likelihood of the outcome of this contest being season-defining is slim considering the unpredictable nature of this division but it would certainly give one of these sides a spring in their step heading into their final three fixtures of 2022.

Elsewhere, Canterbury host fourth-placed Old Albanian this weekend with the visitors to The Marine Travel Ground firmly in the promotion mix as things stand.

Blackheath moved back to the summit last weekend as they took full advantage of their game in hand against Sevenoaks and James Shanahan’s side will be looking to maintain or even increase their four-point gap at the top when they take on bottom-of-the-table Westcliff at Well Hall.

Both Stourbridge and Bournville can give their respective seasons a much-needed boost in Round 11 so it is all to play for when the two sides collide in this all-Midlands affair. Five straight defeats for Stour has added to their tough start to life in this brand-new division but Neil Mitchell’s men are only four points from safety despite picking up just one victory all term.

Ten points from their last six games have kept them in touch with the teams above them and that knack of picking up bonus points also applies to their visitors on Saturday. The Chocos are still searching for their first triumph of the campaign and before Round 10 they had lost nine games on the bounce but remarkably, they are now only one point behind Stourbridge going into the weekend.

A thrilling 38-38 draw against Loughborough Students saw them stop the rot two weeks ago and after providing us with entertainment last time out, their latest meeting with Stourbridge might follow suit. The two fixtures between the teams in National Two North in 2021-22 produced 159 points in total. Bournville did lose on both occasions but this next instalment could prove crucial for the division’s bottom two.

Just above Stourbridge and Bournville are Barnstaple and they face a tough test away at Redruth in Round 11 while Hornets – who hold the position just above the relegation places – host promotion-chasing Dings Crusaders.