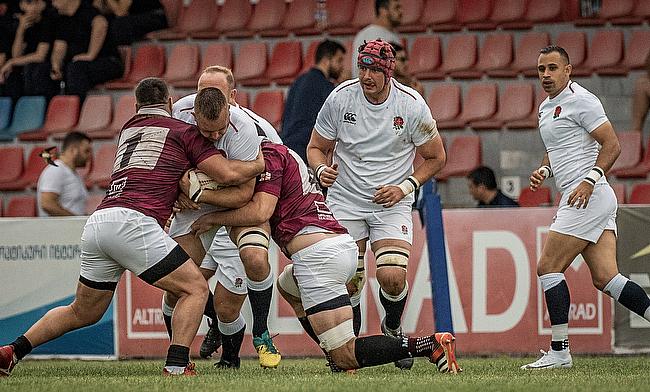 The visitors then repelled pressure from Georgia and were rewarded when Kieran Moffat was put through to score on 28 minutes.

Both sides exchanged penalties before half-time and Georgia fly-half David Modzgvrishvili then cut England’s lead to just two points shortly after the interval.

However, England were able to take advantage of a yellow-card as Moffat touched down for his second and at this point, the tourists looked in control.

But, replacement Revaz Jinjikhadze slotted over a penalty just after the hour and the hosts cranked up the pressure in the final quarter.

And with five minutes remaining, Georgia capitalised on a yellow card shown to Harry Hone and Bujiashvili forced his way over the line for a converted try to condemn England to their first defeat in five years.

England Counties battled to an opening victory in a bruising first Test last Friday and they were able to make a positive start at the Avchala Rugby Stadium as Lound pinged over an early penalty after good England pressure.

But similarly to the first Test, Georgia hit back and slick handling an off-loading by Giorgi Natelashvili eventually led to Putkaradze crashing over from close range.

The hosts had the better of the opening 20 minutes, but England sparked into life before the break as Lound’s second penalty was followed by their first try of the evening as Moffat broke through to score.

Modzgvrishvili and Lound swapped penalties before half-time before Georgia nearly went in front, but some superb work from Rosslyn Park’s Steven Leonard kept the home side out.

Georgia were able to add to their tally almost immediately after the interval with another three points from the tee, but their efforts to move ahead in this contest were hampered when Guram Shengelia was yellow-carded.

England then camped themselves in the Georgia 22 and Callum MacKenzie thought he had scored his second try in as many games after brilliant work from Hone in the maul, but the ball was knocked-on in the process.

But, England didn’t have to wait too long to cross the whitewash as Old Elthamians’ Moffat rounded off a scintillating move after the centre latched on to a perfectly timed pass from Nick Hankin.

After controlling the third quarter of this contest, England had to turn their attention to defensive duties in the final 20 minutes as Georgia mounted a revival.

Jinjikhadze’s penalty made it 23-17 and with 10 minutes to go, England were put under serious pressure.

The replacement back then triggered Georgia’s best break of the half which led to Hone being shown a yellow-card and with Georgia continuously knocking at the door, England were unable to hold out their hosts as Bujiashvili powered over from close range and Jinjikhadze held his nerve to clinch the victory.